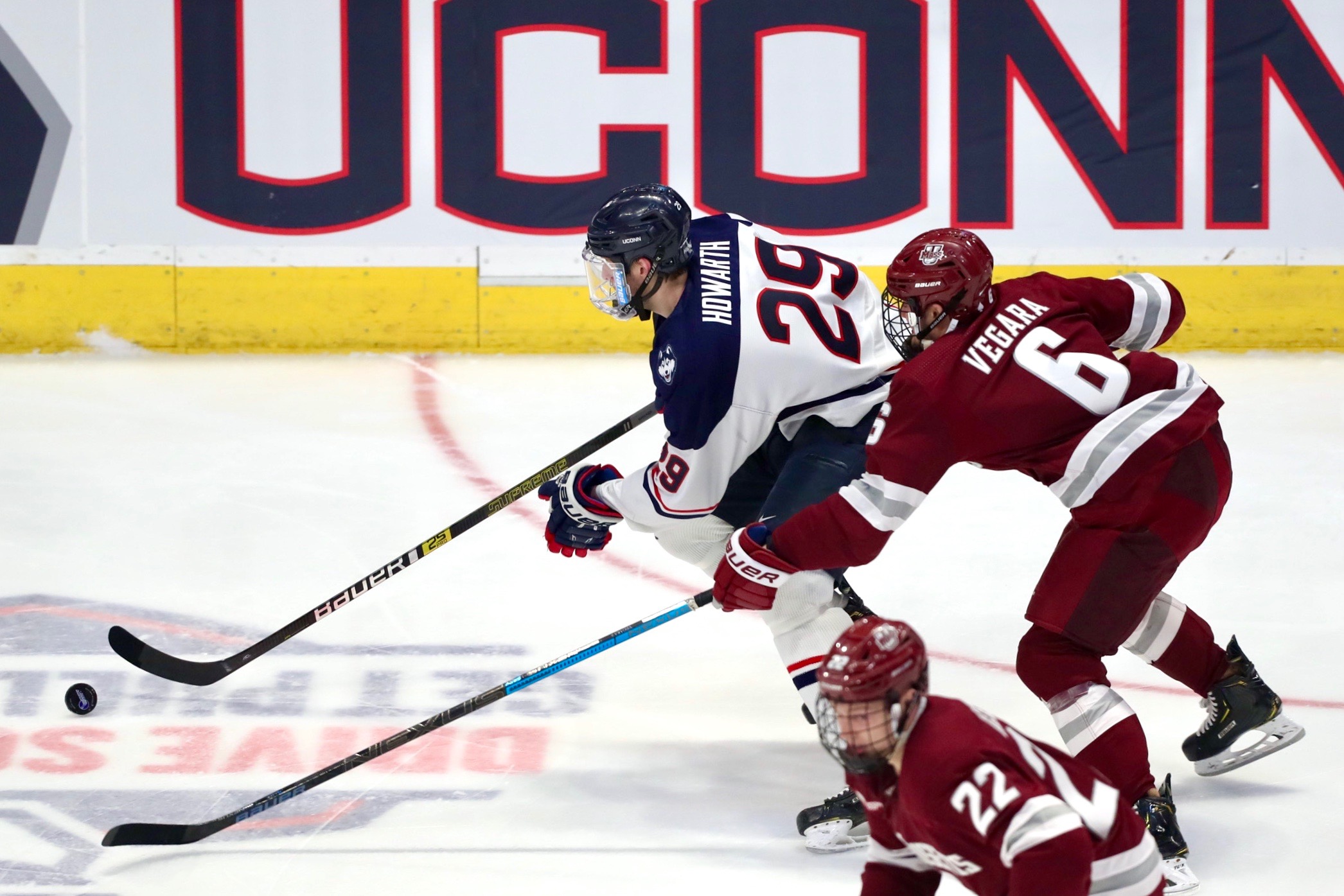 Hartford, CT- On January  11th, the Connecticut Huskies dropped their fourth straight game and sat at 7-10-4. Two weeks later, UConn finished in last place at the Connecticut Ice Festival and appeared headed for another frustrating end to a disappointing season. Yet, Mike Cavanaugh kept his team on track. His Huskies won five out of their next six games and welcomed the injured Massachusetts Minutemen looking for another standings climb. The home team got it in dramatic fashion.

The opening frame was scoreless, but provided quality looks for both sides. Goaltenders Tomas Vomacka and Filip Lindberg closed the doors on 8 and 11 shots respectively in the first.

UConn broke the scoring ice near the second period’s mid-point. Freshman defenseman Carter Berger drove up the left wing and beat Lindberg with a patient and sharp shot inside the right post. The Florida Panthers’ draft pick from N. Vancouver, British Columbia, hadn’t scored since collecting an assist in the opening game of the Ledyard Bank Classic against St. Lawrence on December 28th.

UMass turned to their best player to answer the goal. John Leonard fluttered a shot through the UConn defense from the point to tie the game. The Amherst, MA, native gave his team the lead in the third. After a controversial interference penalty against UConn, Leonard punched home his second of the game and his 26th of the season. He leads the nation in goal scoring, sitting three goals ahead of Northern Michigan’s Griffin Loughran.

Filip Lindberg held his own amidst a third period UConn onslaught. He recorded 11 of his 35 saves in the third period. But he and the Minuteman defense could not hold the lead.

With 1:31 left to play, Marc Gatcomb slipped through the defense and backhanded a puck into the net to tie the game. To reinforce the similarities with UConn’s game against BU the week prior, Kale Howarth broke free and notched the game winner with eight seconds left in the game. The crowd of 6,666 nearly blew the roof off  the XL Center as UConn closed out their dramatic 3-2 victory.

UMass drops to 19-11-2 (12-8-2 HEA). The Minutemen entered without Cal Kiefuk or Philip Lagunov for the remainder of the season, without Mitchell Chaffee for the weekend, and lost Jeremy Davidson mid-game with an injury.

Despite the depleted roster, Head Coach Greg Carvel didn’t give excuses for his team’s close. “We got what we deserved tonight. Hats off to UConn, they’re playing well and finished the job tonight. It would’ve been stealing a game tonight, but it’s a tough way to lose late in the game. We’ve been a good third period team most of the year. And now that’s two games in the last two weekends we’ve surrendered leads late in the game. Shame on us.”

Leonard recorded his 7th multi-goal game and third in his last four games.

UConn improves to 15-13-4 (12-8-2 HEA). “That was as loud as this building has been since Ive been here,” commented Head Coach Mike Cavanaugh. “I thought our effort was pretty slid for three periods.”

Cavanaugh added observations on his team’s recent confidence up-swing. “Confidence doesn’t come in a pill. Confidence comes from when you continually do the fundamentals and don’t get paralyzed by the result. It’s apropos that it’s senior night because those guys demand that we do the fundamentals day in and day out.”

Carter Berger recorded his first multi-point game of his career, with two assists and a goal.

UConn and UMass are tied for second place in a densely packed Hockey East Conference.

As a result of UConn’s win, Boston College is assured of at least a share of the Hockey East Regular Season Championship and home ice in the HEA Quarterfinals.

These teams renew acquaintances on Saturday night at the Mullins Center at 8 pm ET. Each team plays one more game after this weekend. UMass hosts the Vermont Catamounts in Kevin Sneddon’s final game behind the bench on Thursday, March 5th, at 7 pm ET. UConn visits UMass Lowell on Friday, March 6th. Puck drops at Tsongas Center at 7:15 pm ET.