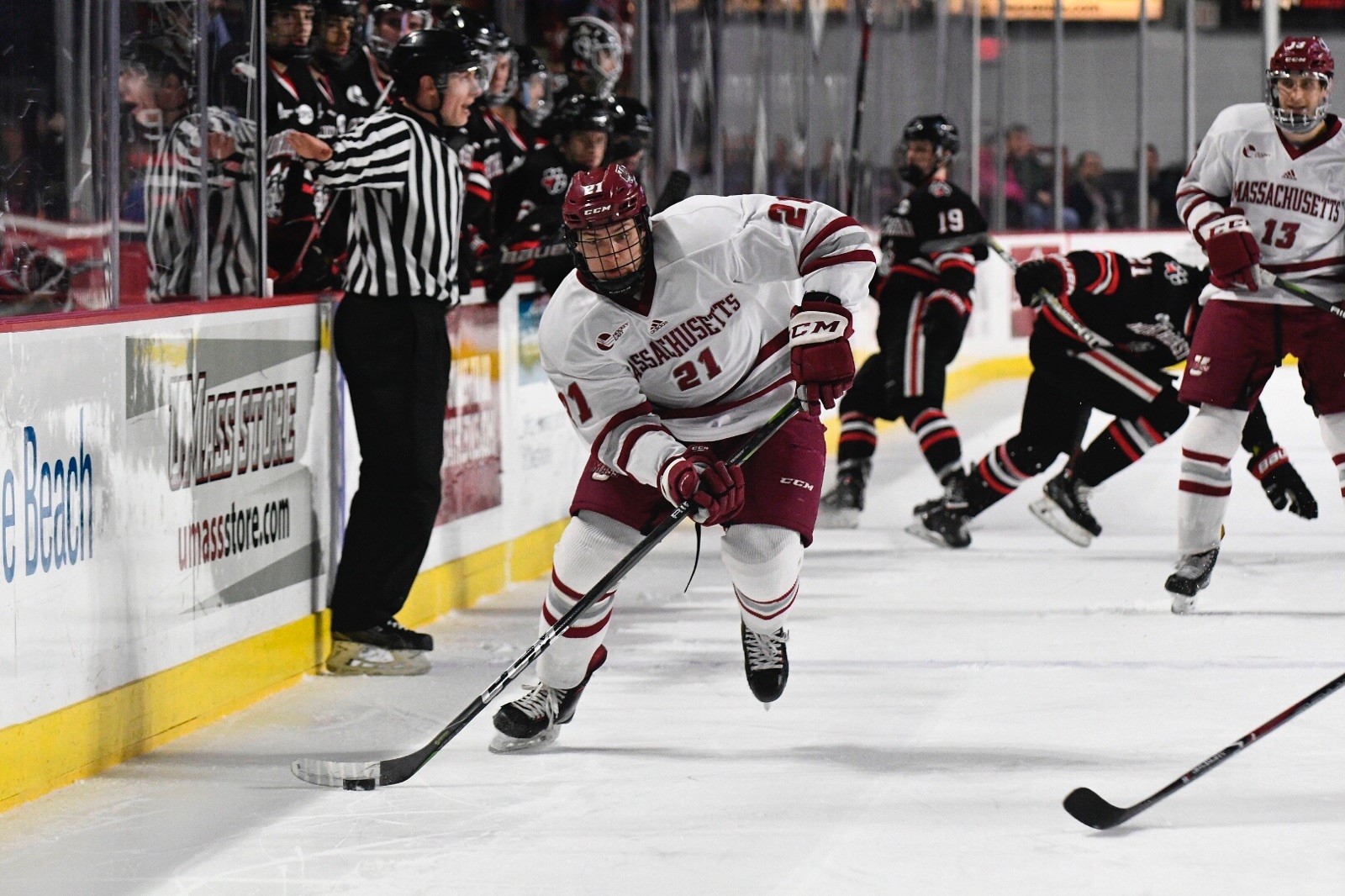 Hartford, CT — The Connecticut Huskies have enjoyed their best season since joining Hockey East in 2014. The team has double-digit victories in conference for the first time and rode a seven-game winning streak into their final game of the regular season on Thursday night, in which they hosted the Massachusetts Minutemen.

UConn looked to win the season series from the Minutemen, finish over .500 for the conference, and secure a first-round bye in the Hockey East Playoffs. Instead, UMass rode a strong performance by Matt Murray in net and some late heroics to knock off the Huskies.

The first period started slowly. Neither team got a shot on net for the first three minutes of action and the ice was slow and chippy. UConn landed more hits and created some momentum with their physicality.

Just after the halfway point, UConn rushed the puck over the blue line, dropped it to Spencer Naas and the senior Alternate Captain fired a puck by UMass Freshman Matt Murray to give UConn a 1-0 lead.

UMass answered back quickly, tilting the ice and winning the shot battle 10-6 for the period. George Mika lugged the puck into the offensive zone and beat UConn goalie Tanner Creel to tie the game 2:40 after Naas’ goal. Less than two minutes later, Austin Albrecht beat Creel off a faceoff to give UMass the 2-1 lead.

The second period was slower, grittier, and more physical. Neither team got double-digit shots. UConn won the shot total 8-7, but neither team established clear control of the frame. The teams traded hits, possessions, blows, and went into the third period with UMass still leading 2-1.

The Huskies tilted the ice in their favor for the final frame, outshooting UMass 12-5. Matt Murray stood tall for much of the frame. But he could not stop everything.

With 1:20 left in the game, Spencer Naas drove to the net and fired a puck on Murray. He made the initial save, but Jesse Schwartz controlled a rebound and put it by Murray to tie the game and excite the XL Center.

UMass did not panic. Twelve seconds later, star freshman defenseman Cale Makar lasered a shot through a pack of screeners and blockers in front of Creel to restore the Minuteman lead. UConn tried to counter, but could not answer. UMass defeated UConn 3-2 after a dramatic final two minutes.

UMass Coach Greg Carvel was elated after the win.

“That’s a big win for my team. We came in here knowing this was gonna be a playoff style game. All the goals were ugly goals. We ended up getting one more bounce than they did. Now we can take care of business on Saturday for a home playoff series.”

With the win, the Minutemen improve to 14-17-2 overall and 8-13-2 in Hockey East. UMass jumps Vermont into 8th place in the standings. They close their regular season on Saturday at home against Providence with a chance for a home playoff series on the line. Puck drops at 7 pm at the Mullins Center.

With their seven-game win streak snapped, UConn Coach Mike Cavanaugh was disappointed about the game.

“Certainly a disappointing game. But it’s a good reminder to our team that if you don’t play a full 60 minutes, it’s up in the air whether you’re gonna win the hockey game. I think it’s a good lesson going into playoffs for us. I don’t think we played particularly bad, but we can’t give up a goal on the next shift after we tie the game.”

The Huskies close the most successful season in Hockey East to date with a loss. Their record at the end of the year is 15-17-2 overall, and 11-12-1 in Hockey East. The defeat secures a first-round bye for Boston University. UConn still has a chance for a playoff bye depending on BU’s and Maine’s performances this weekend. If all else fails, they will finish no lower than seventh, guaranteeing their first home playoff series since joining Hockey East.