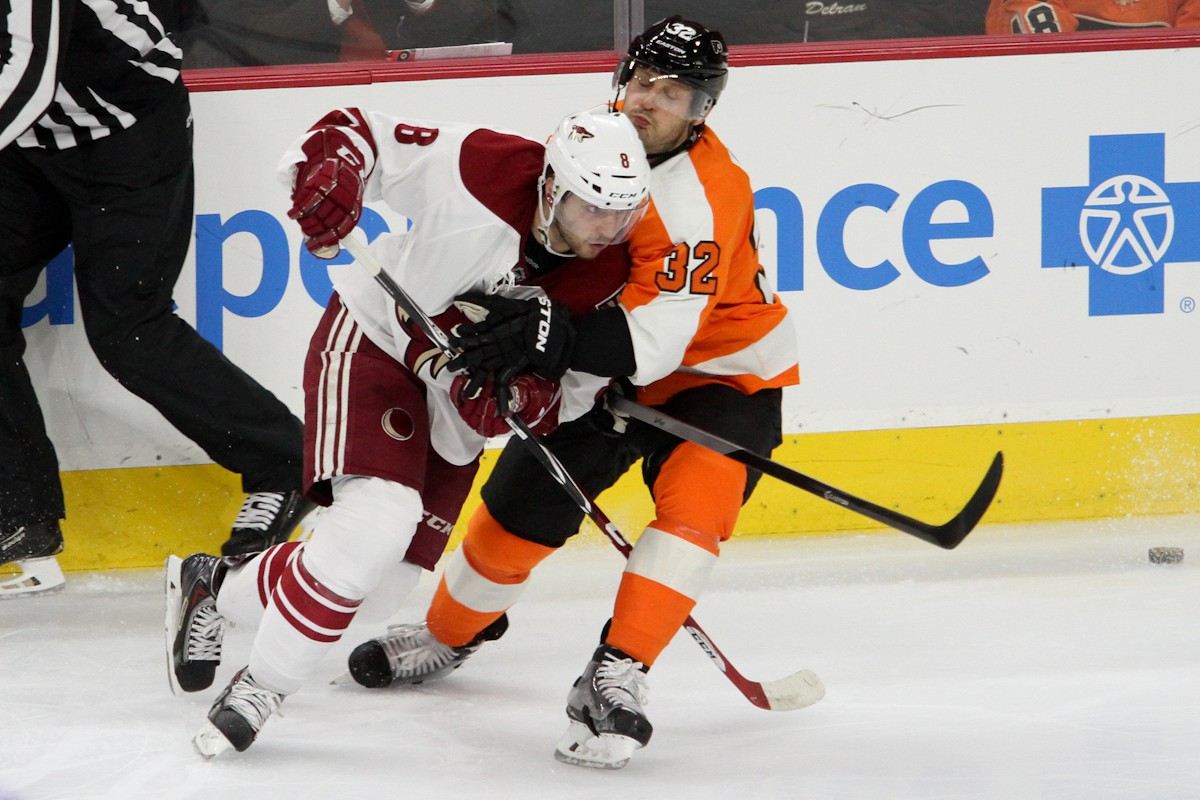 Two Points In The Rarest Of Feats

When you look at how the Arizona Coyotes have won their games this season, it has been through sheer dominance. In five of their six wins prior to coming to Anaheim they had leads of two or more goals. The lone earned win came early in the season against Pittsburgh. Since then, they have played some topsy-turvy hockey that finished each game with more questions than answers surrounding how this team is going to face out this year.

In their second trip to Anaheim, playing from behind has never been their friend. Already down 2-0 with backup goalie Anders Lindback at goal, the Coyotes seemed like they were playing like it was a blast from the past. It was nearly a guarantee that with this team down two or more goals, they would walk out without a point. In fact, in just two of their wins last season did they ever come back from two goals down, the most recent happening in February 1 against Montreal.

It has been a long time since the Coyotes have been able to execute second period adjustments, especially with such a young roster. But one important motto that surrounds Dave Tippett and the rest of the Coyotes has seemed to turn out well: trust your teammates and they will do work for you.

“I really felt like we were fine,” Tippett said. “I always thought we were playing well even after the first period. Into the second we were playing much better. Our job was to keep hanging around the game and keep up in a fast paced game.”

“We were a confident group as it is,” Domi said. “We know what we are capable of and hold each other accountable. We did our job and Lindback held his ground to keep us afloat. We kind of lost our groove a little, but rallying together got us the win.”

After giving up two goals within a 90 second span early in the first, the Coyotes had to do just that. It took the second period to propel this team to sync, and the young ones answered with praise. Anthony Duclair started the rally with a very timely slap shot from about 20 feet away, something even Frederik Andersen had years to prepare for. Max Domi found the equalizer off a backhander from Dustin Jeffery that later sparked this team at will. Then it was Domi again going unassisted forcing Andersen away on a take from behind the next.

The Coyotes later gave up the game tying goal halfway through the third by Sam Vatanen, but there was no sense of panic. Arizona from before would let themselves down and instead of toughening up, they would come out on the ice sluggish and dejected. There was no sense of negativity. Instead, they played like they were holding on to the lead, watching their defense close the gaps and Lindback doing all that he can to keep the game close. Hard work eventually pays off with Mikkel Boedker stealing a misdirected setup from Ryan Getzlaf from center ice, eventually going coast to coast to give Arizona a much needed, hard earned two points.

“We knew that they were going to come out hard,” Duclair said. “We had a feeling they would come out pretty upset after the last time they played us. It just shows the character in this locker room.”

The team was a little out of place after a long five-game road trip to the East Coast where they only picked up five out of a possible ten points. Jet lag still lingered around when they returned home and lost two of three, with a brutal loss to the New York Rangers that forced Mike Smith to the bench and gave Lindback a chance and actually salvaged a bad deficit. Against the Ducks in their two games they have taken control on all cylinders. On 73 shots Anaheim has only found the net three times and are also 1-for-7 on the power play, including escaping a 5-on-3 late in the third period last night. Domi and Duclair also have a combined seven of the team’s eight goals in two games against the Ducks, both of which have been on the road. Arguably the Coyotes feel right at home, but superstition seems to be out the window with some big success in Southern California.

“The little ones seem to like this building,” Tippett said. “Both of them played very well tonight. As a team to play superb on the power play was much needed.”

However you want to look at this, there are certain games that can bring up the morale of a team. For the Arizona Coyotes, they would hope to make this the calling, and to do it against division foes makes things even sweeter. A quick turnaround against the Los Angeles Kings, whom they also beat in their season opener, is next on their schedule. A hard fought win is one thing, but now with a chance to go 2-0 in the SoCal road trip can at the very least give this team a little hope that this could be a turnaround year.

“It’s good when you hang around a game,” Tippett said. “Even when you give up the lead and have the ability to stay with it is the idea of how well we can play as a team. I thought we did enough things to deserve a win.”