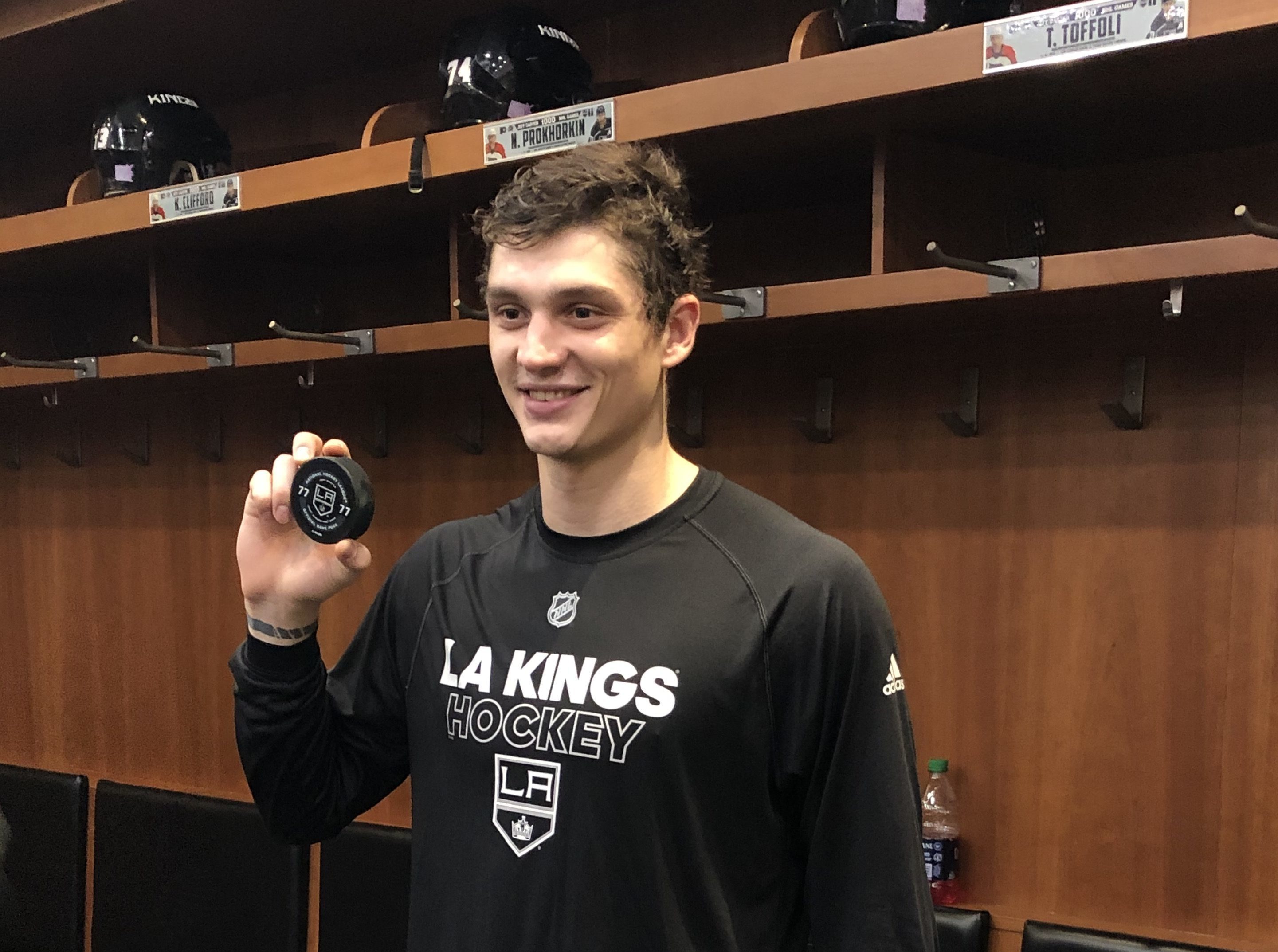 Kyle Clifford in a cowboy hat. That’s what greeted fans on the LA Kings website Saturday, along with the announcement that it was “country Music Day.” Anything to sell tickets, I guess, but to whom?

Honestly, I don’t even know if there is a country music station in LA. I know there used to be, but the one I knew changed formats a long time ago. I have no idea if it has been replaced. I still don’t, or at least, they didn’t advertise the call numbers if it has.

Anyway, through the first period, aside from the Ice Crew being dressed in cowboy getup, the only country-themed moment I caught was a song that asked something like, “What do you get when you play a country song backwards?” with an answer something like, “You get your dog back. Your truck isn’t blown up.” And other similar things.

But I’m in way too deep on this theme, and you’re reading this to find out about hockey, so here goes. Vegas was in town. I suppose the old gun-slinging West is apropos of them. And the Kings came in on a streak, if a pair of wins qualifies as that. Both of them came at the steady hand of Jonathan Quick in net, 3-1 in regulation and 3-2 in OT, although against weak teams—respectively Minnesota and Detroit.

It was also Jeff Carter’s 1000thgame, precisely half of which have been played with this club. Doesn’t seem that long ago that he came here, but he’s won two Cups, had a significant injury and recovered from it, and recorded a career 712 points on 370 goals. Make that 371 and 713. But wait for that.

Here’s a wee preview: talking about his 1000thafter, he said, “A lot of ups and downs. It’s kinda hard to sit back and think about it leading up to it, but in the next week or so, we’ve got a couple of days off, I’ll think back a little bit. It’s been a lot of hockey, a lot of fun, and I feel good.” No doubt they’ll present him a silver stick next week.

And you’re also wondering this, so let’s get it out: no, Kovalchuk did not play. Yes, he is tied for fourth in team scoring, albeit with a paltry nine points. That would probably be ten had he not sat the last two games, lodging him at tied for third coming in with Dustin Brown, and trailing only Doughty and Kopitar. No, this does not make any sense. Why embarrass the player for your mistake of signing him?

The Golden Knights came in also sub-.500, with a 9-8-3 record. They are slightly better on the road than at home, but still fourth amongst the wildcard seekers as the day began. They had lost three straight games.

As the game ended, they had lost four, but there was still more hockey to be played elsewhere in the league, since this was a 1pm LA start, so their place in the West was not determined. Nashville had yet to hit the ice.

But the game. The Kings did everything right in the first period. The only failing was that at one point, the shots were 13-4 in favor of Vegas, but the score of the period ended 2-0 LA with the shots 14-8 for Vegas.

And this included both a shorthanded goal, by Blake Lizotte, and a power play goal, by Drew Doughty. The team, as the game began, was 29thin the league on the PP and were killing at a rate the put them 29th in the league. They had scored just one shortie coming in, by Kopitar.

The second goal, Doughty’s, was slightly in the bad category. Sure, it was with the extra man, but the puck came to Doughty up high of the left dot. He one-timed it, but it went in only after glancing off the catching glove of Malcolm Subban.

Quick was good in net, though I noticed more movement than he typically makes. He tracks the puck well, but kind of over-tracked it, if you will, moving nervously side to side, on this day. Is he over-compensating for his 3.80 GAA coming in? Trying to improve on his .876 save percentage? He has played 13 games thus far this year, coming in with a 4-8 record. Jack Campbell has played in seven, with a 3-3-1 record. His save percentage is only slightly better, though, at .886, so maybe it’s more who’s in front of them that these two themselves.

Here’s just a simple example  on Quick. In period two, the puck went off the end boards to Quick’s left. He sprawled for it, over-reacting, and had to reach a leg back while spread-eagled to stop a shot that was coming towards a largely open net from a crashing Vegas player.

The shots at the end of two, by the way, were 25-15 in Vegas’s favor. The low shot total for LA is a bit of a reversal, since the LA team came into the day with the league lead in shots taken, at 35.4, but there’s also the quality shots stat. And eyeballing this game, it was clear that the Kings were fronting the net better than prior. Particular in this effort was Carter, who was playing “big.” For instance, in the late going of P1, he stole a puck, dished it off, and then went right to the front of the net to create havoc.

The test of the Kings’ mettle came in period two, when they got kind of ripped off on a goal. The puck came to the net from Reilly Smith, and at the time, Sean Walker was pushing Max Pacioretty into the crease. Goalie interference? Not exactly. But as the puck came through, Pacioretty appeared to redirect it into the net with his skate blade. A brief review followed, and the goal was called good. How would LA respond?

They went straight down the ice and put a dangerous chance on Subban. The shots at this point were 20-10 for Vegas. Kings got the puck to the crease once more, and Clifford went for it. Nikolai Prokhorkin followed up, netting his first NHL tally. He came in from the dot after having taken the initial shot. Clifford had an assist for his handle of the puck. This was Prokhorkin’s first NHL goal. He was a fourth-round draftee of LA in 2012 and played at a point-per-game pace in St. Petersburg of the KHL last season. In fact, he has over 300 games of KHL experience, since 2010-11, and 92 goals in that league.

He doesn’t speak much English, but he commented on his goal after the game: “I’m so happy. It’s my first goal in the NHL. What a day.” He said that he would put the puck in his trophy room in his apartment in Russia. “I have in Russia a museum. No, a trophy room,” he corrected when asked about the fate of the puck.

He further described the goal: “Clifford dropped it to me, and I just shoot. It’s too easy!”

But that wasn’t it for the second frame. Quick stopped a funny floater from the outside that bounced and hit him in the chest. The Kings cleared, albeit weakly, and Jonathan Marchessault took the puck back into the zone. It went to the right wall and out to the point for a one-timer by Marchessault. On the first look from up in the press box, it appeared that the goalie had to look through four guys—two of his own and two of the Knights, and couldn’t see the puck, which eluded him on his left side.

A replay seemed to show that he had plenty of vision to the right side, as the players screening were moving out of his field of vision, towards his right. The puck just got by Quick and went into a fairly big gap of net that he left to his left. Hmmmm. So it was 3-2.

Vegas wasn’t finished yet, or to put that another way, the Kings weren’t done collapsing. They seemed to be standing around, and in fact, they were. So Vegas did what they always tell you to do—they put pucks to the net. One was a high wrister that went up over Quick’s outstretched hand and hit the glass behind him. It came off and bounced down, where Sean Walker seemed to have it, then muff it. It went to Pacioretty, who put it to William Karlsson right in front. He buried it past the goalie to the long side from in close. This came at 17:06 of the second, and the Kings seemed nervous for the rest of the frame despite one push.

So as the second period ended, the Kings and Vegas were knotted at three, a two-goal lead was blown, a shorthanded goal and power play goal squandered, and two teams went to the rooms.

The speeches there would be obvious. Take one (Kings): You guys are collapsing back too much. You’re not moving your feet. Don’t waste this. Take two (Vegas): Keep at them. Come out hard in the third and get the lead. They’re vulnerable. They’re not believing right now.

A mini fairy tale. Jeff Carter, in that aforementioned 1000thgame, scored the winning goal with 12:42 gone in the third. It came off a faceoff where the puck went back to the right point. Matt Roy flung it toward the net, and Carter got a piece of it on the way in. He fell over his own fallen teammate as the puck sailed by Subban.

He was matter-of-fact about it after: “Nothing special about it, actually. Win a faceoff, shoot a puck, it’s kinda how the games go for us if we simplify.”

And he had begun the interview with a joke, because I asked him if this was a Hollywood ending: “You saying that it’s all over, or what?”

He carried on, “You said Hollywood fairytale ending. I thought you were talking about my  career!”

Coach McLellan later, unknowingly, validated my question. “I’m glad that he played a big role in it. You couldn’t write the script any better to get the winner. Proud night for him and his family. Kids watching dad go to work. Good thing it was an afternoon game.”

McLellan, obviously happy with the outcome, and what is now truly a streak of wins, at three, said, “The third period for us was probably our best period, right. It wasn’t flashy. It was a pretty simple period, but we didn’t give up much in our end, as we did early in the game. We found a way to score, and I thought we did a good job of shutting it down.” He said they are understanding the game better in pressure situations. “Things that we’ve been talking about since December 15thare starting to settle in. It’ll get away on us at some point, and we’ll have to fix it, but right now we’re grasping some of the concepts we’re trying to put in place.”

The Kings have the miniest of road trips now, going to Arizona and coming back after Monday.

You heard me on Ducks Calls Thursday and The Power Play on NHL radio Friday. Big week!