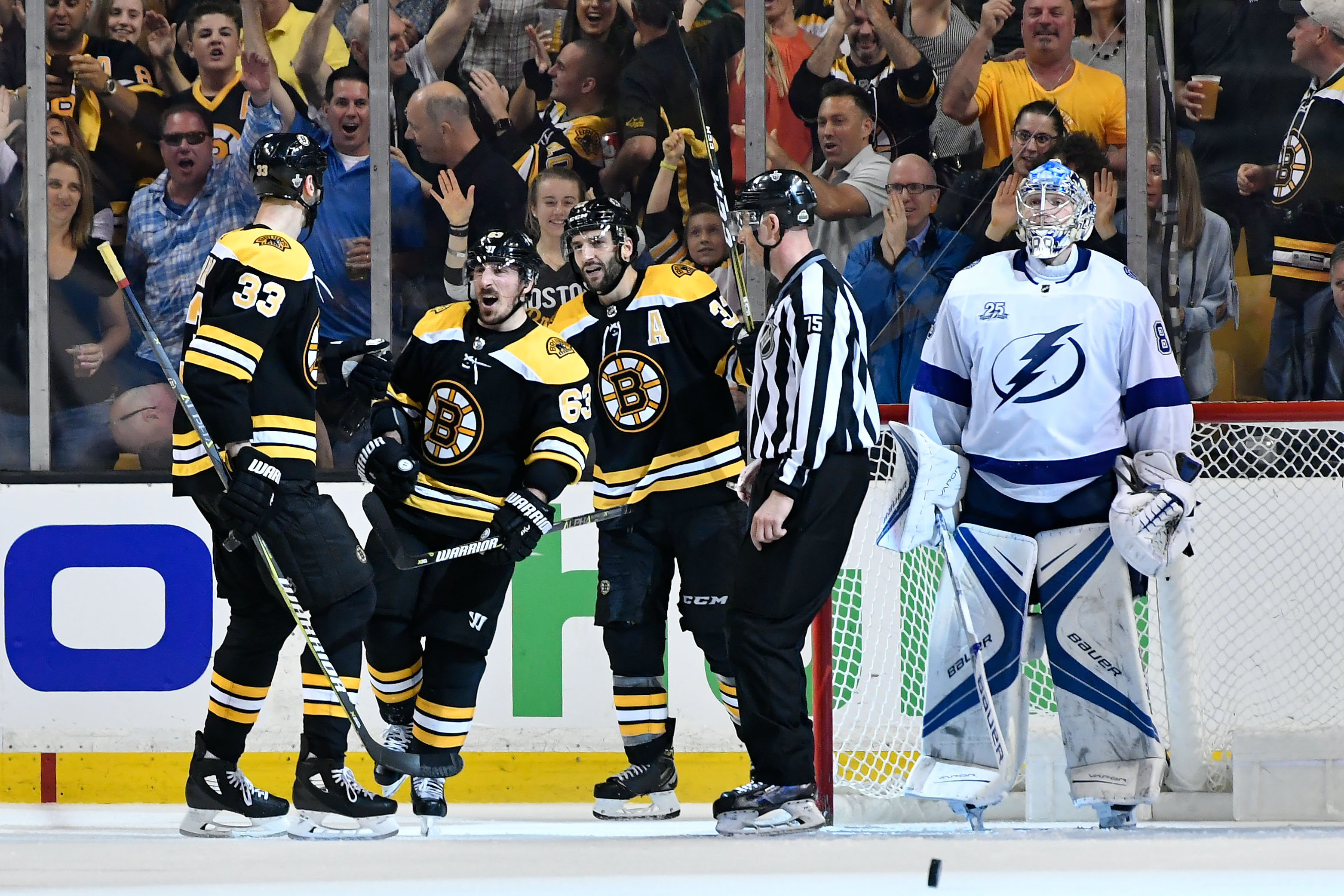 May 4, 2018; Boston, MA, USA; During a NHL game between the Tampa Bay Lightning and Boston Bruins.

Top Line Not Enough As Bruins Fall in Overtime

The Boston Bruins scored six times against the Tampa Bay Lightning in Game 1, and since that offensive explosion they have struggled to find the back of the net, only lighting the lamp a total of 3 times over their next two games. They lost both of those games.

The Bruins have relied too much on their top line of Brad Marchand, Patrice Bergeron, and David Pastrnak for offense. In 10 games Marchand has 15 points and Pastrnak has 19 points (tied for second in playoff points behind Pittsburgh’s Jake Guentzel who has 21). Bergeron, who missed Game 4 of the Toronto series, has 13 points in 9 games. This line has been lights out in their team’s victories but has been abysmal in their 5 postseason losses, posting an anemic 6 points and a combined -19 rating.

“He was on pucks, he shot the puck, so he obviously created offense for us…some energy, that’s a bit of it. I think the last two games, we need a little more of that,” Cassidy said pregame of what he expect to see from Donato. “We need some more pop in our lineup and a little more energy, enthusiasm and puck pursuit, and he can add that.”

Pastrnak became only the 8th player in NHL history to score at least 20 points in his team’s first 10 playoff games when he batted a Torey Krug rebound in past Lightning goaltender Andrei Vasilevskiy but the Bruins still found themselves trailing 2-1 after the first.

“Yeah, we were feeling good about ourselves. We were making plays,” said Marchand. “We had the momentum and we got the lead there, so yeah, it was a good second.”

Bergeron would score a shorthanded goal to give the Bruins in the lead but it wouldn’t last for long as Steven Stamkos would send the game to overtime with a one timer that was the result of a missed holding call on Tampa.

“Seem to be going down this road a lot lately in these things, about the non-calls,” Cassidy said in regards to the non-call before the Stamkos goal. “It looked like he reached around, pulled him down. Charlie’s a strong guy, but it wasn’t called, and it’s in our net, and that’s that. There was nothing you can do about it after; you’ve got to keep playing, and we did, but they made the first play in overtime.”

Lightning defenseman Dan Girardi scored 3:18 into overtime to lift the Lightning over the Bruins 4-3 and take a commanding 3-1 game lead in the best of 4 series.

“Yeah, I mean it’s never fun to lose, right?” Bergeron replied when asked how tough the loss was after coming back and losing in overtime. “Especially in overtime so obviously we’re disappointed with it, and we thought we were… we played a really good game tonight, and I thought we were in it. We had the lead, and… so yeah. So that’s that, and now we have to look forward.”

The Bruins will look to stave off elimination on Sunday when they play Game 5 in Tampa.