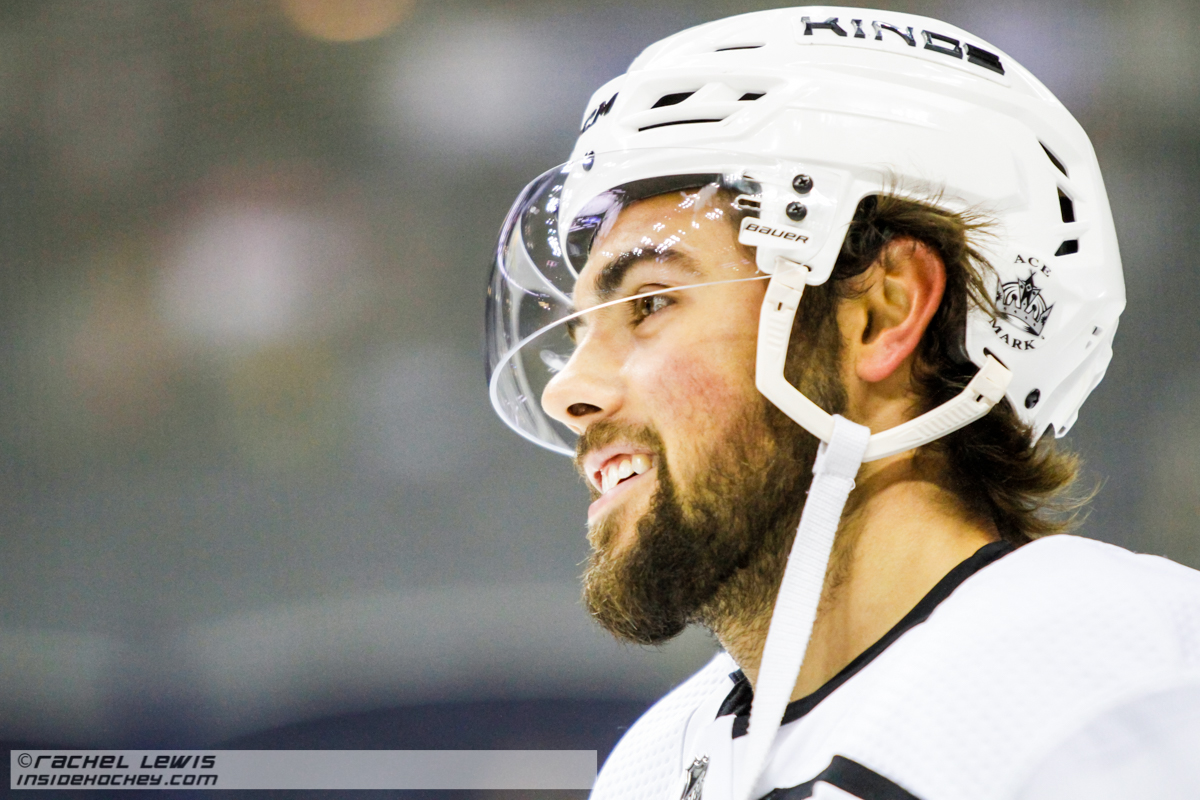 Monday  night the St. Louis Blues came to LA to play a  game that is like the others remaining in the season for the Kings, playing out the string. The teams battled, though not furiously, to a 2-1 score.

Nothing was doing for the first two periods, with neither team scoring and the shots an abysmally low 11 for St. Louis and nearly as bad 15 for the Kings. The Kings broke through in the third, but it was in response to an early  third-period goal by the  Blues’ Tyler Bozak. The even-up goal was Alex Iafallo’s, to make 13 for the year for him.

That tally was a one-timer from deep in the slot and to the left, a lovely shot into the far upper corner.

The Kings survived a late penalty for a trip to Austin Wagner to keep it at ones. The Blues’ power play featured a wild scramble near the end of the two minutes, although not resulting in a St. Louis goal. It was a moment of tension in an otherwise humdrum game. Cal Petersen was in net for the Kings.

The Blues took a penalty of their own with about two minutes to go in the contest, but Jordan Binnington was good in their net. On one threat, which was a shot down the slot that dropped to Iafallo of the Kings on the doorstep after a glove save, he covered. Another chance, albeit one that doesn’t get on the scoresheet, was Iafallo to Vilardi, clear on the right side, but Vilardi fired it wide. Not registered as a shot on goal.

A third one was off the post behind Binnington and down. He didn’t know where it was but heard it clank the pipe and got his glove behind him to sweep it out. Pretty exciting to end the game, and since nobody scored, and play was almost at 60 minutes when the PP ended, the Kings could at least say that they got a point in their final LA appearance.

And no more. The Blues got a dead-to-rights two-on-one with Perron and Faulk less than a minute into OT. Faulk totally fooled Petersen with a wrist shot. Petersen was on his left knee poised for a glove save with his right (catching) hand, and Faulk changed the angle of his shot and put it by him on the opposite side. It looked a bit like when a soccer goalie dives right and the ball goes left. A bit like that.

This was the fifth OT game in the last seven contests for the Blues. The shots ended up 27-19 in LA’s favor. The Blues now go home for two final games, versus Minnesota. Those games will do nothing to change their fate, as they have no hope of catching the third-place Wild to change their playoff seeding.

This was the home finale for Los Angeles. They play two more games, both away in Colorado, Wednesday and Thursday.

After the game, Captain Anze Kopitar thanked the fans assembled and watching at home, saying that “hopefully in the next few years, our record is going to show a little better, so this place is going to be bumping  a little bit more.” Previously, the team had done a sticks-up tribute to the small crowd allowed under Covid rules.

Gabe Vilardi also commented on the crowd’s presence: “It’s very nice, for sure. I don’t know how many there is, whether there’s a thousand, two thousand, whatever it is, but even with that we can hear them. We can hear some of the chants, and it feels good. I don’t want to say normal because nothing’s normal yet, but it’s starting to feel more normal I guess.”

Coach McLellan was also happy about the crowd, but most of his words were analytical as he assessed the game, and his team. “We were for the most part responsible, broke the puck out of our end quite well tonight, which was a good thing.” He said there weren’t a lot of defensive mistakes.

“Offensively, for a team that really has to work hard to score, I thought we got cute. We wanted to make plays when we should have been shooting the puck, and it probably cost us the game. When we play direct, when we play north-south . . . we have a better chance of winning.

McLellan did a little roster analysis as well: “We have to sit down and evaluate the players we have here. I know they’re not all going to be back. We’ve got to go out and recruit and find some other players that can help  us. I think we have a lot of work to do still.”

He continued to say that the team needs to get its veterans, Brown and Quick, back to health, and that “our younger players that have been in the league now for a year or two must show improvement. They have to carry more of the load, offensively, defensively, game management. It’s a must that they graduate and move on to the next level, break through, and that’ll be a big challenge for us as a team.”

He finished on the young players: “We need it from them, and  they’ll be directed that way heading into the summer.”

Brian Kennedy is a credentialed NHL Media member and a member of the Professional Hockey Writers Association. He’s had the second Pfizer shot, but alas, too late to get to a game in person.