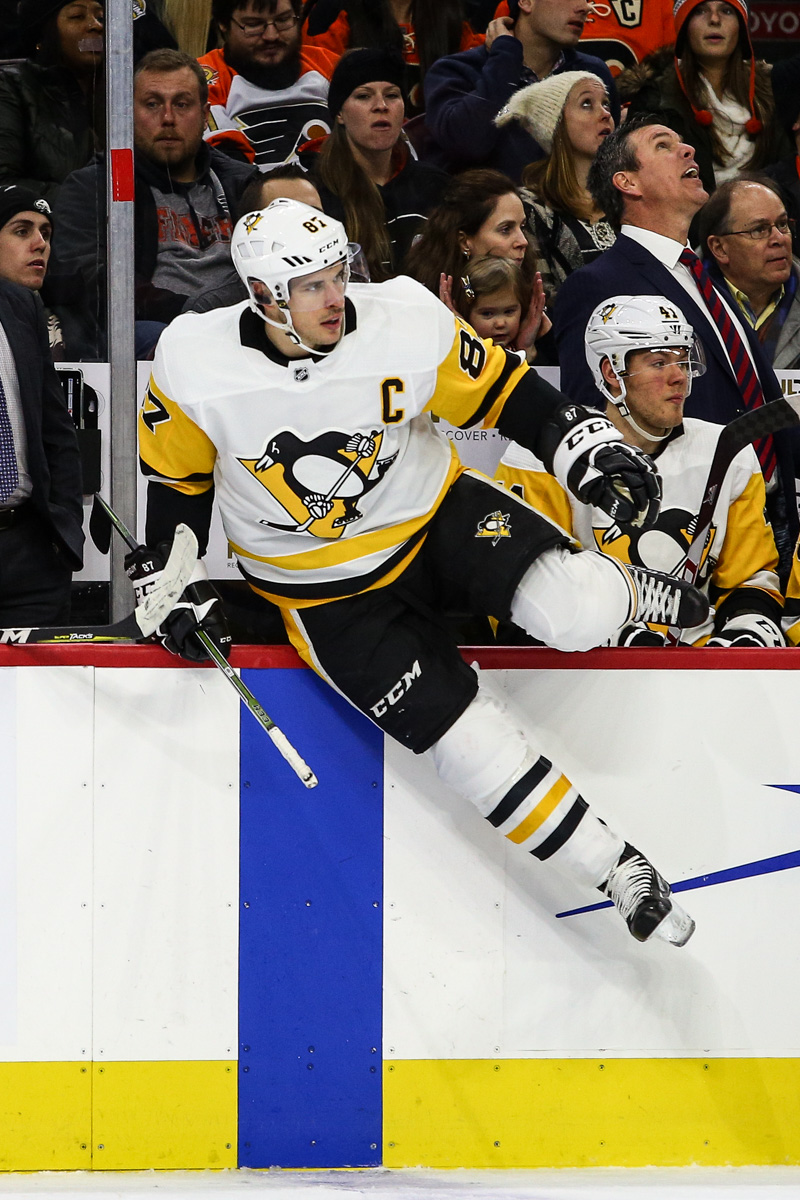 This IS What They Were Thinking

Three or fewer. That’s how many penalties Randy Carlyle of the Ducks has as his goal for the team. They exceeded that by a factor of two, taking six for twelve minutes of disadvantage, against Colorado on Monday. The Avs scored one power play goal in the game.

Carlyle’s strategy for controlling the times his team is in the box isn’t to “be good,” though. Rather, it’s to focus on the offense. As he said, “If you play a lot of the game in the offensive zone, usually the opposition is going to have to commit some sort of foul to restrain you or stop you.”

Would that be true against an offensive team like the Pittsburgh Penguins? The Pens came in to Anaheim Wednesday night having scored 135 goals and with a power play that was on fire, leading the league at 26.5% and totaling 43 goals. What’s more, they were even better on the road (28.2%) than at home, where they ranked sixth in the league.

Thus any amount of undisciplined play would be sure to be paid back with goals against. And the Ducks, despite their open style, aren’t scoring. As a team, they had 122 goals-for entering the night. That’s fewer than anyone in the Central Division and better only than Vancouver and Arizona in the Pacific, where they play. So should they allow an early Pens goal or three, they would be in for a long night.

What’s keeping the Ducks alive, barely, is their goaltending. Even at that, they had allowed 125 goals, which put them tied for fourth in the Pacific and tied for seventh in the West’s wildcard race in terms of goals-against.

So Pittsburgh, coming off of a four-game win streak and having won five of six, looked to whack the quack. But as they say, that’s why the games are played. So what happened?

The difference in period one, a one-goal advantage for Pittsburgh, didn’t come on the power play. Surprising, because the Ducks gave the Pens a chance. Rather, the difference was the result of a sloppy play behind the Anaheim net. Bieksa messed around with the puck and finally threw it to Fowler, catching him off-guard.

Fowler gave it away, and it ended up with Malkin. He spun around at the right dot and put a low surprise wrister past John Gibson.

The Ducks earlier had survived a power play by the Pens, quite ably. They kept up the pressure and disrupted. Fowler ended up with the puck in the Penguins’ slot and got off a high slapshot, forcing a glove save by Tristan Jarry. The Pens went back up ice and got off a quick shot. Then Crosby muffed a one-timer. The Pittsburgh PP ended up with the shots 12-8 for the Ducks. It had started with them up 10-7.

The Penguins had earlier had a penalty of their own. The Ducks made it seem about four minutes long. Getzlaf got off two slapshots. The second one was blocked. There was a lazy play to Perry at the point, broken up. Fowler took a slapshot, saved. He took another one, wide. He sent in a soft wrister into traffic. There was a jam. The puck squirted out wide.

Fowler and Perry played catch and Perry took a shot. There was a save and rebound in close. The PP ended with the Ducks having gained four shots on goal, and one more right after the end.

But as mentioned, any and all of this good work was negated by Bieksa playing defense like he was in Pee Wee and offering up the sacrifice of Fowler to Malkin. Was Pittsburgh’s win steak to continue?

The second period changed everything. Put it this way: If I had told you that the Ducks would score three unanswered goals before ten minutes had expired, you would have said I was crazy, right?

What about four in the period and none for the Penguins? Well, that’s indeed what happened.

The first came after the Ducks had blown a power play. They kept the puck and were playing catch with it around the zone. It came across the blueline to Beauchemin. He took a slapshot with Getzlaf and Rakell in the way. Rakell redirected it down and it bounced off the ice and in. About four minutes had passed in the frame.

Goal two was a wraparound play with Pittsburgh absolutely asleep. Ondrej Kase and Adam Henrique played with the puck behind the net and Henrique took it out the goalie’s left side and put it in. Only the goalie wasn’t there. He was still hugging the right post. This was a minute and a half later the first goal. Henrique would later say of his line, “Our chemistry has been building. That’s what happens with almost everybody back; we can play with the same guys and see that chemistry building.”

Number three—a spectacular breakaway by Chris Wagner who went in on the left side after a chip pass from Silfverberg. Wagner and Silfverberg playing together? It was on the PK. Wagner scored shorthanded with just shy of ten minutes gone. His thinking: “Take a deep breath, and try to make an actual move instead of just firing one ten feet wide.”

And the final one came nine minutes later (18:28) when Kase took a puck off the boards at his own blueline and sped down the ice. He deked right to left as he sped across the crease and flipped a backhand into the open net. Nobody on the Penguins side was anywhere close.

Sidney Crosby said afterwards, “We made too many mistakes in the second period. To give up that many goals, and that many breakaways in a short period of time, you’re putting yourselves in a tough spot. . . . We didn’t help ourselves with the [play] like that.”

He would summarize by saying, “It’s one of those things that when you put yourself in that spot, it’s hard to come back.” This after reciting some of the good things his teammates had done in the third period.

In fact, all but the first goal might be described as coming when the Penguins were loafing. Why? They last play in their home building on Sunday. So sure, they’ve traveled coast to coast, but they’ve had two days to get over it. They practiced in Anaheim Tuesday. They have their time zone adjustment done, in other words.

And if they think they’re tired now, what about tomorrow? They have to go up the road to LA. Not that that’s a bad trip, if they do it at the right time of day. (Don’t even ask what it would be at 8am.) But if there’s a team on the West Coast that plays a heavy game and will batter tired legs into submission very fast, it’s the Kings.

Period three, as Randy Carlyle would later say, allowed the Penguins hope. Here are the coach’s words: “It was disappointing that we took two penalties and they scored two goals to make it exciting. I guess the entertainment value of tonight’s game was up there.”

He had earlier said, “If you look at the start of the third period, we hit two posts. The game would have been over. . . and Vermette had a breakaway that almost went in.” In other words, the game wasn’t as close as it appeared to be.

Only it was. The Penguins fired 12 shots in the third period. They scored two goals, both on the power play. They buzzed and had the Ducks bamboozled. Carlyle mitigates it by saying, “We shot ourselves in the foot with two undisciplined penalties; those are undisciplined penalties; I don’t know any other way to describe it. Those are things that are unnecessary. We had a neat and tidy game going. They didn’t have anything going. We gave them life. We gave them an opportunity, and when you give teams opportunities, they’re going to find a way to make you pay. But we found a way to win the hockey game, and that’s the most important thing. We gutted it out in the end and found a way.”

But that’s not how it looked. It looked like the Penguins could have tied it. They had plenty of time, with the game 4-3 and almost six minutes to go.

Goalie John Gibson said, “They have talent, and we gave them some chances. It’s something we’ve got to work on. I wasn’t at my best in the third period either, but we fought back and we held on, and it was a good win.”

He added, “We were on our heels a little bit, but we did a good job at the end shutting them down.”

The Ducks’ last goal, into an empty net, came with no time on the clock. The replay showed .1 second, and they faced off with the clock showing .2 of a second.

The Ducks were short Andrew Cogliano for the second game of his two-game suspension. As they did versus Colorado, they had JT Brown slotted in to the third line with Silfverberg and Kesler.

Friday, the Ducks take on the Kings in a rematch of last Saturday’s game, which featured three fights in four seconds of playing time. One thing that might help—the Kings will be coming off a game with Pittsburgh referenced above as taking place tomorrow night.