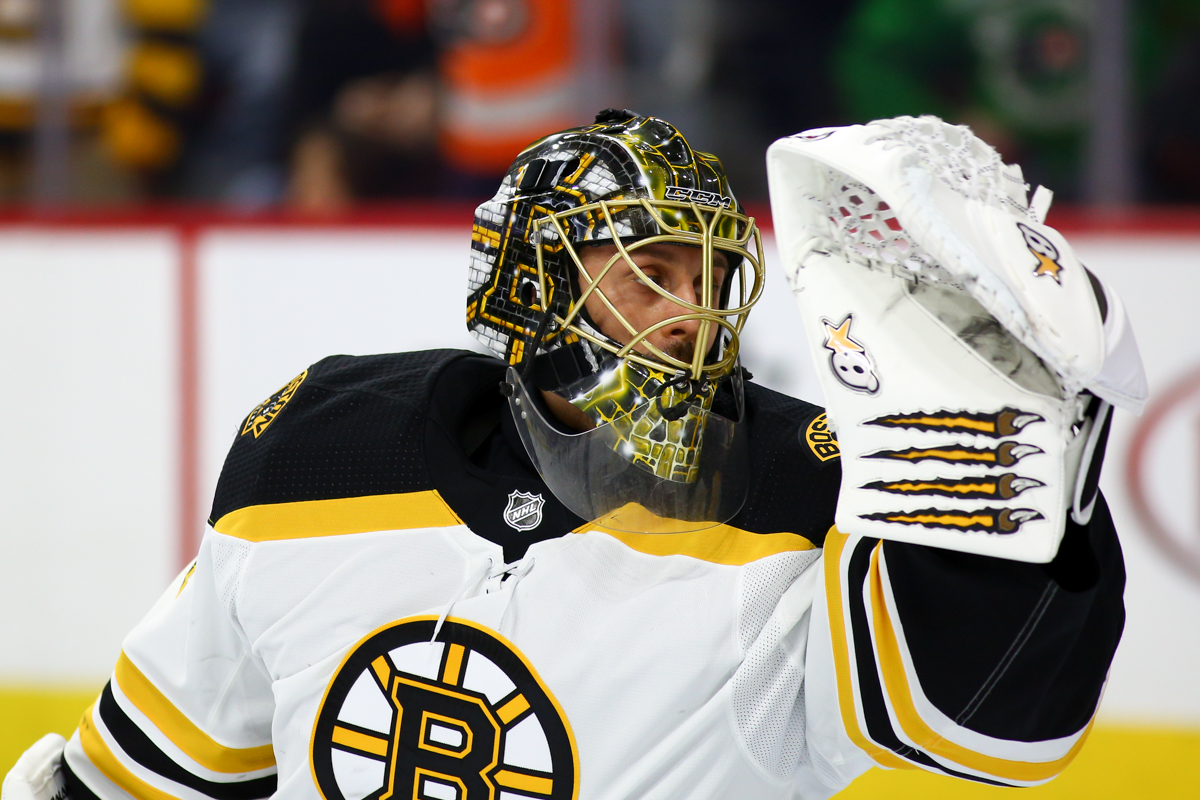 Boston doesn’t do warmups like most clubs. Two features stood out before their game against the Ducks Friday night: Brad Marchand, at one point, directed traffic as to who could shoot and when. At another point, the Bruins lined up on either side of the zone and passed pucks back and forth across the ice to each other. Meanwhile, at the other end, the Ducks were doing what most teams everywhere do—breaking in on the goalie, firing shots. This is not a criticism; it’s an observation: one of these squads looked distinctly more team-like than the other one did. Question was, would it translate into the game?

From the get-go, the Ducks must have felt a bit wary. They had their rookie goalie in net. Sure, he was coming off a shutout in which he looked good. Swallowed every puck. But he’s played a game and two-thirds, and not against a team as strong as Boston. Backing him up was barely-ready Ryan Miller, who said in the press this week that his knee is not fully recovered from the sprain that has kept him out of the lineup since before Christmas.

The Ducks also were forty goals behind the Bruins in-season production. And they had allowed 34 more than had Boston. Figure that as a 74-goal difference, and you can see the uphill struggle. They were also way, way behind in PP: the Ducks came into the game in 29th, with a 14.6 percent efficiency number. The Bruins were second, at 26.8 percent. That alone even had it not put them behind only Tampa Bay, would be amazing. The goal is usually to hit or beat 20 percent.

About the only place the two teams were similar statistically was in penalty kill, where the Bruins were 15that 80.4 percent (80 percent is the normal target) and the Ducks were 18that 80.1 percent.

It didn’t matter in the first period, as nobody was called for any infractions. The Bruins, meanwhile, stormed out and took over the early part of the game. Their closest chance (before they actually scored) was a puck that hit Kevin Boyle and bounced up and down, then rolled just past the post on the goalie’s left.

The Bruins beat the Ducks to every puck in their own end, and they scored at 5:31 when Sean Kuraly put a puck over to Brandon Carlo at the blueline. He slapped it, and it went past the far post, with the goalie fading away from that side. The netminder went too far, leaving the cage to his left open, and that’s where the puck found a hole. His fault? The presence of Noel Acciari waving his stick in front of the net actually created the deflection that beat Boyle, so no, don’t blame him.

The Ducks did the right thing after the goal—they stormed out and held onto the puck. They got into the offensive zone and created chances. Most of those were kind of messy—the crash-the-net type where, for example, Rakell, Fowler, and Perry found themselves in a scrum right in from of goalie Jaroslav Halak. That didn’t yield when a backhand was answered by a leg save.

Sprong and Henrique got in front next, for a redirect, close into the net. Save.

The Bruins’ only other good chance in the frame was a deflection that hit Boyle and stayed out. Then the Ducks took back over. Getzlaf passed to Troy Terry, but too close to the net for him to get a handle on the puck. Max Jones flew down the left side and took the puck the crease. He left it there. Nobody arrived to capitalize.

Silfverberg took the puck to the net from behind. No luck. A point shot was tipped by Derek Grant in front of the net. Still nothing.

The second period saw the Ducks take two penalties and get two power plays of their own but still not score. It was to the point near the end where you said, “This game owes them one.” Or maybe that was I who said that. Anyway, the game owed them a goal.

The only person to score was DeBrusk of Boston, on a power play. The puck came to Krejci off the faceoff and he held it on the left side of the crease. Boyle came out, and out, and dove out further, and Krejci just deked him out and put the puck to the crease, where it was swept into the empty net. Oops, rookie. But that’s OK because the Ducks kept at it.

The nicest play of the period was Rakell putting a pass to Corey Perry on a behind the back, spinning, falling move. Perry held it too long, finally took a wrist shot, and saw it hit the blocker.

The Ducks started to move their feet when they had the puck, which is what produced further offense. So much of their strategy is to rim the puck around the boards, or make passes and then stop and watch. Later in the frame, they began to do a little more perpetual motion-type work. For instance, there was a flurry with about two minutes left where Perry fired off a couple of shots including a wrister. Then Montour got away a couple consecutively.

Boston ended the period recovering a turnover with 35 seconds left and forcing Boyle to make an arm save on Kuraly. Chris Wagner, the former Duck, was there also but Manson of the Ducks’ defense batted the puck away.

The period ended 2-0, with the shots in the period 11-9 for Anaheim and 22-17 overall for the Ducks. They were in the game, against a team that by all righhts is far better than they are.

Period three was again an evenly played period. The shots were 12-8 for Boston, including one that went into an empty net with Boyle on the bench, where he was from about the two-minutes-to-go mark.

The better chances again went to Anaheim. Most visible: Troy Terry, who passed one to Montour sneaking low, and later put a shot to the net with Devin Shore and Terry in front. Both times, Halak made saves. He would eventually be named the first star of the night. Carlo was the second star, and the Ducks got one, the third star, awarded to Max Jones.

Jones talked to a small group of us after the game. “I’m creating a lot of chances for myself. Feeding off the momentum of other guys. Silfverberg’s been playing really well, so I look up to him right now. He’s getting a lot of chances, and he’s creating a lot for other guys, so I just try to look up to that, try to do what he’s doing right now.” He has played in six NHL games thus far, with no points. He said he probably should have scored a couple, but that he’s been gripping the stick a little too tight.

He also said that he and Troy Terry have “a lot of good chemistry. We’ve played together for almost the whole year [in San Diego]. I think we’re fast players. We like to feed off each other, and I think just by us skating fast, it helped out. It covered a lot of mistakes. If you’re skating fast, the puck’s moving with you; you keep it away from the other team. We’re used to each other. I think that’s the biggest part.”

All of this was proved by watching the game. Jones and Terry are on the fourth and second line respectively, but they got power play time together, and when they were both on the ice, things happened.

The Ducks are close to being a team that can win, in other words, but they just can’t get past the hump to put the puck in the net.

I asked Josh Manson about that after the game, noting that the Ducks were all around the net and should have scored. “I agree. I thought we had a lot of chances at the net, but obviously, nothing went in. I don’t know if we, puck luck or a little bit harder, or finish the chances; I don’t know what it is, but we’re headed in the right direction. We’re getting pucks toward the net and generating chances.”

He also said they’re playing a more structured game, and being in the right spots allows them to win more battles. “We know what we have to do. We have to score.”

Their GM/coach knows it, too. Here’s what he said after the game: “I think we had our chances. I think it was a very even hockey game, and they just buried their chances and we didn’t bury ours. I thought the team played very well. They stuck with the system, so we didn’t give up a lot, which was good. We just gotta create something around their net. We gotta do more around their net so the goalie doesn’t see the puck.”

He also commented, “Our power play has to . . . work harder to get the puck back, after we get a chance. We’re just one and out, and that’s not good enough.”

He said he was very happy with the defensive play of his team.

And then came the moment. You know, that awkward, “I’m done so stop asking me these questions” thing that coaches sometimes do. He was asked what the biggest surprise was, and he chuckled and said, “The biggest surprise? How fast the game is. That’s all I know so far.”

Then some positives about how the team is pushing and more about getting inside. “We’ve got to find some way to do that and figure out how to do it.”

Then the bomb: “What are you looking at with the trade deadline approaching?”

Murray put his head down, looked away, and said, “Ah, next question.” The press minder said, “Anything else about the game?” and Murray echoed something like, “All about the hockey game.”

Nothing further, your honor. And that was that.

So add that up: The game’s too fast. I don’t know how to tell these guys to get inside; I just know they need to do it. And I’m not talking trades because you’ve got me here in my role as coach.”

This might or might not be an improvement from what they had before. But there’s no question about it—the Ducks are playing some good hockey. They just can’t finish.

Scratches included Nick Ritchie. Murray could take a page out of the Kings’ playbook and scratch a couple of vets, as happened to Jeff Carter and Dion Phaneuf up the road in LA on Thursday night.

The Anaheim retires the sweater #27 of Scott Niedermayer on Sunday in a ceremony that starts at 4pm.