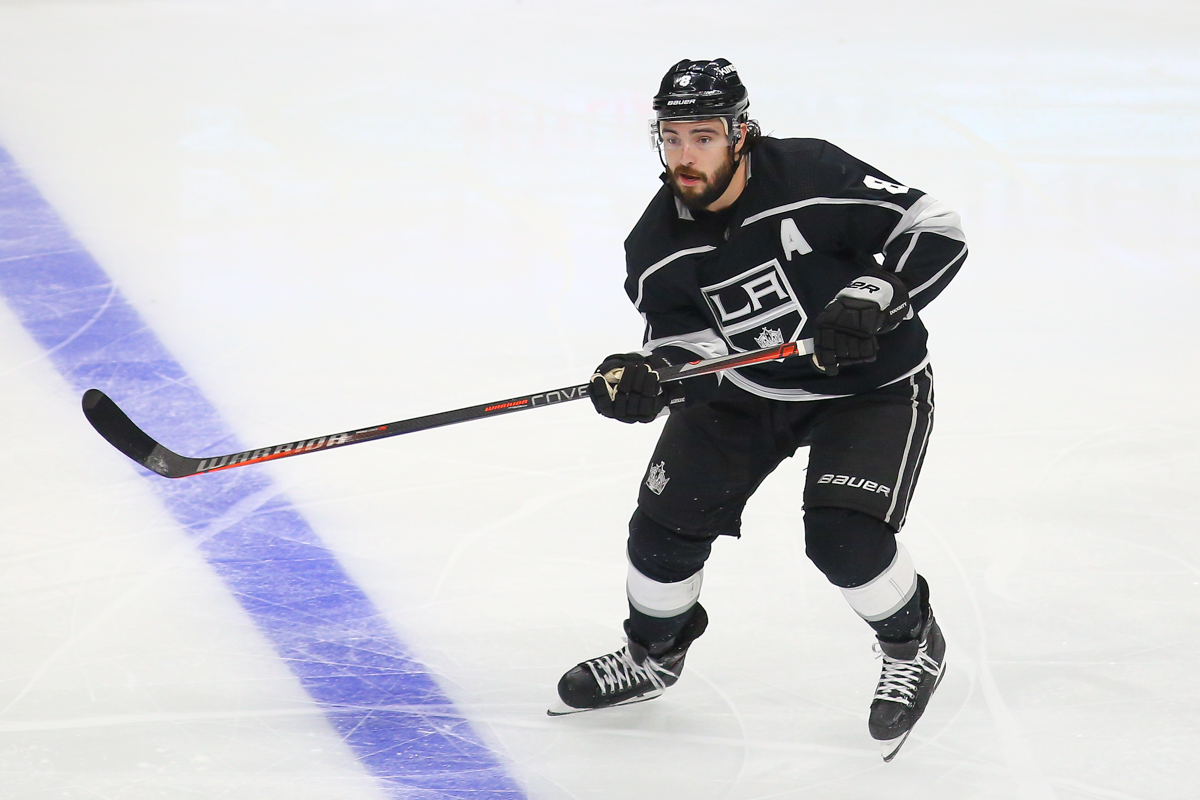 The LA Kings play the Arizona Coyotes five of their last 20 games, a string that started Monday night in Los Angeles. This is not insignificant when the Arizona team is holding down the fourth spot in the West, the final playoff spot.

Now, to be fair, the Kings aren’t exactly knocking on that door. They started the night in seventh place in the Division, with  34 points, and there was no way that they would be anywhere but  that spot at the end, because the team in front of them. St. Louis, had 38. And just in case you’re thinking  I have a brain cramp, that’s actually true: St. Louis is in sixth  place in the West. They  didn’t help  their cause with a 6-1 loss.

But what the Kings had to think about was simple:  win, and you’re just five points back of the playoffs, with one game in hand on the Coyotes. That means three points were the  real difference.

Only by the end, it wasn’t three, it was nine, because the Kings didn’t win. They  tried, after an early  disastrous 3-0  deficit, but they  never got all that close, though they  skated with the Coyotes most of the evening.

Along the way, some interesting stuff happened. Let’s start with a hat trick for Michael Bunting. The third goal by this player, the fourth  of the game for the  Coyotes, came on a  controversial play. It was reviewed, as it looked that he was offside, not when the goal was scored, but on the initial zone entry. He was chasing back to the  blueline on a delayed offside while a teammate was bring the puck over the line. The review, based on the Kings’ challenge, was lost, giving the Coyotes a 4-1 lead and the Kings yet another penalty, their sixth. The AZ team had scored three on the PP already.

Arizona came in off an OT win versus the Ducks Sunday night. They had won six of their last eight games. The Kings entered having lost a 3-2 groaner against San Jose Saturday evening, on a goal with less than five minutes remaining.  They were 2-1-0 against the Coyotes to date this year, now 2-2-0.

The game was more exciting that its eventual 5-2 score might indicate (and the last goal was empty net, so in fact it was also closer). The Kings, having been chastened by giving up three goals in the first 7:28, then  turned it up and saw Drew Doughty  get them to 3-1 down near the end of the first. That was a PP goal, and it interrupted a 0-22 string with the extra player.

In the second, the only goal was the aforementioned tally by Bunting. The third began with an Andres Athanasiou goal for the Kings at just past the two-minute point. It was a hard play on the wall by  Blake Lizotte, a pass to a pinching Kale Clague, the defenseman, and a redirect by Athanasiou on his backhand as Clague put the puck across.

There were other chances that could have reversed the course. Trevor Moore put a puck off the far post on a rush in period two. Same period: goalie Petersen put a puck up to Wagner at the far blueline, sending him in two-on-none. Wagner zinged one that was saved.

In period three, a scrum involving Lizotte, Carter, and a bunch of Coyotes ended with Carter grabbing a puck at the left of the net. He waited for goal Adin Hill to drop, saw him lose his stick, and then with incredulity watched as the enormous goalie got an arm up to make a save with his catching glove.

So there were chances to get within one, and that’s not all of them. Get this: Moore put a puck out to Grundstrom, who slammed a redirect. Save. Moore put a puck to Doughty, who had just split between the D-men. He got it on his backhand, and it might have been going wide, but it was called a leg save nonetheless. Carter got a puck that had gone from Clague to Athanasiou (who should have shot). He was on the left side and he redirected a low one-timer—a defenseman slid down with a leg to stop it.

So here’s a way  to look at this game: despite that the Kings were always  losing it from goal one, and despite the fact that they were never within fewer than two goals, they always looked like the team in command. Like the better team. But  they  didn’t care, as we learned after the contest.

Asked about the lack of intensity, Drew Doughty was more than frank after the game.

“I think that’s what’s been lacking for the last five games. We haven’t had any intensity, anyone competing. I shouldn’t say that. We’ve had some guys competing every single game, and we’ve had others . . . play good games and take games off. I mean, we’re down 4-1 in the third period I’d sure hope we’re playing a little more desperate but it’s absolutely ridiculous that we didn’t play  more like that in the first or the second, or the last four games.”

After describing his effort, he said, “When you’re down by goals, you can take more risks, and be up in the play  the entire period. That’s what I’m trying to do, but we need more  guys doing that. You can’t just have one or two or three guys trying to make a difference in the game. We need everyone making a difference.”

He was asked if this game was a call to action, and he said, “It should have been a call to action five games ago. We put ourselves in a good spot, and the last two weeks or so, we’ve shot ourselves in the foot . . . . Honestly, I don’t even remember your question right now I’m so pissed off, and enough of us talking about playing good in the third period. We’re losing in the game, so we should be good. It’s about how we’re playing from the puck drop, and we’re not showing up for that.”

His answer: “Compete. Act like you’ve earned your spot in this lineup and run with it. Don’t sit around hoping you’re going to get more shifts. Take your chance and run with it.”  There was more, but you’ve got the spirit of it.

Coach McLellan was also in a snarly mood.  He commented first about the horrible start.  “By the time we were done playing seven minutes, we were down by three and had taken two penalties, so I think that gives you a  pretty  good indication that the intensity level for the white team was a whole like higher than for the black team.”

He then went on to label his reaction “Disappointment. Lack of preparedness and intensity early in the game when you  need it. You’re out of the game and then you  decide to play? That’s ass-backwards.”

When asked about the playoffs, and desperation, he said, “Is the desperation setting in now that we’re nine points back? Where the hell was the desperation nine minutes into the game? I don’t think that big-picture. Let’s face it—we don’t deserve to be in the playoffs if we don’t have the intensity to get to the playoffs. And it’s as simple as that.” He cited his veterans and their understanding of the difficulty of making the playoffs, and said, “We have a pipe dream of making the playoffs with the kind of commitment and intensity we brought to the rink tonight and maybe a couple of the other games over the last little bit. That should answer the playoff question.”

For Bunting, this made four games this year, and now four goals. His  NHL career spans fewer than 10, all with Arizona. He  was drafted by the  team with a fourth-round pick in 2014, #117 overall. He’s 25, from Scarborough. Like so many draftees, he had an amazing second year  of Junior (of two total) with the Soo Greyhounds. He scored 37-37-74 points in 57 games. As an NHLer, it’s now six points in nine games.

McLellan said that their new player, Brendan Lemieus, would absolutely play the  next game. That means someone’s going out. That could be Gabe Vilardi, who sat for nearly half the third period.

Brian Kennedy, PhD, writes about hockey as a member of the Professional Hockey Writers Association.