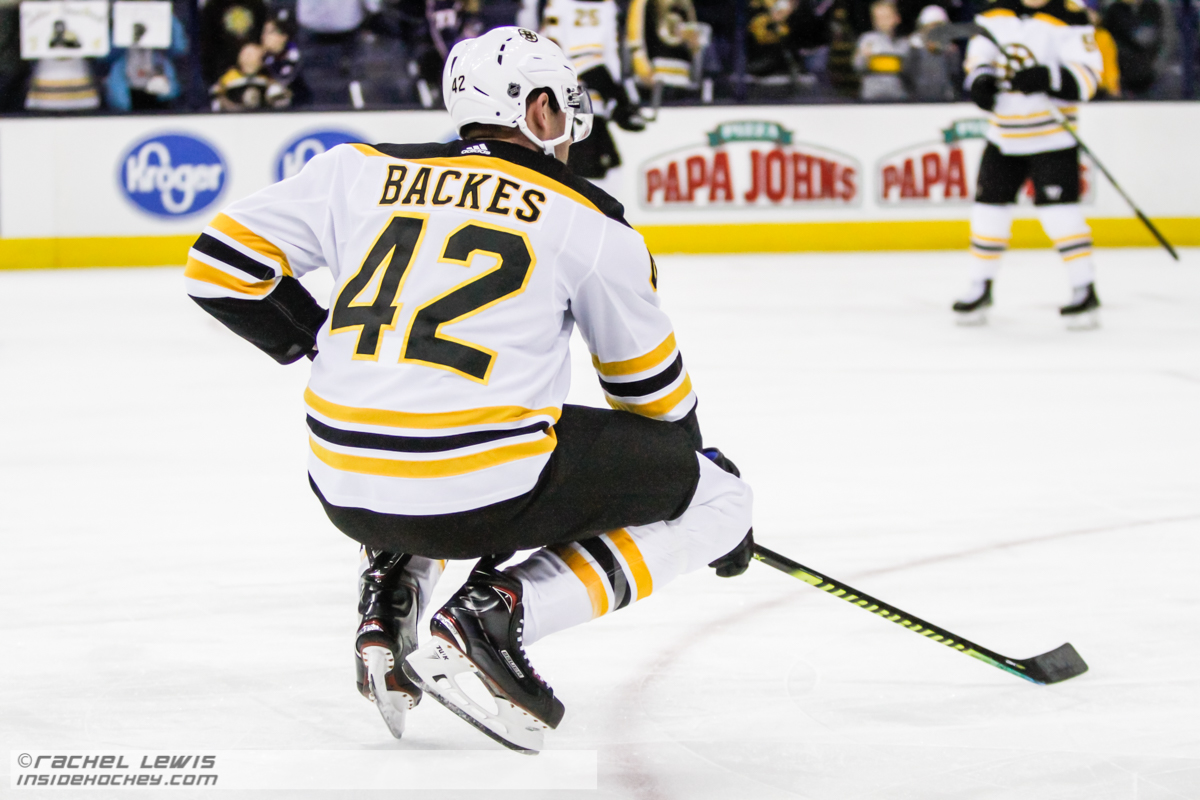 The Kase for Backes

He’s a Bruin. Only there are some oddities about it. He was injured and didn’t play for two games back on February 9thand 13th. He then was listed as “DNP” (did not play) in the media notes for three games. He hasn’t been on the ice since February 7th, in other words.

Only he has. He’s been practicing, and was reported to have skated the morning of Friday with the Avalanche coming into town in the evening. Only he’s been on reserve status for games. The club said he was afflicted with was with flu or flu-like symptoms. OK, so maybe it was precautionary so that no injury happened before he was hustled out of town. What you’re not allowed to say is that he has a history of fragility and concussions, and as we know, those can happen anytime and in the most docile-appearing situations, especially to someone prone.

A reporter I spoke with said that he had seen Kase in the morning after the trade was announced. He had a bundle of sticks in his hand, ready to head to his new team. He didn’t appear sick in any way. So what was going on?

Notice something? Not only is he not scoring at a tremendous pace. He also isn’t playing much, and never has. Never anything close to a full season. Why? Injury, largely. His career is four NHL seasons old now and he is yet to reach 200 games. His production isn’t 50 goals (43). His points are at about a 40-per-year pace.

What makes this guy so desirable that the Bruins would give up a player (Backes), a prospect (Axel Andersson) and a first-round pick (likely low, given their proficiency at gaining standings points)?

Part of it is that in sending Backes West, they send 75% of his salary with him. That means that the Ducks are on the hook for four and a half million bucks. Boston’s cap compliance looks like this, according to CapFriendly.com: They are at a projected hit of more than $82 million. This leaves just bits of change. Their “current cap space” is listed at about $4 million shy of hitting the cap. Either way, there’s not a lot of money to be spent. Getting Backes off the books must have felt good. The Ducks, by contrast, have four million or so to go to reach the cap. Thus the “hockey trade” that’s made is less about what’s going on on the ice than it is about what’s going on in the boardroom.

Now here’s what’s odd. The Hockey News online featured a headline that said, “Boston Bruins Win Ondrej Kase Trade—but that doesn’t mean the Ducks lose it.” How do those genius minds figure this? They claim Kase to be a potential breakout star. They point to the fact that Boston’s second line needs a right winger, and that a number of players have been tried on in the role, and failed there, including Karson Kuhlman, Anders Bjork, and Danton Heinen. (No, I’ve never heard of any of them, either, except for Heinen.)

The other upside for Boston is that Kase is a favorite of people who like analytics. Apparently they (the stats) tell us something that common sense and scoring numbers don’t: this guy is a top-flight player. See him with your own eyes and you’ll get a different impression: he’s fragile and streaky. He doesn’t get in there tough. He couldn’t play against the Bruins’ top players and do well. Now, he is one of them.

But his goals per sixty minutes and shots per sixty are super-high, say the numbers. Guess what? That doesn’t matter when you’re on IR, and in his case, it hasn’t translated into superstar production. His scoring numbers are middling, though about right for his salary. Let’s see how long it takes the Boston management to figure that out.

In short, what THN should have said was that Boston won the trade in the ideal world where Kase stays healthy and avoids lags in production (known as “streakiness” when talking about scorers), where cap relief is not an issue, and where numbers other than scoring figure in to results. But this world is far from ideal. One never wants to wish ill upon anyone, but his history is his history. Remember again: he has never played a full season. He’s been hurt twice or three time this year. He’s probably going to turn it on for the next ten games or so, then revert to form.

One scenario that the experts have is that Kase at times plays with Marchand and Bergeron. Maybe. Playing with good players instead of aging ones and kids might be a boon. But aren’t we missing something? Bergeron is perhaps the best player with the puck, ever. Marchand is one of the biggest pests, ever. But together they are able to work magic. Kase is, at his most effective, a finisher. But will he be able to do no more than finish, or will he have to find a completeness and balance to his game that he never has in the past in order to earn the respect of these guys and thus not just play with them, but PLAY with them.

He’s got a while to figure it out, because his contract runs through the end of next year at $2.6 million USD. Does he “have the potential to explode in his new situation?” We’ll see.

Dallas Eakins commented not  on the loss  of Kase but on the acquisition of Backes in his post-game comments. “Number one, we’ll have to get him up and running first. He’s been working out extremely hard, not on the ice very much. He does say he’s in great, great shape. Obviously, he’s going to take a big leadership role in our room. He’s been in the league a long time, and he’s been in that role, and that just doesn’t go away. I think he’s going to bring that hate-to-lose, wee bit of snarl, that we value here.”

Eakins said Backes is extremely hungry to get back to the ice and prove some people wrong. He was injured earlier in the season, then came back only to be placed on waivers, competing in just 16 NHL games this season thus far. Eakins has spoken with Backes and encouraged him to go see his family before he comes West. He’s been away from them doing dry-land training. That Eakins encouraged him to do family before resuming hockey  tells  you something about that man’s values.

People in the OC are hoping for a quick transfer of those values into winning. Not this year, maybe, but as time goes on.

Cam Fowler was scratched for Friday, but don’t read that as anything. He has a lower body injury. He was seen walking around in the press box area. No cast or boot. Eakins said after the game that he wasn’t sure of the update, but that Fowler was definitely ruled out for the weekend.

Notes on Friday’s game versus Colorado

The Ducks held Colorado tight at zeros for two periods. This included some stellar play by John Gibson in the second, when the MacKinnon-Landeskog-Burakovsky line was buzzing. They circled the zone relentlessly, placed shots in on Gibson, and then did it all again after a break to clean the ice. At their most wound up, they are unstoppable.

As period two wound on, the shots differential increased. The first period ended 10-10, but the second was 10-4 for Boston when the twine was finally bulged by  Boston  with less than four minutes remaining.

The Avs got a goal when Lindholm gave a puck away up the left boards. It went to Martin Kaut at the blueline. He passed to Compher as he moved to the net, and Compher rocketed one past John Gibson, who was flying left to right in a full splits. It was the 21stshot of the frame. That frame ended with the shots at 24-15 in favor of the visitors.

The third started with the Ducks still in the game, but not generating offense. They had their best chance of the half-period when Colorado was called for a bench minor for interference. The PP generated three shots including a slapper by Getzlaf. He earlier blew a chance at a good shot from the right of the slot, instead passing through the center attempting to hit Sam Steel. It went past Steel and was lost.

The Ducks pressured in the ten minutes to the end, and while there were no spectacular saves made by Pavel Francouz, he held the fort and got himself a 1-0 shutout victory. Shots were 29-26 for Colorado.