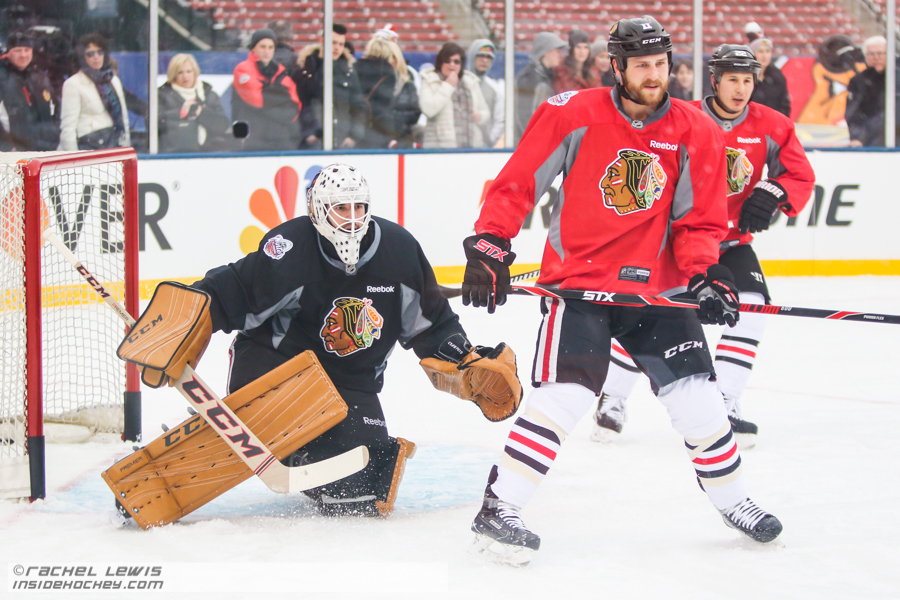 My Thanksgiving has been pretty much the same for the last 15–20 years. I get up and watch some of the parade with my family; raid the candy bowl and other snacks left out in the dining room; eat copious amounts of food at dinner; and finally, I watch mostly the same teams play football, every year. It’s tradition and not lost on this sports writer. And this year was no different, but it was on this day while taking in the regular festivities that I decided on the best way to deal with an NHL problem.

Last week the National Hockey League announced that the Chicago Blackhawks would host the Boston Bruins in the 2019 NHL Winter Classic. The league, which is as much a slave to history as any other, is starting to inadvertently install another tradition. It’s getting people ticked and if only they’d just be transparent about it, then maybe it would actually be OK.

The Blackhawks are far and away a favorite when it comes to taking the game to the elements. Since the league began doing so in 2003, Chicago has been featured in five outdoor contests. Their 2019 meeting at Notre Dame Stadium in South Bend, Indiana, an approximately 90-minute drive from the Windy City, will be the third time that the club will serve as a host and sixth time it will be among the participants in one of the season’s biggest spectacles. It’s also a whole six more times than eight other franchises (Vegas held an exhibition game in 1991 between the Kings and Rangers). Not far behind them are the Pittsburgh Penguins, 5 and Philadelphia Flyers, 4. Last week, the league also confirmed that the two will play in the February, 2019 Stadium Series at the Lincoln Financial Field, home of the Philadelphia Eagles.

Maybe it's much too early in the game
Oh, but we thought we'd ask you just the same
What are you doing New Year's
New Year's Day?#WinterClassic pic.twitter.com/Kic5ayOurc

This season’s Winter Classic sees the Buffalo Sabres, host of the first-ever Winter Classic take on the New York Rangers. The Blueshirts, who are prohibited from playing home games away from Madison Square Garden, will be the away team in January when the two play at Citi Field, roughly an hour subway trip from the Big Apple. Despite not being able to officially host, the game will mark the Rangers fourth time outdoors and third time in their home city. Needless to say, they’ll be well-represented. Again.

And I’ll offer some credit to the league, who’ve held two games in California and regularly include Canadian markets in spite of heavily advertising to a U.S. television audience. And weather aside, I can understand if the league isn’t exactly chomping at the bit for Hurricanes-Panthers at Marlins Park in 2020. What is starting to get old is the regular song and dance between the league and fan bases, crying out favoritism whenever the event is first leaked.

The solution? Let’s keep going outside. And, let’s keep it in these markets.

Is it annoying seeing the Blackhawks crank out another special jersey? Yes. But it doesn’t have to be this way. The league doesn’t have to be coy about it either. The idea that Chicago or Philadelphia and Pittsburgh or New York are good marketplaces isn’t a new concept. Nor is the fact that they house some of the league’s most-marketed players. We can accept this and with time, fans can also accept that this can be like the NFL on Thanksgiving. Chicago is the Detroit Lions and Pittsburgh can be the Dallas Cowboys. One gets the Winter Classic, the other gets a Stadium Series. And New York, give them something in that area, there are three teams in the area and venues to hold it. Heck, you can even change the location every so often to include another market, maybe Ohio and Minnesota get the honors one year.

NHL Commissioner, Gary Bettman has long been a booster of taking the game outside. He’s never gone deep into why some markets host or participate more than others, but he’s admitted that a variety of factors come into play in deciding who hosts. And from a business perspective, that’s totally fine. But 10 years into doing this regularly and it’s getting a little redundant. But in a league where tradition is king, why not start a new one? Sure, it will stink for other fan bases, but maybe that’s part of the tradition–going into one of these spots to catch the annual outdoor game in Chicago or Pittsburgh or New York.

With Brandon Saad back in the fold with Corey Crawford, Patrick Kane and Jonathan Toews, the Blackhawks should continue to be a draw in the years ahead. Meanwhile, Sidney Crosby and the Penguins still have some time left to be a national draw. Let’s give this to fans. And, let’s totally accept it. It’s cold there and that’s kind of important. And they can draw an audience on New Year’s Day despite ensuing hangovers. Let’s give those teams credit and let’s end the false hope to other franchises.

Biggest gain that can come from all of this? We can end the production of more special edition jerseys. I’m not sure how many more designs the Penguin logo can take before it morphs into a sketch of Danny DeVito as the “Penguin.” And nobody needs that.