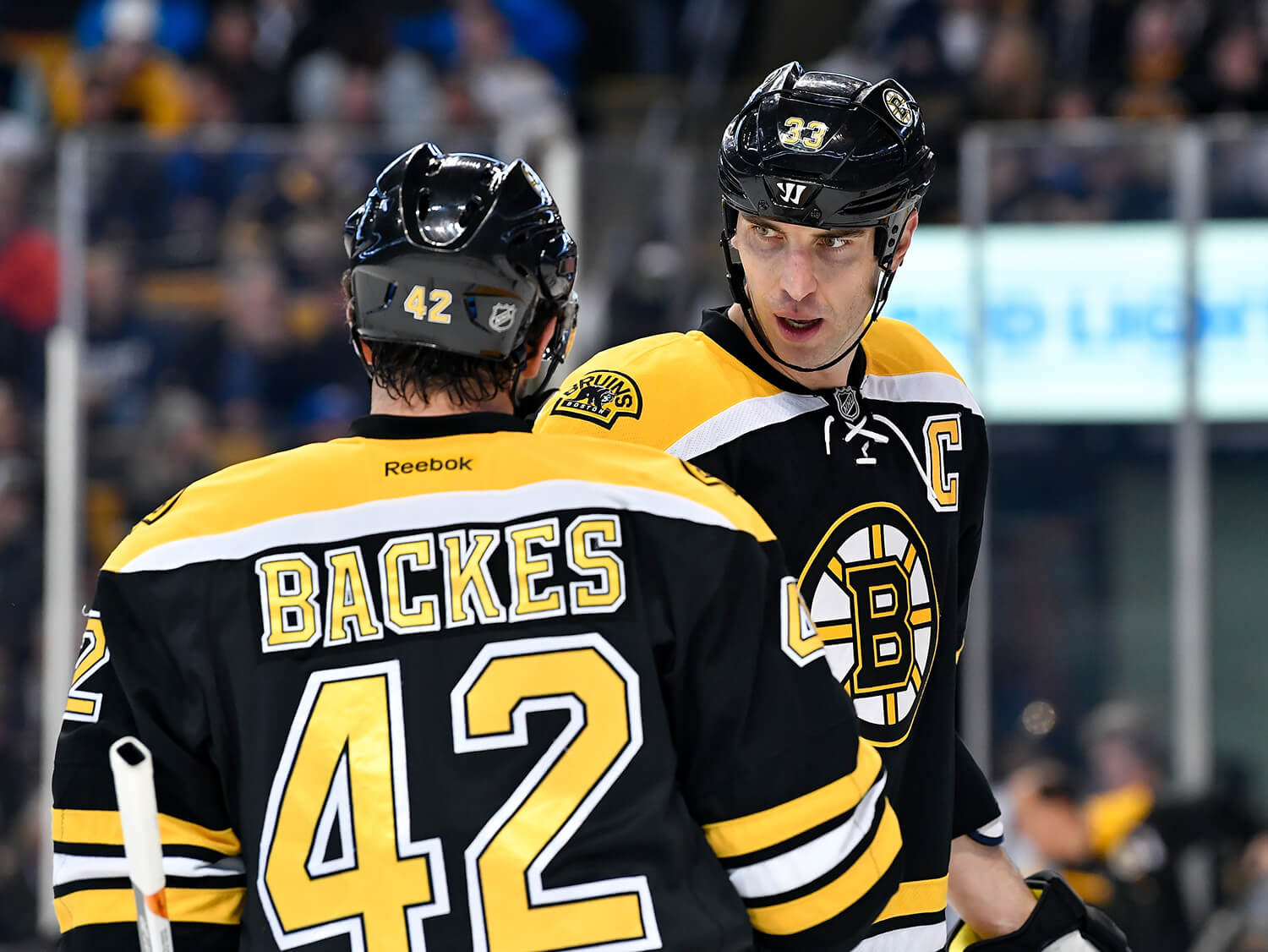 Nov 21, 2016; Boston Bruins defenseman Zdeno Chara (33) talks with right wing David Backes (42) before a face off during a NHL game against the St. Louis Blues.

Thanks To Physical Play, Boston Dominates Toronto In Game Two

In one of the most lackluster and lazy games in recent memory, the Bruins lost Game One of the first round of the playoffs to the Toronto Maple Leafs by a score of 4 to 1. The Bruins mismanaged the puck in all three zones of play, turning it over countless times and allowing the Leafs to capitalize on multiple odd man rushes and breakaways.

“We talked a lot about taking care of the blue lines and you know, playing Playoff hockey, and a lot of that wasn’t done tonight,” Bruins forward Patrice Bergeron said after Game One. “Too many turnovers, when that happens, you don’t really establish your forecheck or get any rhythm out of it.”

The Bruins looked to establish the forecheck and the physical play early in he first period of Game Two. The Black and Gold came out with a frenzied tempo, attacking the Toronto net, and taking the body whenever possible.

After peppering Toronto goalie Frederik Andersen, forward Charlie Coyle would put Boston on the board first with a pass from Game One healthy scratch, David Backes. Backes created this opportunity by checking Toronto defenseman Nikita Zaitsev behind the net, muscling the puck loose, and dishing it out front to Coyle.

“His [David Backes] line created the loose-puck turnover on the first goal,” Bruins coach Bruce Cassidy said about Backes’ physical play. “I think he recognized what he needed to do. He watched the game from up top the other night. Something we were lacking. We addressed it. We needed him to do it. We needed other players to do it. All of a sudden you drag other people in. Jake DeBrusk, David Pastrnak had some great hits.”

“Him [Backes] and [Danton] Heinen were down there creating havoc and I was waiting out for the puck to pop and it did right on my stick,” Coyle said. “It was a really nice play by them to get it through.”

The Bruins kept this physical play and momentum going the entire game. Pastrnak would make an amazing behind the back pass to a trailing Brad Marchand, who patiently waited for Andersen to make a move, and once the goalie had committed, slipped the puck past him for a 2-0 Bruins lead.

“Saw Pasta [David Pastrnak] lay a few bodies and that kind of gets you jacked up,” Bruins winger Chris Wagner said about the physicality of the game.

Another Bruin who really stepped his physical game up was forward Jake DeBrusk. DeBrusk was finishing his checks all night long and got under the skin of multiple Leafs players but no one more so than Nazem Kadri. It seemed like every time Kadri was on the ice, DeBrusk was right on top of him. After numerous run ins and the game out of hand for the Leafs, took a run at DeBrusk, crosschecking him to the head. Kadri received a five-minute major and a game misconduct for the illegal hit.

Kadri, who is no stranger to disciplinary problems and suspensions, he’s been suspended four times in his career, the last time was for boarding then-Boston forward Tommy Wingels in Game One of last year’s first-round playoff series. Kadri will have an in-person hearing with the Department of Player Safety for his hit and will more than likely miss the remainder of the series.

Boston would win the game 4 to 1 and even the series up at one game apiece.