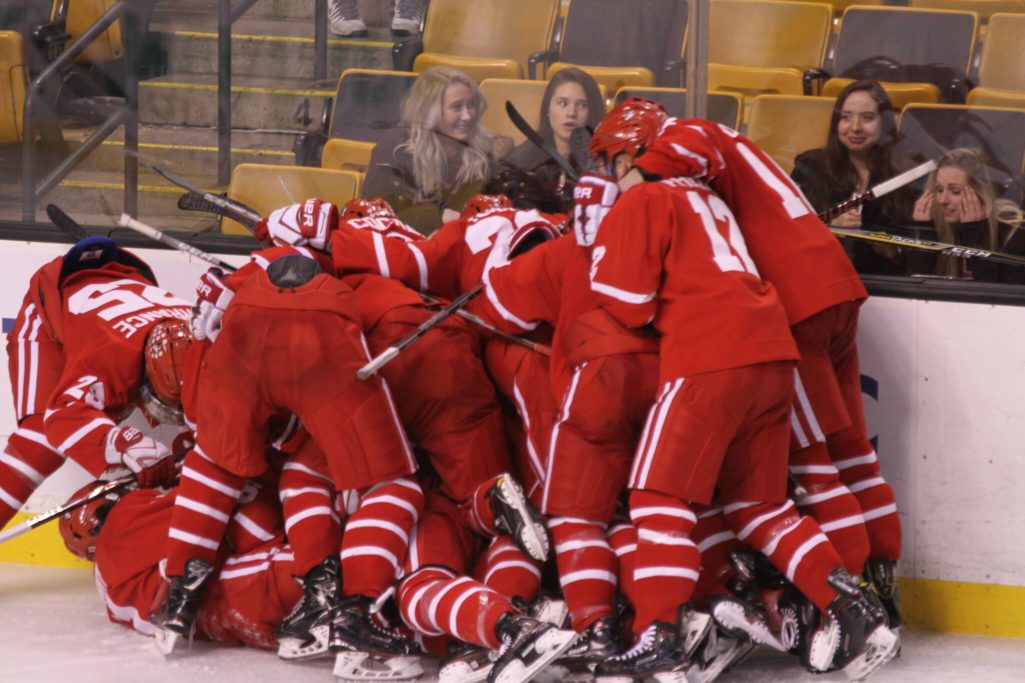 Boston, MA- The Boston University Terriers and Harvard University Crimson have staged some memorable Beanpot matchups in recent years. In 2015, the Terriers outlasted the Crimson in a double overtime, 101 shot classic. In 2017, Harvard claimed the school’s first Beanpot title in 24 years by beating BU 6-3. This year, the teams pushed each other to the limit once again with another double overtime thriller.

The opening period was even, with BU winning the shot total only 13-12. The Crimson did out attempt BU 28-19, but the Terriers maximized their only power play chance after John Marino was called for a cross checking minor. Logan Cockerill beat Crimson goalie Merrick Madsen on a one timer from Drew Melanson to put BU ahead 1-0. The Crimson controlled the rest of the period, getting two power plays from Brien Diffley penalties, but could not even the game before the intermission.

Harvard completely dominated the second period, outshooting BU 20-4 and out attempting the Terriers 32-12. Only Jake Oettinger’s magnificent performance kept the game close. He saved 19 of 20 shots and stopped a dozen Grade A chances. The only shot that got by him was a Ty Pelton-Byce shot from the right slot off a Ryan Donato pass in the final five minutes of the period. BU limped into the dressing room after what head coach David Quinn called “Maybe our worst period of the year” tied 1-1 on the back of Oettinger’s performance.

Each team got a goal early in the final period. Terrier Captain Brandon Hickey drove a backhander by Madsen 32 seconds into the frame. Jack Badini answered while the Public Address Announcer told the crowd the scoring on Hickey’s goal. Badini’s goal was a rebound off a Nathan Krusko shot that came 2:04 into the final stanza. The rest of the frame was controlled by BU, with the Terriers winning the shot totals 12-7. BU got some last second chances to win the game in regulation, but Madsen stopped the offense and forced overtime.

Overtime tested each goaltender and tired both teams. The Terriers won the shot total slightly, 12-10, and drew the best from Madsen. The Senior Captain made two highlight caliber saves late in the session. One was a glove save sliding from left to right and the other was controlling a deflected puck that bounced over his head and behind him.

The Terriers net minder Oettinger was also excellent, saving every shot he faced, including 3 when he lost his stick. The teams could not score in the first overtime and a second session was needed. Ty Amonte did not let the second overtime last long. 1:55 into the stanza, the freshman second generation Terrier drove up the left size of the rink, and fired a shot on net, and the puck trickled through Madsen to give BU a 3-2 victory.

Crimson Head Coach Ted Donato was devastated after the game.

“I feel badly for our players. The game was a series of momentum swings. Our players left it all on the ice and we didn’t pull out the win”

Harvard’s record drops to 10-9-4 with the loss. Donato is flying to South Korea for the Winter Olympics. The Crimson will regroup to play at Union College on Friday night and finish the Beanpot with a tilt against Boston College on Monday afternoon. Puck drops at 7 pm in Schenectady and at 4 pm in Boston.

Terrier Head Coach David Quinn was elated after the win, but focused on the task of winning another trophy.

BU runs their record to 15-11-2 with the win. The Terriers host UMass Amherst on Friday night and will skate for their 31st Beanpot Title against Northeastern on Monday night. Puck drops at 7 pm at both Agganis Arena and TD Garden