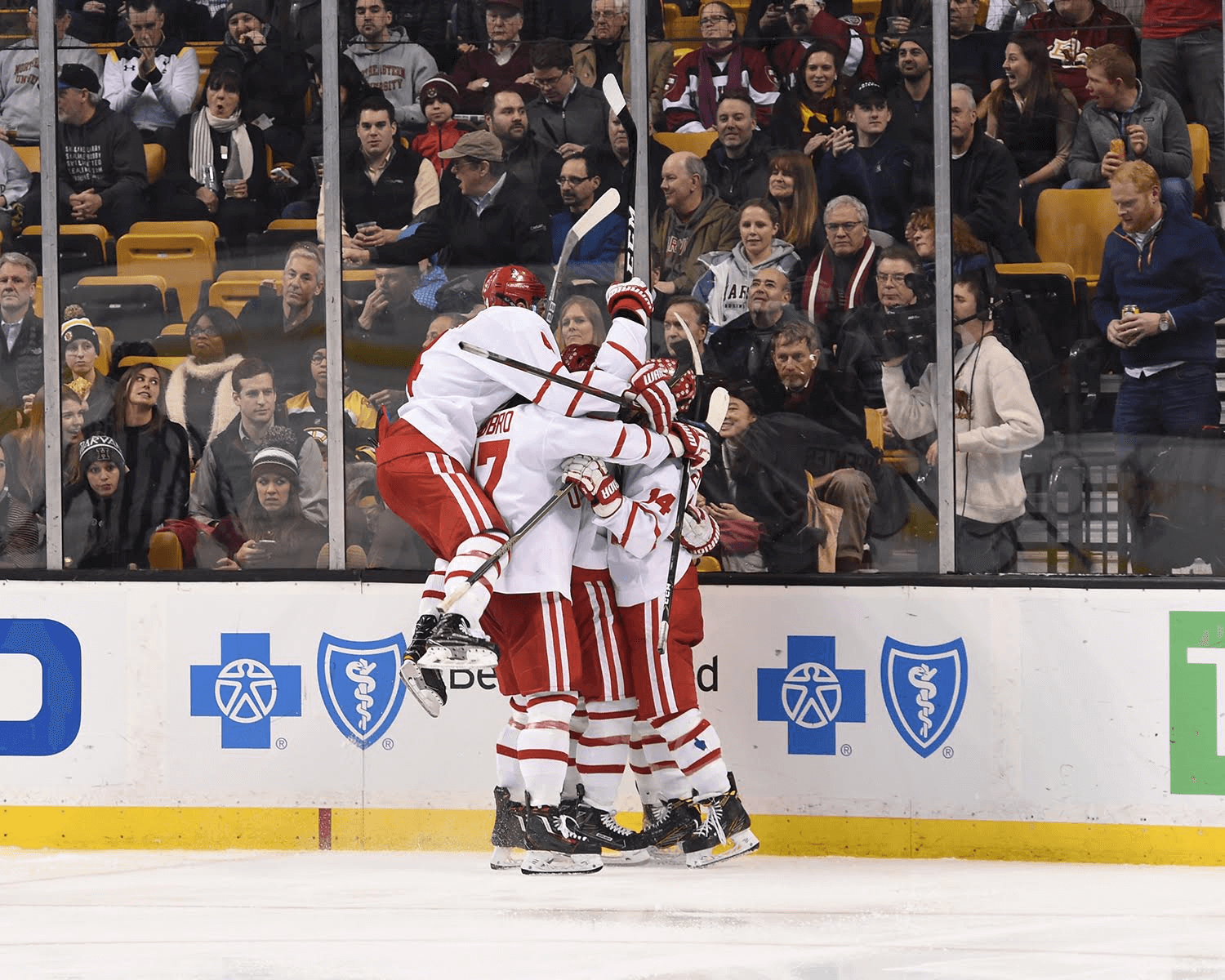 Boston, MA- The Hockey East Quarter Finals kicked off on Friday night with a bang. Every matchup was decided by one goal. One of these matchups was a first time meeting between Boston University and Connecticut.

The dramatic ending masked a slow opening. The first two periods were marred by stoppages and long reviews. There were still plenty of entertaining sequences in the early going. UConn came out firing on Jake Oettinger and caught a break.

In UConn’s defensive end, a puck deflected up to the top of the glass and hit the netting that should’ve called for a stoppage. The refs missed it and play continued for another 20 seconds. At the BU end, Max Kalter got to the left circle and lasered a shot home to put the Huskies ahead.

While the fans booed the officials for not killing the play, BU rebounded. Eighteen seconds after the first goal, Jordan Greenway broke through the crown and beat Adam Huska five-hole to tie the game.

Almost immediately, the controversy was forgotten and the game was on. Only 3 minutes later, BU threw a puck in front of Huska and a scrum ensued. The puck squirted loose and Drew Melanson cleaned up the mess to give BU a 2-1 lead. UConn ultimately won the shot total 11-8, but the Terriers held the lead entering the intermission.

The shot totals were close to even, 11-10 UConn, but the pace clearly belonged to the Huskies. BU looked sluggish and skating in quicksand while UConn moved through the ice rather easily. A quick start got Karl El-Mir free for a goal 1:31 into the 2nd to tie the game. UConn kept up the barrage to break the tie with 5:29 left in the period. Maxim Letunov tipped in a Derek Pratt shot to give UConn a 3-2 lead ahead of the intermission.

The third period opened up in pace and offense with 31 shots between the teams. BU got a chance when Jesse Schwartz committed a holding penalty 1:31 into the stanza. BU converted the chance 31 seconds later. Dante Fabbro fired a slap shot from the blue line and Jordan Greenway tipped in the shot to score his second of the night and tie the game.

Play only intensified late when UConn seemingly landed the knockout. Shane Bowers committed a hooking penalty and Benjamin Freeman knuckled a wrister by Oettinger to give UConn a lead with 5:03 left. BU refused to die. Chad Krys lugged a puck into the offensive end. He lost control of it, but recovered before UConn could clear the zone. With three Huskies between him and the goalie, he fired a wrister that roofed Huska and tied the game. The teams skated out regulation and the first playoff meeting between the teams went to overtime.

BU dominated overtime, outshooting UConn 5-2 and dictating the pace for the first time all night. It did not take long to end the night. With 5:02 burned off the clock, Logan Cockerill and Bobo Carpenter got the puck behind the net. Carpenter wrapped it around and fired it on net. The puck snuck through Huska and the Terrier emerged from the game with a 5-4 overtime winner.

With his team’s first Hockey East Quarterfinal round game in the books as a loss, UConn Coach Mike Cavanaugh was disappointed but focused on the next night.

“I think the fans got treated to a pretty good hockey game. I was very proud of our team for the effort. It’s not a single elimination series, so we’ve gotta get ready for tomorrow night.” UConn falls to 15-18-2. Adam Huska made 33 saves in his first game since breaking his wrist in early January.

Terrier Coach David Quinn was happy about the game’s result, but not the whole performance.

“Just gotta find a way to win playoff games and we did tonight. I’m not happy with the start. We just looked sluggish. I thought they had a lot more will than us and were faster than us. The good news is that we got better as the game went on. The third period was our best period. I’m not surprised this game went to overtime. And if we thought this game was hard, tomorrow’s gonna be that much tougher.”

Boston University leads UConn 1-0 in the best 2 of 3 playoff series. The teams play Game 2 of their series on Saturday night. Puck drops at 7 pm at Agganis Arena.