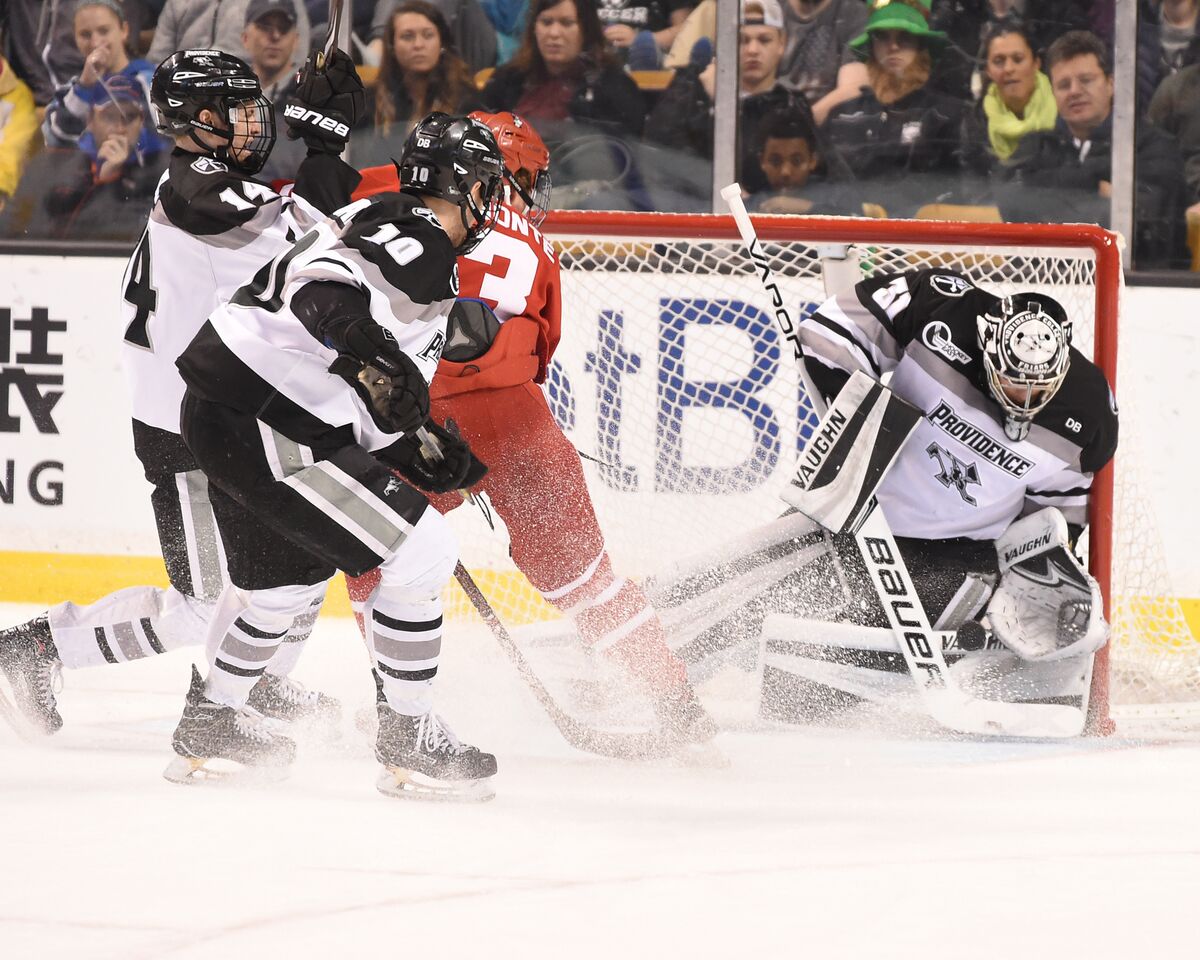 Boston, MA- The 2017-2018 season has been a tale of two seasons for Boston University. At season’s start, BU was expected to walk to the Hockey East Title and erase the title of “almost champions” from their marquee. On January 6th, after losing 3-0 to Maine, the Terriers stood at 8-11-1. Head Coach David Quin was embarrassed after the game and there was little hope for the Terriers. After that embarrassing loss, the Terriers gathered themselves and dominated, going 12-3-3 to reach the Hockey East Semi-Finals and give themselves a chance at the NCAA Tournament.

In their Friday night game with ancient rival BC, BU weathered the storm and won in overtime, setting up a chance at the Hockey East Title and a chance to exorcise some old demons against Providence College Friars.

The last time Providence and BU met on the ice a TD Garden was in the 2015 National Championship Game, which saw the Friars break the Terriers’ hearts en-route to the Friars’ first NCAA Title. After an excellent season that guarantees an NCAA Tournament trip and a thrilling OT winner over favored Northeastern, the Friars faced BU expecting to break their hearts and end the Terrier season again. The two desperate teams offered a gritty, ugly game that shone the spotlight on the goalies.

Jake Oettinger had his turn first, as Providence outshot BU 18-9 in the first 20 minutes of play and out-attempted BU 32-17. Some funky bounces almost spelled disaster for BU, as the puck bounced to Oettinger’s crease off the glass, almost skipped off a teammate before Oettinger make a save with his skate, and the sophomore netminder nearly oléd a puck into the net, but controlled it to stop a disaster. Hayden Hawkey stopped all nine shots he faced, but Oettinger was the star of a quick and penalty-free opening frame.

Hayden Hockey took his turn in the second period. BU outshot PC 12-6 and used the size of Jordan Greenway and Brady Tkachuk to outhit and wear down the Friars. A parade of four penalties in less than two minutes made the game ugly and forced the teams to simplify their attacks. BU responded well and fired on Hawkey. Fortunately for PC, their junior tender answered the bell and sent the game scoreless to the second intermission. The game would be determined by which goaltender would blink in the final period. It was Hawkey, and it was induced by one of Hockey East’s best stories this year.

For three years, Drew Melanson toiled in Troy, NY, playing for the Rensselaer Engineers. In his three years, the Engineers finished as high as fifth place but never made a run at a championship of any sort. Early in his junior year, the Paramus, NJ, native decided he would leave RPI to play somewhere else. He graduated a year early and reached out to other college teams. David Quinn got to him. The coach sat down with the Melanson family and offered a spot on the roster but no scholarship. Melanson accepted and enrolled in a graduate program in Administrative Studies. He played out of position for the first half of the season and was not productive as a center.

At the turn of the year, Quinn put Melanson back on the wing with Jordan Greenway centering him and Brady Tkachuk. The line clicked and Melanson found a home on Commonwealth Avenue. He rewarded his coach’s faith with the equalizing goal on Friday vs BC. And on Saturday, be made the biggest play of the game.

Fifty-six seconds into the third period, BU’s top line forced a puck deep to the end boards. Jordan Greenway won possession from the Friars defense and feathered a pass to Melanson. The senior transfer snapped the puck off the post and into the net to give BU a 1-0 lead. From there, BU continued to dictate the pace and control the rhythm of the game. The Terriers hit the Friars and wore out their opponent. Providence only attempted six shots in the third and Jake Oettinger was perfect, stopping every last chance Providence got.

With two minutes left, Providence pulled Hayden Hawkey from the net for an extra attacker. The Terriers cleared the puck to Providence end and pressured the Friars into a turnover. Bobo Carpenter picked up the loose puck, fired it into the open net, and jumped into his bench in jubilation. The final seconds wound down and Boston University clinched their ninth Hockey East Tournament Championship.

Friars Head Coach Nate Leaman was disappointed, but forward-thinking after the game. “We had a good first period. That was the difference for us, to have that first period and come away with nothing. They made a push and wore us out. I loved my team’s heart. We have to take the lessons from both of these games we played into next weekend.”

Providence slips to 23-11-4 on the year. The Friars were valiant in their first Hockey East Title Game since 2001 but remain looking for their first championship since 1996. PC will play next weekend in the NCAA Tournament.

The Terriers were ecstatic after the game.

“Not one of us wanted the season to end. And we showed it. We were the more desperate team and we showed it tonight” said Jake Oettinger. Captain Brandon Hickey was particularly happy after the game. He played on the 2015 team that had their hearts broken by Providence. “Yeah, it definitely feels like a little bit of redemption. Especially playing at TD Garden. It’s obviously a special thing to go out there and win a championship. But I kind of feel like we slayed our demons a little bit. For the senior class, it felt outstanding. I couldn’t be happier for the guys out there for them to get to experience winning a championship here because it’s something pretty special and it’s something that you’ll remember for the rest of your life.”

Jake Oettinger won the Bill Finn Award as the Hockey East Tournament MVP. He stopped 36 shots to beat BC on Friday and stopped all 30 shots Providence threw on net in the Championship game.

” Well I can’t really put into words how good I feel for the school and it’s been a tale of two seasons for us. The last time we played we played Providence, we were 8-11-1 when we tied them and it looked like there was really not a lot of hope. We just started getting better goaltending, our d-corps started playing better, our freshman started to emerge a little more, it just started snowballing. We kept at it.”

The Terriers improve to 21-13-4 on the season. The win secures BU’s ninth Hockey East Championship and the program’s fourth consecutive NCAA Tournament appearance. The seedings for the NCAA Tournament will be unveiled on Sunday at Noon on ESPNU.