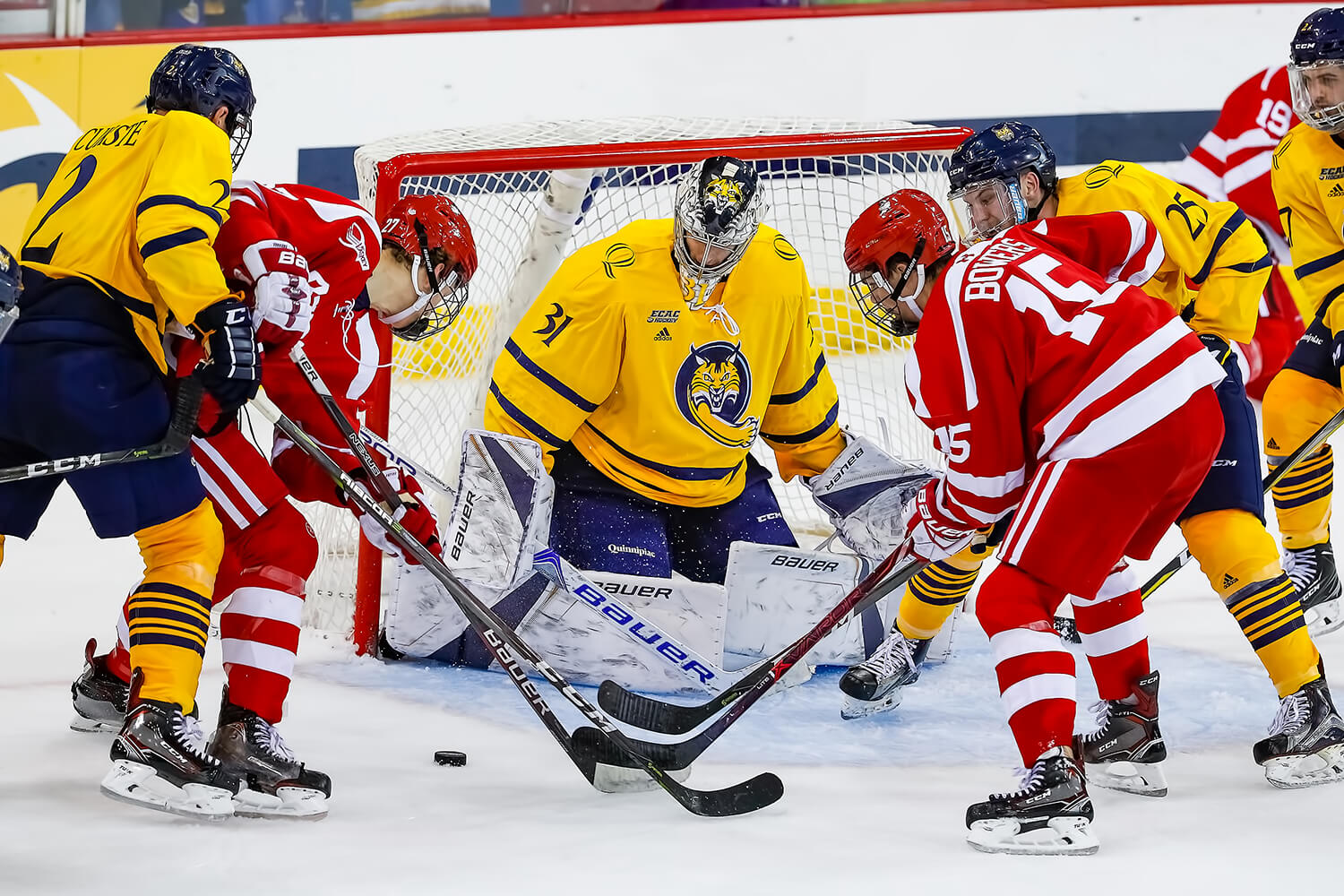 Sunday saw rain, wind, and physical hockey return to the TD Bank Sports Center in Hamden, Connecticut. The #2 ranked Boston University Terriers traveled to play the #14th ranked Quinnipiac University Bobcats in the Bobcat’s first home game of the season. In only the third ever meeting of these programs, the action reflected the weather outside: blustering, chaotic, and tense.

Jordan Greenway and Landon Smith set the tone at the opening faceoff, wrestling for position at the opening faceoff. The officials told the two to back off and dropped the puck, but other players got into the fray. Former Terrier Brandon Fortunato leveled Greenway twice in the first 20 seconds of the game. The Bobcat fans approved and a war ensued atop York Hill. In the first two periods, the teams committed 12 penalties between them and served 24 minutes of penalty time. Shoves were frequent, and were this not a college game there likely would have been a fight or two.

Amid all the hitting, there was an excellent hockey game. Freshman Keith Petruzzelli started his first collegiate game for Quinnipiac and played well. He saved 11 BU shots in the first period and 12 in the second. Quinnipiac’s offense struggled to get in rhythm for much of the first, only getting five shots on BU goalie Jake Oettinger. But the Bobcats got the first score on a dramatic goal. Alex Whelan tried to screen Oettinger on a blue line shot but blocked the shot off his leg. He crumpled to the ice and limped off in pain. After a few minutes, Whelan returned to the ice. Logan Cockerill’s blue line shot was blocked by Craig Martin, Whelan picked up the loose puck, drove to the right circle, and beat Oettinger for a 1-0 Bobcat lead.

The second period saw New Canaan, CT, native Patrick Harper dazzle in his homecoming. Kevin Duane and Jordan Greenway were called for matching roughing penalties early in the frame. Then, Kevin McKernan was called for a cross-checking penalty. 13 seconds into the four on three power play, Harper tied the game from Petruzzelli’s doorstep. The game stayed tied for ten minutes until Landon Smith entered the BU zone, left the puck at the blue line, and Bo Pieper took the puck to the high slot to beat Oettinger for a 2-1 QU lead.

The third period saw no penalties, but more hits and more play from BU’s star sophomore. Only 53 seconds into the third, Harper drove the puck into the Quinnipiac zone and silenced the Bobcat faithful by beating Petruzzelli for a 2-2 tie. The goal was Harper’s second of the afternoon and fourth in two games. He is currently leading the NCAA in goals scored in the early going.

Neither team got many good looks in the third after the Harper goal. BU got only six shots on goal and Quinnipiac only got three on Oettinger. Regulation time expired and the teams played overtime. The chances got better in the extra five minutes. Brandon Fortunato almost beat Oettinger backhanded for the game winner against his former team. But Oettinger made that and four other saves to keep BU in the game. With only 41 seconds left, BU found their chance to win. Harper drove the net, the puck came loose, and Shane Bowers threw it by Petruzzelli to win the game. There was controversy on the goal, as the net came off the mooring for a second. But the officials reviewed the goal and awarded it to BU. With the win, BU goes to 2-0 on the young season. Quinnipiac ended a tough weekend, tying Boston College on the road on Friday and losing to BU on Sunday. Their record is 0-1-1.

After the game, BU Coach David Quinn praised his team’s efforts, particularly his leading scorer, Patrick Harper. “The biggest jump in college is often freshman year to sophomore year. He’s a bit older and more comfortable. I’m happy with the way we’ve played these first two games. There’s been a lot of physicality. The whistle has blown and the other team is ticked off because we’re at the net and causing problems.”

BU will continue their season with two home games next weekend against the Mavericks of Minnesota State, Mankato. Puck drops at 7:30 on Friday and 7 on Saturday.

Quinnipiac Coach Rand Pecknold was not happy with his team’s efforts: “We took a lot of selfish and stupid penalties and we can’t do that against a team like that.”

The Bobcats will look for their first win of the season at home next weekend when the Vermont Catamounts make the trip from Burlington to Hamden. Puck drops on Saturday afternoon at 4 pm.