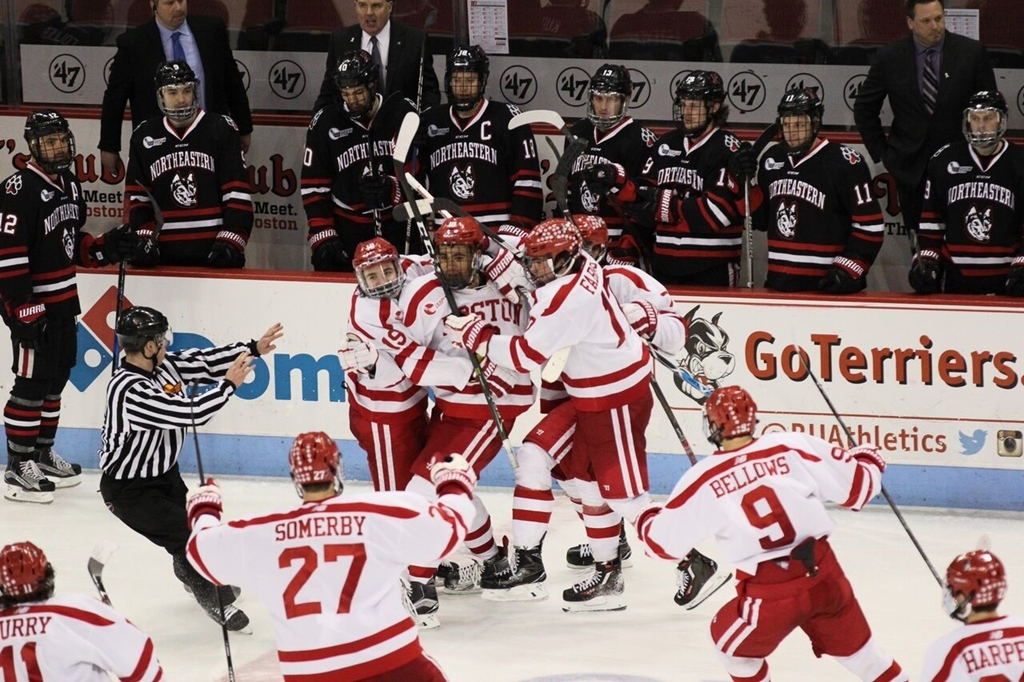 Boston, MA- Boston University opened Albie O’Connell’s tenure very poorly. Four consecutive losses and two embarrassing conference shellings signaled trouble for one of college hockey’s blue blood programs. The Terriers had a tall task to reverse course on November’s first weekend against Beanpot rival Northeastern. The Huskies upset St. Cloud next week and were riding high, expecting to put some distance between themselves and the struggling Commonwealth Avenue schools. They appeared poised to do so against BU on Thursday night at Matthews Arena.

Early in the game, Grant Jozefek and Bobby Hampton put two pucks through normal Terrier back up goaltender Max Prawdzik and claimed the 2-0 lead only 3:11 into the game. Coach O’Connell pulled Prawdzik a few seconds after the second goal and put his normal starter, Jake Oettinger. The Dallas Stars draft pick held firm for the rest of the period while BU’s skaters gathered themselves on hostile territory. Logan Cockerill took a turned over puck from his own end, drove alone up the ice, and beat Husky goaltender Cayden Primeau to get BU on the board before intermission.

The teams combined for a heavily offensive showing in the second and third periods with BU outshooting Northeastern 21-15 in the middle frame. Both goalies were excellent but gave up one goal each. Patrick Curry got BU’s and Patrick Schule got Northeastern’s. The Huskies entered the final frame ahead but surrendered two goals within 4:05 of the opening puck drop. Joel Farabee and Bobo Carpenter gave BU

the Terriers their first lead since the second period of their season opener against the Mavericks in Mankato, back on October 12th. Northeastern finally clicked on the power play when Grant Jozefek netted his second of the night to tie the game two minutes after surrendering the lead. Less than five minutes later, Patrick Schule opened the Huskies lead again with his second that night. Unfortunately for NU fans, Chad Krys revived the Terrier power play and tied the game shortly after Northeastern’s man advantage. The game entered overtime and stayed tied after the five-minute extra session.

Round one of the weekend was inconclusive. Two nights later, the teams reconvened at Agganis Arena and staged a more definitive game. Northeastern dictated the pace of play and won the shot total 38-29. Unfortunately for them, Jake Oettinger pitched a shutout most of the night and the Terrier offense carried Thursday’s firepower to Saturday night. Dante Fabbro broke the ice with a breakaway goal in the opening frame and scored a power-play goal early in the third period to secure the game. Bobo Carpenter and Patrick Curry added goals to thrill the boisterous Terrier fans. Matt Filipe ended Oettinger’s shutout attempt with 1:45 remaining in the game. Still, the Lakeville, MN, native posted a 37 save effort to earn the Terriers their first win under Albie O’Connell’s leadership.

Huskies Head Coach Jim Madigan was furious after the first game, calling it a “Bad tie”, and annoyed after the Saturday loss. Both times, he made his postgame point in one statement with no one in attendance seeking a clarifying or follow-up question. Northeastern drops their record to 4-3-1 overall and 1-1-1 in Hockey East play. They continue their conference schedule next weekend with home matchups against Connecticut and UMass-Lowell on Friday and Saturday night. Puck drop is at 7 PM both nights.

O’Connell was relieved after both nights, particularly with Saturday’s victory. “I’m happiest for the players. They’re the ones who go out and compete. They were on the short end a couple of times in Minnesota State, and we felt like we had a good game the other night. We wanted a W and I’m glad we got it tonight.”

BU improves to 1-4-1 overall and 1-2-1 in Hockey East. Their work continues with only one game next week, when they travel to Durham, NH, to play the New Hampshire Wildcats. Puck drops at the Whittemore Center at 7 pm on Saturday night.