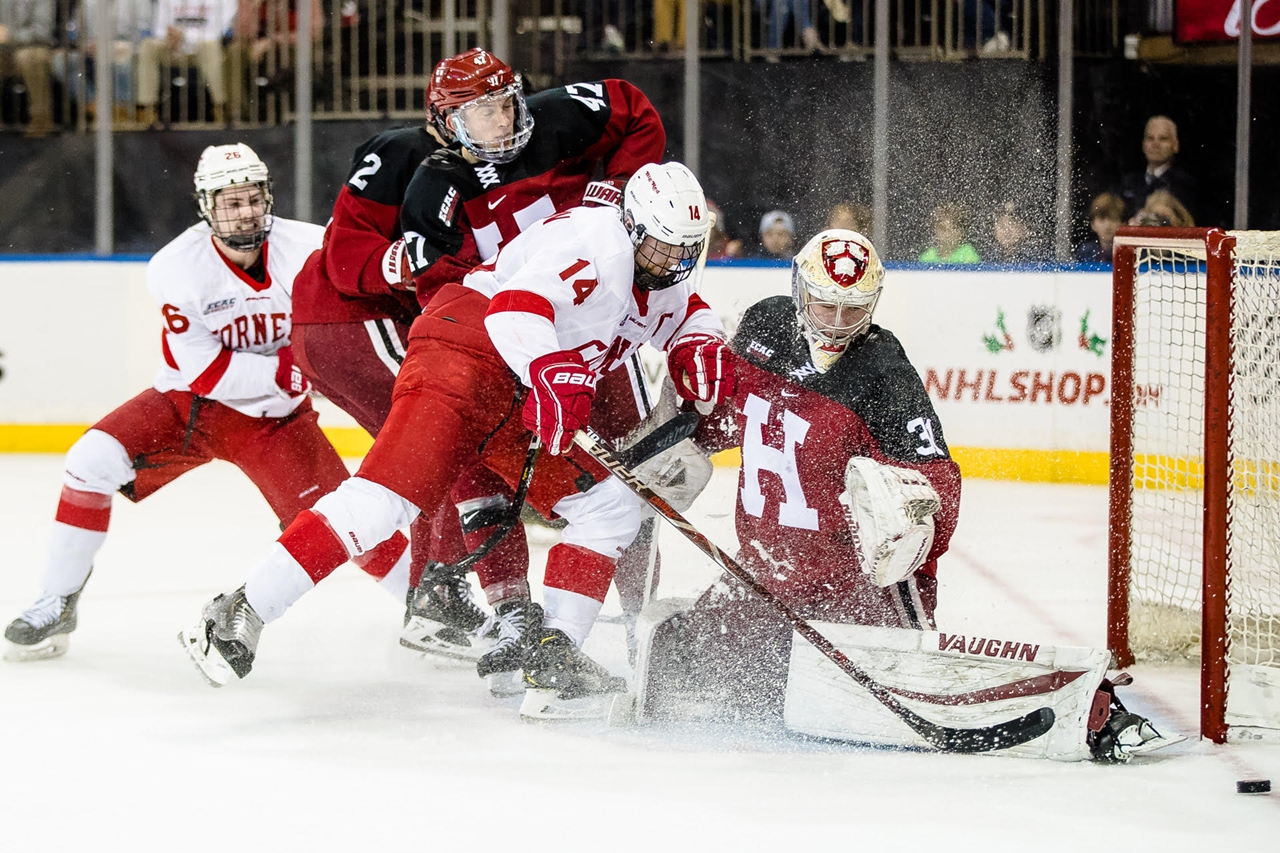 Allston, MA — Boston University and Harvard posted puzzling first halves of the season. BU finished at .500 in Hockey East after a wild roller coaster stretch. Meanwhile, Harvard finished 2018 in the ECAC’s tenth place despite an overall + .500 record and elite power play. Harvard already started their year by hosting RPI in a controversial 3-2 overtime victory while BU was returning to the ice for the first time since December 14th against Dartmouth. The teams met at Bright-Landry Hockey Center on Tuesday night in a potential Beanpot preview, but did not reach a decisive end.

BU got the early jump on the Crimson with a fourth line offensive burst. Ryan Cloonan drove the puck into the offensive zone 2:05 in and dished it to Matthew Quercia. The freshman from Andover, MA, scored his first collegiate goal to cap the strong two-on-one and give Cloonan his first assist and point this season. The remainder of the period was mostly even, with Harvard winning the shots battle 9-8. Jake Oettinger and Michael Lackey stopped every remaining puck in the stanza and sent the game into intermission at 1-0 in BU’s favor.

The Terriers tilted the ice in their favor in the second period, winning the shot total 13-8 and drawing two penalties. Unfortunately for the guests, Michael Lackey held firm in net and kept Harvard afloat. Late in the period, the Crimson struck. Superstar defenseman Adam Fox found open space in the slot and ripped a shot through Oettinger to tie the game at 1-1 before intermission.

In the dying seconds of the second, Patrick Curry sat for a slashing minor. The power play carried into the beginning moments of the third. As the power play wrapped up, Fox threw a pass to Casey Dornbach. He fired a shot on net that Oettinger saved and Jack Drury tipped. Lewis Zerter-Gossage tracked the rebound and deposited the puck into the net for a 2-1 Crimson lead. That did not stand. Drury’s Team USA World Junior teammate Joel Farabee found space atop the left circle and whipped a shot through Lackey and into the net. The teams skated evenly through an entertaining close of the third and overtime to conclude the night in a 2-2 tie.

BU moves to 6-8-3 on the season. “It was a pretty good hockey game,” said Terrier Head Coach Albie O’Connell. “Harvard played really physical and gave us fits. Our forwards weren’t really used to it. They were squawking a bit at the start. But I think we settled into it as the game wore on. We didn’t have a whole lot of legs. Some guys had skating legs but we didn’t really have game shape.”

Jake Oettinger recorded 26 saves on 28 shots faced and got a secondary assist on Farabee’s goal, his first collegiate point. BU takes to Hockey East play this weekend, hosting New Hampshire on Friday night and visiting Providence on Saturday. Puck drops at Agganis at 7:30 pm and at Schnieder at 7 pm.

Harvard goes to 6-4-3 on the season. “Although we’re never happy not getting two points at home,” Crimson Head Coach Ted Donato mused, “I thought we did some things better than we’ve been doing them. I thought it was a step forward for us.”

Harvard and BU might next play each other on the Beanpot’s second day. On that possible matchup, Donato commented, “When I look at their lineup, 13 of their 19 skaters won the Hockey East championship last year. You’re looking at two of the better defensive corps in all of college hockey here tonight. They’re finding their way, but that’s a hockey good team. They’re very well coached by Albie, Paul Pearl, Eddie, those guys are all excellent coaches. I think they’ll be heard from and a very tough out at the end of the season. I hope we see them on the second Monday of the Beanpot, as long as it’s at the late hour.”

Harvard hits the road for ECAC play with two daunting tasks. They’ll face Princeton and Quinnipiac this weekend. Puck drops at 7 pm both nights at Hobey Baker Rink on Friday night and at the People’s United Center on Saturday night.