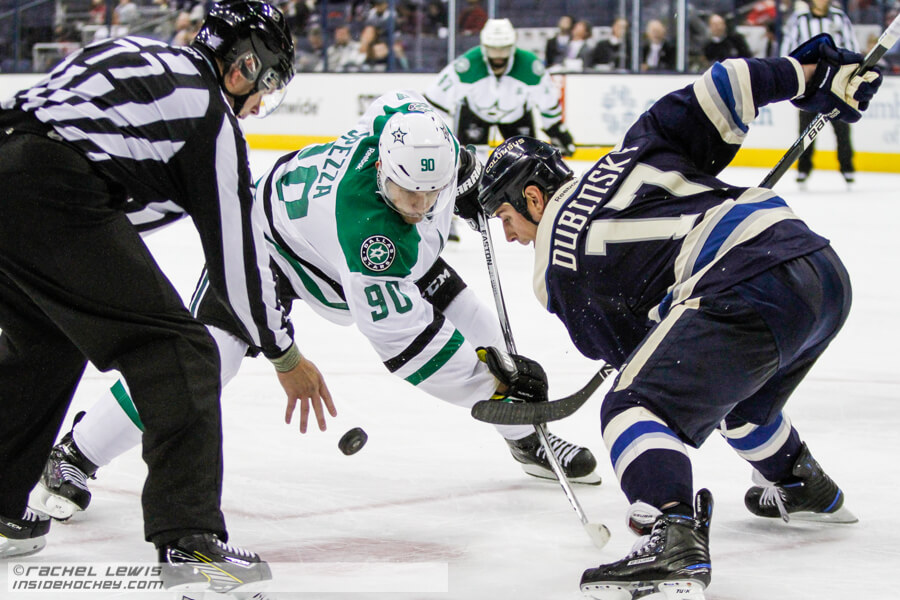 Stars Creating Aggressive Offense, But Bow to Calgary at Home

A year ago today, the Dallas Stars were 19-5-2 en route to the Western Conference championship.

What a difference a year makes.

This year’s squad entered December having faced more than their share of challenges and adversity. The lineup has been decimated by injury. Specifically, they were missing a total of 113 goals through the absences of Jason Spezza, Patrick Sharp, Cody Eakin, newly-acquired Jiri Hudler, Mattias Janmark, and Ales Hemsky. As a result, new faces such as Lauri Korpikoski, Adam Cracknell, and Devin Shore have seen their fair amount of action.

In addition, the defensive corps has undergone a changing of the guard with the recent callup of Esa Lindell and Julias Honka. There has also been some concern over the puck movement and defensive responsibility of Stephen Johns, who was sent to the AHL Texas Stars and recalled two days later. In addition, veteran Johnny Oduya has been lost to injury, and John Klingberg — an outstanding two-way find on the blue line — was a healthy scratch for one game.

Fortunately for the Stars, they were a respectable 10-11-6 for 26 points after dropping a 2-1 verdict to Calgary on Tuesday, Dec. 6 at American Airlines Center. It was the opener to a stretch in which they play nine of their next 12 at home.

The Stars are sixth in the Central Division and 11th in the Western Conference positioned only two points out of the final wild-card spot. Squarely in the midst of the conference, Dallas is 11 points from the top (Chicago) and seven from the bottom (Colorado).

Fortunately, they have not been pointing fingers at each other. Instead, they are coming together as a team in hopes of righting their wrongs. “Negativity breeds negativity, and I think that only makes it harder, first period,” said center Spezza, who has returned to the lineup along with Eakin. “We have to try to breed positive feelings around here.”

However, the Stars seemed to take a step backward against the Flames despite first-period lead when Curtis McKenzie scored for the second straight game off a rush. Despite allowing only 20 shots on goal, Dallas did surrender a number of breakaways, odd-man rushes, and a two-on-zero Calgary charge by former Star Alex Chiasson and Johnny Gaudreau that resulted in the game-tying marker by the latter in the middle period.

“We made mistakes that shouldn’t be made anymore at this time of year,” defenseman Dan Hamhuis said. “We worked so hard to play good defense and give teams nothing in 5-on-5 play. We certainly don’t want to be giving up two-on-zeros and breakaways.”

“I thought (Stars goalie Kari Lehtonen) was great….he gave us a fabulous second period,” coach Lindy Ruff said. “It’s frustrating. I thought we played a pretty solid first period for coming off the road, but the second period we played — at the end of the night, you knew it could probably come back to haunt you, and it came back to haunt us.”

Calgary forward Sean Monahan’s third period power play goal was the difference-maker as Dallas slid to 1-6-3 record following a victory. “It’s on us as players to step up,” Hamhuis said. “We shouldn’t have to have our coach come and yell at us. We’re a veteran team, we should know what it takes as a group to win and what we expect of each other.”

“(Our effort) wasn’t good enough,” said Ruff. “We played a disastrous second period and we should have been down three or four. I think at the end of the night there’s karma and you get what you deserve. We had careless puck play……by our best players.  They’re all involved. If our best players can’t consistently get in there and generate, and score, and finish, we’re going to be up and down like we are. It’s frustrating. I thought we played a pretty solid first period for coming off the road but to play the second period we played, at the end of the night it will probably come back to haunt you. And it came back to haunt us.”

McKenzie noted that the Stars need to “play a full 60 minutes and we haven’t been doing that. (Lehtonen) kept us in the game and he gave us a shot to win in the third, but we were just not playing good enough.

“It’s kind of tiring to win one here and lose one there,” McKenzie added. “It’s not the type of hockey you want to be playing. It’s not as fun in the room. We have to be able to find a way to put it on ourselves to start playing a full game and everything will come from there.”

The Stars, who lost Honka for the last seven minutes of the game with an upper body injury, were coming off three straight games of solid aggressive offensive play and puck possession success.

The Stars were victorious in the finale of their four-game road trip with an outstanding 3-0 whitewash of host Colorado on Dec. 3. Lehtonen stopped 23 shots for his first shutout of the season and 35th of his career.

Dallas finished the 1-2-1 swing in style as Tyler Seguin connected on a power play one-timer for the second straight night to go with an assist. Seguin’s reawakening from an 11-game goal drought was definitely good news for the Stars, whose high-energy offense is on course to put the squad on more than 300 power plays this season.

McKenzie and Patrick Eaves also scored. A healthy scratch for six of the previous seven games, McKenzie reentered the lineup when Sharp went back on IR, launching three shots on goal and driving hard to the net for his red light. “I really liked that line,” Ruff said of the trio of McKenzie,  Shore and Cracknell. “They got it deep, they got pucks to the net, and they crashed the net.”

“It was just a smart hockey game,” Lehtonen said. “We were not trying anything stupid when it wasn’t there. And then when we had something, we tried to make a play. That was very good for a change. It’s been a wild ride here, and hopefully this is a step in the right direction and we can build on it.”

The win gave the Stars some defensive confidence after they entered the game with the worst goals against average per game in the league (3.40) and the worst goal differential (-22).

Ruff said he was pleased with his club’s effort in each of the last two games – losses at Detroit and at Pittsburgh. “Tonight (vs. the Avs) I liked all three periods and we finally got rewarded,” he noted. ”It was good to see us play that well away from the puck. (We had) attention to detail and we were able to maintain that for three periods.

“From start to finish, I thought we played the game the right way,” added Ruff. “We got the lead and continued to play the game the right way, which was real important. We didn’t give up any big plays, and we got a big power play goal. I liked all three periods, and we were finally rewarded. It was good to see us play that well away from the puck.”

Earlier in the road trip, they needed young blueliner Jamie Oleksiak’s second goal of the game with :50 left to salvage a point in a 3-2 overtime loss in St. Louis on Nov. 28.

Klingberg, regarded as one of the key pieces on this team, was healthy but in street clothes during a 3-1 loss to Detroit one night later. “(Klingberg) has had a struggle,” said Stars coach Lindy Ruff. “He’s really been up and down this year. It’s not because of his (effort), because sometimes he tries to do too much. His work ethic inside the game, for me, is always tremendous. It’s just sometimes the risk he puts in the game at different times (is dangerous). Even (at St. Louis), he gave up an unbelievable two-one-one (break) with five minutes left that probably would have eliminated us from coming back in the game. Those are the type of risk situations he has to eliminate from his game.”

The Stars employed that style in Detroit where they outshot the Red Wings 35-20, and in a 6-2 loss in Pittsburgh two nights later on Dec. 1. Dallas trailed the defending Stanley Cup champs 3-2 late in the third period and was pressing for the tying marker when the Pens scored three times in the final four minutes.

“It was a better effort the last couple of games (at Detroit and Pittsburgh),” said forward Brett Ritchie, who registered five shots at Penguin goalie Marc-Andre Fleury. “It’s weird to say that because we haven’t even got a point, but I think we’re trending upward. Obviously, that’s the type of team we have to be. We have to be quick, we have to generate a lot of chances. Last year, we were the highest scoring team in the league, so we have that capability. If you look at the good teams, they’re aggressive. That’s how (Pittsburgh) won last year. They didn’t win by sitting back. A good offense is a good defense. We can learn from teams like that.”

“We had three or four great opportunities just before that to tie the game,” Ruff said. “You can (visualize) the chances we had, the Ritchie chance, Johns, Eakin off the post. But we can’t sit here and talk about the chance. We’ve now had four or five games where (we’ve struggled) to get to get it in the back of the net.”