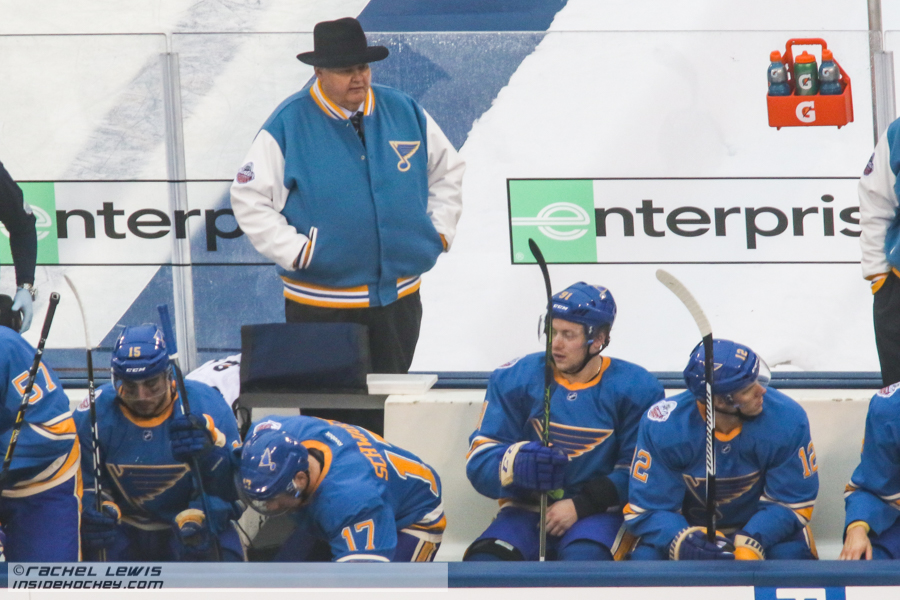 The firing of Ken Hitchcock as head coach of the St. Louis Blues was a sad and ignominious end for what was one of the greatest coaching careers in NHL history. This was supposed to be Ken Hitchcock’s farewell to the NHL; a final sentimental seasonal run to cap a glorious career that lasted 20 seasons and saw Hitchcock’s name occupy the top ten ranks in nearly all the key coaching categories that define a great coach.

But after all the tears are shed one is not surprised though at the sudden death ending for Ken Hitchcock. Yes, the firing was a shock but it was not surprise. The Blues have been in freefall since December 1, going 11-14-2 with their once vaunted defense now ranking 25th in the NHL. Whereas once they were vied for the top of the Central Division now they are the ninth seed in the Western Conference playoff stakes. The fact that Blues GM Scott Armstrong would pull the trigger on Ken Hitchcock with 32 games left in the season is indicative of a major crisis and Scott Armstrong alluded to it in his announcement of Hitchcock’s firing.

He will certainly be elected to the Hockey Hall of Fame as a builder (there shouldn’t be any debate or delay on that issue). He got great results from the Dallas Stars, the Philadelphia Flyers, and the St. Louis Blues before the end came.

The question left hanging though is whether Mike Yeo can turn the team around and reignite the team’s inner celestial fires. Mike Yeo’s previous NHL head coaching experience had been with the Minnesota Wild and that ended the same way that Ken Hitchcock’s tenure had ended: the Wild asleep in the Gurdjieffian sense; switched off; and lacking in spiritual fire. Is Mike Yeo truly the right man to do this? Or is Mike Yeo reflective of a greater malaise that is affecting the Blues as a whole? Scott Armstrong accepted his share of the blame when he announced Ken Hitchcock’s firing. One wonders if Mike Yeo cannot stop the slide then were there be even more firings within the Blues at perhaps all levels of the team? Will Scott Armstrong (who has never managed a team to the Stanley Cup finals) be the next person to have his head placed in the guillotine?

Will there be a night of the long knives on April 10, 2017 (the day after the regular season ends)?