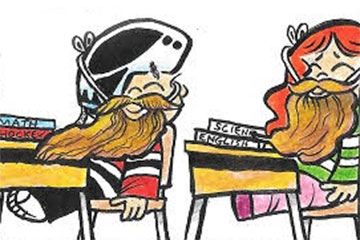 Hope you all had a great week.

You just never know who will show up in a Small Saves cartoon. Many of the characters are inspired from people in my life. I’d like to dedicate this week’s comic to Mrs. Reardon. I met her where I work as a custodian at a senior center. She is a former schoolteacher who has helped me greatly with website links and personal advice on returning to college (I have my A.S. but want to go back part-time to obtain a B.A.). She’s a huge hockey fan and can rattle off the names of the former NHL’s better than I can! In this cartoon, she is the teacher holding the coffee cup, praising the spirit of playoff hockey. Thank you for all your help, Mrs. Reardon.

This week I would like to say thank you to Inside Hockey for featuring Small Saves on their website. Inside Hockey was one of the very first hockey media sites to welcome Small Saves, and they have been featuring him ever since. A few years back they had a spectacular Fantasy Guide magazine and they graciously invited Small Saves to appear in it. I want to thank everyone associated with their online publication. With the Bruins going up against the Blues, this is one of sites you’ll want to visit for all the latest hockey news.

A tip of the mask to Inside Hockey!

Small Saves’ “Item of the Week”

Small Saves, the little youth hockey goalie, is having an off night in goal. When the buzzer sounds, he goes straight to the locker room. There, he broods… even long after everyone else is gone. While deep in thought, a gentle fog beckons him back onto the ice. Skating alone around the rink, he states that nobody knows what it’s like to be a goalie. From out of the darkness, on this fateful night, comes a reply… teaching the little puckstopper what it truly means to be a goaltender. Small Saves stars in his very first storybook. From goalies to hockey players and fans of the game, “The Goaltenders’ Creed” is a great addition to your hockey library!

You know when they say, “Until you try, you will never know?” Well, as everyone knows, I’m always showing Small Saves around to various media sites. Back in 2001, Small Saves was the cartoon for NHL.com. It’s been a while, and I figured I’d call to get (hopefully) a contact name to submit Small Saves to their media division. So, I called. The receptionist was very nice. I have to say; hockey is the sport where everyone is so approachable and friendly. I introduced myself and what I was inquiring about. She said. “Oh, you want the V.P. of NHL Communications. I’ll get him for you.” Well, if anyone is familiar with Jackie Gleason’s “Ralph Kramden” when he’s at a loss for words, well… that was me! Here’s a quick clip for those who have not seen “The Honymooners.” As that was surely me! https://www.youtube.com/watch?v=wK9odsWwfIo

So, to make a long story short, he answers. I introduce myself and why I’m calling. “Yeah, let’s take a look at it.” He says! So, I’m writing the second draft proposal letter, along with various Small Saves material. He gave me his mailing address and was genuinely helpful.

Now, they can say “thank you”, but pass… but they could also say “yes.” I’ll give my very best. I’ll update everyone with any news, either way.

And as Mr. Gleason would say… “And away we gooooo!”

Have a great week, everyone!