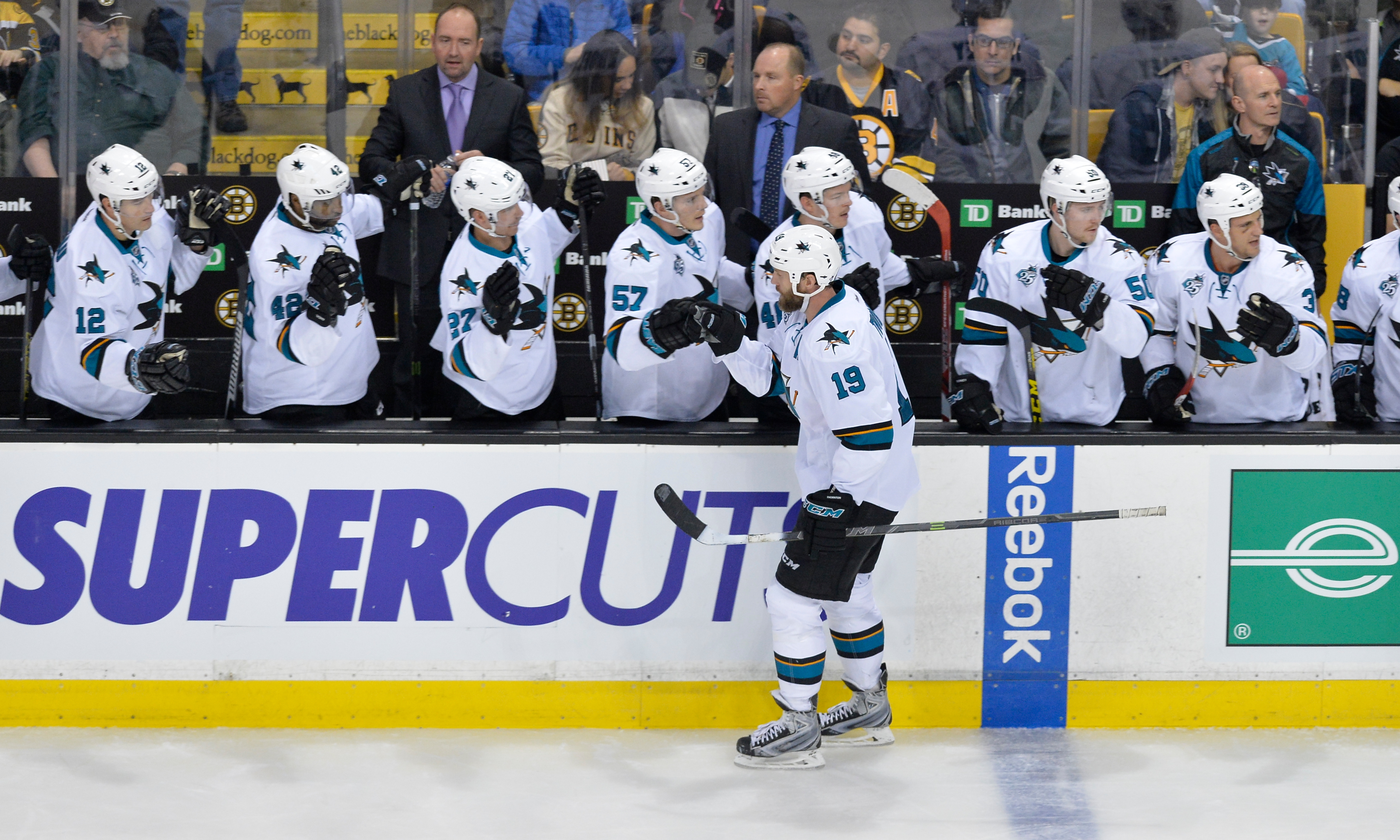 Sleeping on the Sharks Without Pavelski Is a Bad Idea

Sharks territory will look quite different in 2019-20. Gone from the 2018-19 roster this offseason are Joe Pavelski, Justin Braun, Joonas Donskoi, Gustav Nyquist and Joakim Ryan. Despite General Manager Doug Wilson re-signing Erik Karlsson, who was set to become an unrestricted free agent, and re-upping restricted free agents Timo Meier and Kevin Labanc to team-friendly contracts, a significant portion of the Sharks fan base on social media has been focusing solely on the key departures.

If you ask this writer though, Sharks fans have plenty of reasons to be optimistic about 2019-20.

Losing Pavelski hurts, there is no doubt about it. The goal scoring, the work ethic, the faceoffs, the leadership, it will all be missed. Sharks fans didn’t just call him Captain America because he was their captain and is from Wisconsin. Pavelski was also the captain of Team USA at the World Cup of Hockey in 2016. Of all the American players at the time, he was the one chosen to wear the C.

However, the idea that the Sharks have lost so much scoring that they will be significantly weaker in 2019-20 is simply untrue. The Sharks tied for second in the league in goals last season with 289. Even if one removes ALL 38 goals Pavelski scored from that total, the leftover 251 mark would still have had the Sharks good enough for 12th in the league. Of course, it’s not realistic to suggest Pavelski’s replacement would score zero goals. At that amount of ice time, even an underperforming young player likely scores about a dozen goals. Therefore, had the Sharks used a replacement level player in Pavelski’s role last season, they would have been at least 9th overall in scoring.

Yes, Pavelski and Nyquist are now gone, but that still leaves eight scorers of 50 or more points returning this season. Last year no other team had more than four. Think about that for a minute. Sharks still have double the amount of high-end scorers than any other team from last year.

Admittedly the Sharks’ bottom-six scoring has taken a hit (on paper at least) with the loss of three skilled forwards. But they still boast plenty of high-end scorers and despite trading away first-round picks in the Kane and Karlsson trades, the Sharks have a handful of interesting young forward prospects in Dylan Gambrell, Joachim Blichfield, Ivan Chekhovich, and Sasha Chmelevski.

Furthermore, the Sharks were arguably the scariest team in the league last season in the middle of the year when they went on a 15-3-1 run from Dec. 2 through Jan. 15. That was all prior to Nyquist’s arrival. The key cog in that run was Karlsson, who perhaps not so coincidentally took off during this stretch starting the day after his return to Ottawa on Dec.1. Karlsson racked up 26 points during this 19-game surge, including a franchise-record 13-game point streak for a defenseman.

Did Karlsson have some unfortunate injury issues with the groin? Certainly, but he was a huge part of the team’s regular season and postseason (16 points in 19 games) success. Given the strong likelihood of a healthier season in 2019-20, (Karlsson had previously played in 70+ games in each of the previous five seasons before 2018-19, including three-straight 82-game seasons), it is fair to expect a player of his caliber at 29-years old to put up a monster year of 80-plus points.

Unlike last year, Karlsson will not have to go through the same adjustment period of learning a bunch of new teammates for the first time in 10 years. In fact, outside of one top-9 forward here and maybe a fourth line forward there, the Sharks will not be integrating any new major pieces into their lineup this season. The familiarity will be as strong as any team in the league to start the season.

Pavelski will be gone, but the Sharks will have Karlsson and Burns feeding pucks to an elite group of forwards. The San Jose offensive attack will give every opposing coach fits. In fact, without Pavelski, the Sharks will probably play a bit more uptempo and rely less on the point shot from Burns for tips and redirections. By subtracting Pavelski, the Sharks’ top lines get faster. Powering the offense through Couture/Meier and Hertl/Kane in the slot area, rather than an over reliance on the Burns/Pavelski point-and-tip-shot combination ought to make the Sharks less predictable.

Defensively speaking, the Sharks will likely see a natural improvement upon their bottom-third goals against numbers for a multitude of reasons. A year ago the Sharks began the season with Karlsson and Marc-Edouard Vlasic paired together for about 10 games. The chemistry wasn’t immediate and San Jose quickly switched back to the old reliable shut-down pair of Vlasic and Braun. Problem was that duo was no longer the same old reliable pair. Their massive struggles weren’t all that surprising though. The Vlasic-Braun duo had logged many difficult miles over the years and their possession numbers had seen a steady decline since 2015-16 when they shut down the likes of Anze Kopitar, Tyler Toffoli, Filip Forsberg, Vladimir Tarasenko and Sidney Crosby in the playoffs.

Vlasic had a much stronger second half in 2018-19 playing more minutes away from Braun. Furthermore, the middle portion of the season is when the relatively unknown Radim Simek established himself as a steady, physical presence to play on the left side of Burns on the second pair. Simek came on strong once he cracked the lineup, hit the proverbial wall a bit, but then was playing solid defense again for a few weeks before suffering a season-ending knee injury in March. Think about it, the Sharks somehow managed to survive the Vegas series without their top-two defensive defensemen for 2.5 games of that series and goaltender Martin Jones being unable to stop a beach ball.

Speaking of Jones, the Sharks’ goaltender had a miserable season last year with an .896 save percentage. His career save percentage though is .912. He was down right terrible last year and yet San Jose still was as dominant as they were for large stretches of the season and finished in the final four. There is certainly bound to be some regression to the mean for Jones, so even without upgrading their goaltending personnel, the Sharks will almost assuredly have at least slightly better goaltending next season.

As for the concerns about Burns and Karlsson being too aggressive and giving up odd-man rushes against like they did last season? Again, just like the case with Jones being bad, the Sharks gave up too many odd mans last year and yet were still just two wins away from the Stanley Cup final. You can be assured that not giving up easy goals on breakaways and two-on-ones will be a focal point of the team during Training Camp. And with the return of Assistant Coach Bob Boughner to the staff after a two-year hiatus as Head Coach of the Panthers, Sharks fans should be confident that the defense will be much more cautious and responsible this upcoming season, even Burns and Karlsson.

When Boughner was previously with the Sharks, he was the one that got Burns’ overall game to its highest level. With Boughner in his ear, Burns was a lot less free-wheeling and risky with the puck, yet still racked up the point totals.

Between the forwards, defense and goaltending, the Sharks’ overall team defense will certainly be better in 2019-20.

Every year fans around the league want to shut the door on the Sharks’ Stanley Cup window. However, Wilson keeps managing to acquire top-end talent in trades (Kane, Karlsson) and young guys keep developing nicely, (Meier, Hertl, Labanc, Simek). For as long as Thornton continues to be an effective third-line center, the Sharks’ window might remain open for a couple more years yet.