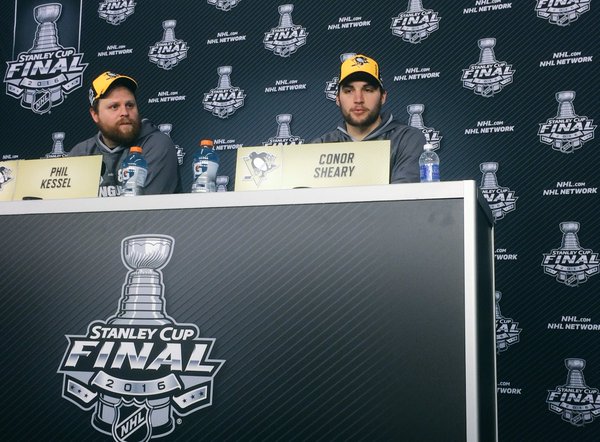 Conor Sheary scored 2:35 into overtime to lift the Pittsburgh Penguins past the San Jose Sharks 2-1 in Game 2 at Consol Energy Center on Wednesday night.

Game 2 meant the Sharks had a chance to split the series before heading back to San Jose, however, Team Teal missed out on a lot of opportunities throughout the game.

The Penguins used their speed to limit San Jose’s chances. They held the Sharks to six shots on goal in a scoreless first period.

Tomas Hertl hit three posts — two in the first period and one in the second.

Hertl had a chance to give the Sharks a 1-0 lead early in the second when he stripped Nick Bonino behind the net and fell while wrapping a shot around Penguins goalie Matt Murray that hit off the left post at 4:10.

The Sharks went 11:06 without a shot in the second period until Brent Burns put a wrist shot on Matt Murray with 1:08 left.

The Penguins scored first on a goal set up by a San Jose turnover. Phil Kessel took a pass from Nick Bonino and tipped the puck behind Martin Jones to give the Penguins a 1-0 lead at 8:20.

Carl Hagelin came close to extending the Penguins’ lead to 2-0 when on a 2-on-1 with Kessel late in the second. Hagelin kept the puck and his shot went off Jones and then hit the crossbar with 4:41 left.

The Penguins outshot the Sharks 23-11 and led 1-0 after two periods.

Sharks forward Chris Tierney almost tied the game when he shot off the crossbar 4:07 into the third.

Joonas Donskoi had a great chance to win the game late in the third period, but his shot bounced off Murray.

The contest was extended to overtime, courtesy of Braun’s game-tying goal with 4:05 left in regulation.

The overtime was over quickly. Conor Sheary scored on a wrist shot from the deep slot at the 2:35 mark to give the Penguins a 2-1 win over the Sharks in Game 2. Matt Murray made 21 saves for Pittsburgh, while Martin Jones made 28 saves for San Jose.

The Penguins lead the best-of-seven series 2-0.

Penguins rookie forward Bryan Rust (upper body) played after being injured in the third period of Game 1, which Pittsburgh won 3-2.