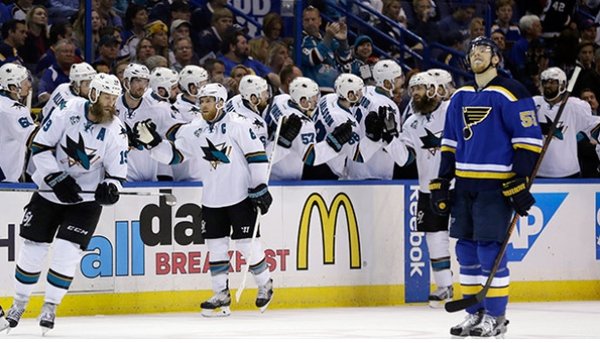 The Sharks have had a penchant for bouncing back after losses throughout the Stanley Cup Playoffs. They won Games 4 and 5 in the first round against the Los Angeles Kings after dropping Game 3 with a 2-1 loss in overtime. In the second round against the Nashville Predators, they lost Game 4 and Game 6 in overtime, but came back to win the next game each time.

“It’s an opportunity for us individually and as a team to go out and play the way we expect ourselves to play,” Sharks center Logan Couture told NHL.com correspondent Louie Korac. “We’re going to need to be better and I’m sure they’re going to want to bring the same game they had in Game 4. It’s up to us to match it and be better than them.”

The beginning was one-sided, as the Blues had three shots on goal to start the first period, but the Sharks struck first. Marc-Edouard Vlasic’s slap shot from the blue line beat Jake Allen through a screen at a fast pace. San Jose jumped out to a 1-0 lead at 3:51. Joe Pavelski and Joe Thornton collected the assists on Vlasic’s first goal of the playoffs.

But the lead was short-lived. Blues left wing Jaden Schwartz collected the blocked shot and fired the puck past Sharks goalie Martin Jones to tie the contest 1-1 at 7:04.

The Blues took a 2-1 lead at 15:08 courtesy of Troy Brouwer’s rebound goal. Brouwer flaunted his hand-eye coordination by hitting the puck out of midair on the rebound. Sharks goalie Martin Jones was aggressive on the initial shot, but appeared to have no idea where the puck was located.

Tommy Wingels took a huge hit from Alex Pietrangelo to end the first period. This incident had many players riled up, especially Brenden Dillon. The referees intervened to prevent a potential fight from happening.

Kevin Shattenkirk and Tommy Wingels dropped the gloves at 2:38 of the second period. Shatternkirk received an extra 2:00 for roughing, which gave the Sharks the man advantage. Vlasic rang his shot off the post, but Joel Ward tipped in the rebound out of midair on the power play to tie the contest 2-2 at 4:37.

Roman Polak was sent off after dropping the gloves with Dmitrij Jaskin at 11:01. The Blues went on the power play and Robby Fabbri scored on the man advantage for a 3-2 lead at 11:58. Fabbri hammered a slap shot under the pad of Martin Jones for his fourth goal of the playoffs.

Shattenkirk was called for hooking Tomas Hertl at 17:08. Joe Thornton set up Joe Pavelski in the slot on the power play. Pavelski finished Thornton’s pass and buried home the rolling puck on a one-timer to tie the contest 3-3 at 18:33.

The contest was tied 3-3 after 40 minutes. The Sharks were outshooting the Blues 18-14.

Just 16 seconds into the third period, Joe Pavelski reached out for a beautiful deflection past Allen to give the Sharks a 4-3 lead on his second goal of the game and 12th goal of the playoffs.

Some fans wanted to press the panic button, but Chris Tierney scored a wraparound goal into the empty net with 53.9 seconds left. The Sharks took a 5-3 lead on Tierney’s fifth goal of the playoffs.

Joel Ward wristed a shot from center ice into the empty net for his second goal of the game and fourth goal of the playoffs. Ward’s unassisted goal expanded the Sharks’ lead to 6-3 with 33 seconds left.

The Sharks silenced the Blues 6-3 in Game 5. Martin Jones made 18 saves for San Jose. Jake Allen made 21 saves for St. Louis.

Special teams played a factor in Game 5. The Sharks went 2-for-3 on the power play while the Blues went 1-for-3.

Now they’re just one win away from their first trip to the Stanley Cup Finals.