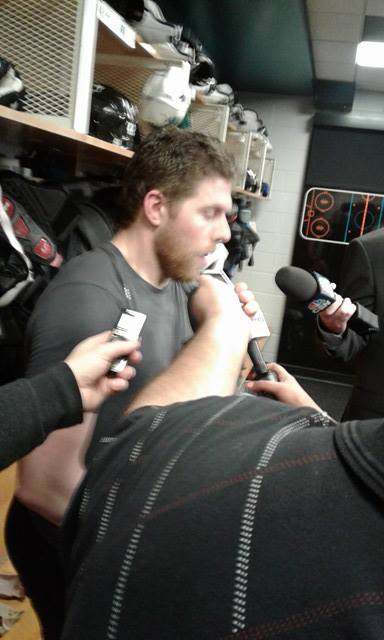 Sharks Fall to Panthers 6-5 in Overtime

Despite a valiant comeback, the San Jose Sharks wound up losing 6-5 to the Florida Panthers in overtime in a nationally televised game at SAP Center.

The Panthers got off to a strong start, capitalizing on their second two-on-one for a 1-0 lead at 15:40. Reilly Smith sent a great pass to Jussi Jokinen, who scored on a virtual lay-up for his eighth goal of the season.

Just 31 seconds later, the Sharks tied the score 1-1 as Brent Burns picked up a pass from Joe Pavelski and fired a long-range wrist shot into the net to beat Roberto Luongo for his 25th goal of the season.

“We (Sharks) had a very nice start,” Burns said. “It’s one of those things that we go through on a regular basis, but you gotta be your best every night. There are teams that are fighting for their lives.”

However, the 1-1 tie was short-lived. The Panthers responded with two unanswered goals in a span of 107 seconds to snatch a 3-1 lead over the Sharks. Nick Bjugstad picked up a pass from Aaron Ekblad for his third goal of the season at 14:25. Then, Keith Yandle set up Aleksander Barkov, who one-timed the slap shot for his 12th goal of the season at 12:48.

The Sharks made it a one-goal game with 4:35 left in the period as Joel Ward stuffed the puck through traffic for his seventh of the season.

Despite outshooting the Panthers 10-6, the Sharks trailed 3-2 after 20 minutes.

The Sharks tied the score 3-3 at 6:07 of the second period. Marc-Edouard Vlasic collected a pass from Kevin Labanc and blasted a shot past Luongo for his fourth goal of the season.

The fans booed when Luongo poked away Joe Pavelski’s penalty shot at 9:29.

The suspense continued late in the period. Joe Thornton made a sweet play to Vlasic, who tried to net his second goal of the game, but Luongo made a huge save to prevent the Sharks from retaking the lead.

The Sharks outshot the Panthers 24-9, but the score remained in a 3-3 deadlock after 40 minutes.

A couple of defensive lapses initially affected the Sharks as the Panthers took a 5-3 lead in the first half of the final period, but they eventually tied the score 5-5 in the second half.

Bjugstad scored his second of the game and fourth of the season just 2:15 into the period. Bjugstad skated down the slot and swept in a one-timer past Martin Jones to put his team ahead 4-3.

Barkov followed with his second of the game and 13th of the season at 7:19 to extend the Panthers’ lead to 5-3. Barkov collected a pass from Jaromir Jagr. His shot was initially saved by Jones, but he managed to beat the Sharks’ goalie short-side the second time around.

The Sharks staged a down-to-the-wire comeback as Joe Pavelski scored two goals late in the period. Pavelski made it a one-goal game with 2:21 left in regulation after his backhand at the top of the net deflected in and off the stick of Michael Matheson for his 19th of the season.

Pavelski fired a shot off the post that beat Luongo, scoring the game-tying goal — his 20th of the season — with just 22 seconds left.

After a 5-5 deadlock, the game headed into overtime. Barkov set up the play by sliding a no-look pass to Jonathan Huberdeau, who shoved the puck into the net for the game-winning goal — his third of the season — to lift the Panthers to a 6-5 overtime win over the Sharks.

“They (Panthers) made some good plays,” Jones said. “Obviously you don’t want to be tired, but sometimes, it happens.”

Luongo finished with 29 saves on 34 shots before exiting the game. James Reimer made two saves in relief of Luongo.

“We didn’t give up a lot of shots,” Sharks head coach Peter DeBoer said. “But we gave up a lot of Grade-A opportunities, which is a little uncharacteristic…Our biggest error tonight was not taking advantage of a number of chances.”

The Sharks recalled Timo Meier, Nikolay Goldobin and Tim Heed from the Barracuda Wednesday morning. They also held a pregame ceremony prior to the puck drop to celebrate Patrick Marleau’s 500th NHL goal.

Jagr turned 45 on Wednesday. With his assist on Barkov’s second goal of the game, Jagr picked up his 1,900th career point.

The Sharks announced a sellout crowd of 17,562.