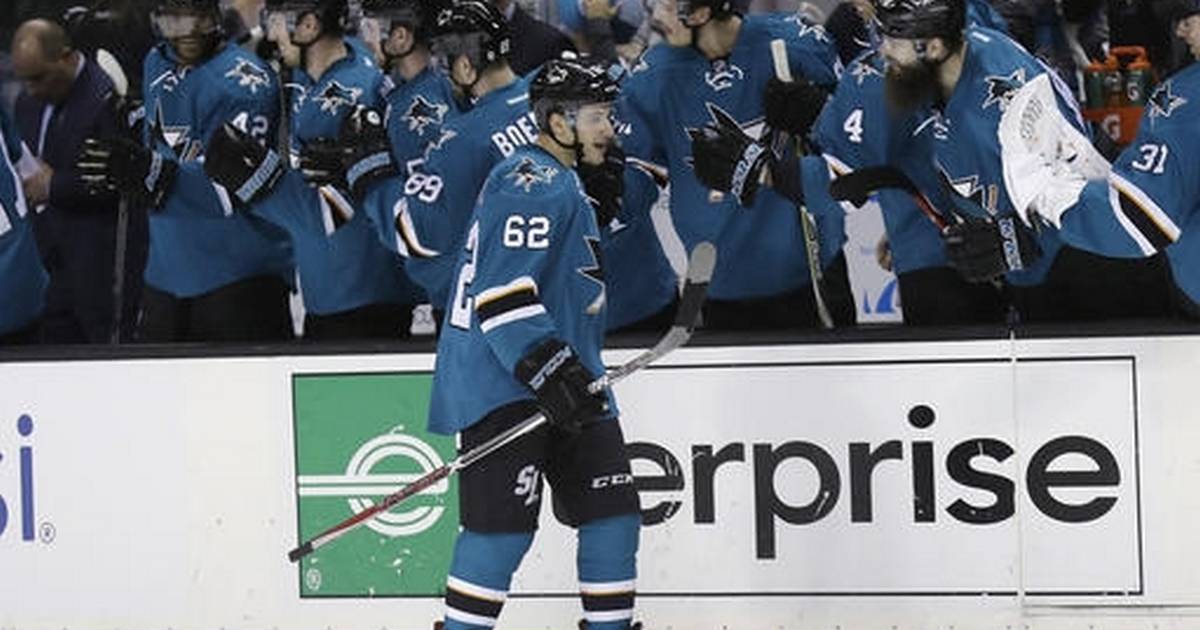 Sharks Escape with 4-3 Win over Hurricanes

The San Jose Sharks snapped a two-game losing streak with a 4-3 win over the Carolina Hurricanes at SAP Center on Saturday night.

The Sharks lost back-to-back games, 4-2 to the Ottawa Senators on Wednesday at home and 3-2 at the Anaheim Ducks on Friday. San Jose put backup goalie Aaron Dell in net as an attempt to avoid a third straight loss. Thus, Dell made his fourth start of the season.

Michael Haley was a late scratch prior to the puck drop. Matt Nieto filled in for Haley, and as a result, Nieto received an opportunity to record additional ice time.

The Sharks sported their specialty orange jerseys during warm ups as they hosted the Hurricanes on San Francisco Giants night. Giants pitching coach Dave Righetti was welcomed with a warm round of applause as he came out to drop the ceremonial first puck.

Just 12 seconds into the first period, the Sharks jumped out to a 1-0 lead, as Patrick Marleau took a pass from Joe Thornton and fired the puck into the net for his seventh goal of the season. Joe Thornton picked up his 15th assist of the season on Marleau’s quick goal.

The Hurricanes tied the contest 1-1 at 1:59 after Lee Stempniak one-timed a pass from Teuvo Teravainen for his fifth goal of the season.

Paul Martin scored his first goal of the season to put the Sharks up 2-1 at 3:14. Martin’s shot from the point deflected off a Hurricanes defender’s right leg and went past goalie Cam Ward.

Dell made a notable glove save to prevent a potential goal by Stempniak with a little less than six minutes left in the first.

The Hurricanes had a 11-10 shot advantage, but the Sharks led 2-1 after the first.

Following a Derek Ryan slashing penalty, San Jose went on their first power play of the night, only to see the Hurricanes get even. Joakim Nordstrom’s short-handed goal tied the contest 2-2 at 11:02 of the second.

Logan Couture tipped in a shot from Brent Burns past Ward, but the officials decided to review the play due to a possible high stick. Turns out, the call on the ice stood. The Sharks went ahead 3-2 at 12:18.

Labanc buried the rebound off of Dylan DeMelo’s point shot to double the Sharks’ lead at 14:10 with his fourth goal of the season.

The Sharks led 4-2 despite being outshot by the Hurricanes 22-14 in the second.

A costly penalty affected the Sharks in the third period. Brenden Dillon was called for cross checking at 3:27. The Hurricanes capitalized on the man advantage just 15 seconds later. Ryan was all alone in front of the net, which allowed him to put the puck past Dell five-hole to pull Carolina within a goal.

However, the Hurricanes’ comeback effort fell short, and the Sharks took a 4-3 win at home.

Dell finished with 30 saves in a San Jose victory. Ward made 16 saves in a losing effort for Carolina.

After the game, I spoke to Labanc. He told me that his scoring surge in back-to-back games was a confidence booster. However, Labanc is still a rookie who remains a work in progress.

“My details of the game,” Labanc responded when I asked him what he has improved the most on as a rookie. “Being good defensively on my own end. Making sure that I’m hard on the puck and getting pucks out of my own end.”

“I didn’t have any shots,” Labanc added. “So I’ll have to make sure that I’ll create chances off shots as well.”

“We got some good contributions,” DeBoer said. “Three games in four nights against the teams that would give us a hard time.”

Up Next
The Sharks will kick off a four-game road trip starting Tuesday against the Toronto Maple Leafs at 7:30 p.m. EST on CSN-CA and TSN4.