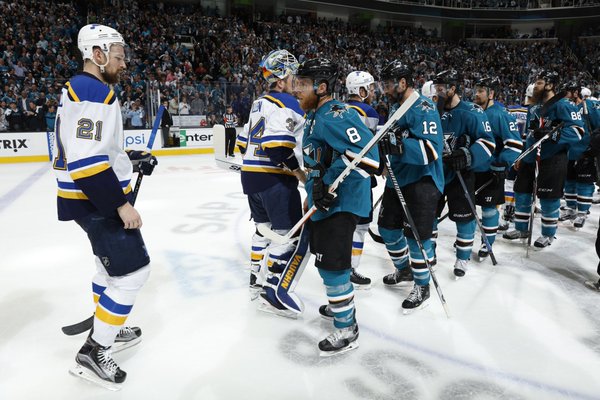 Sharks-Blues: Why San Jose Will Win in 5

The San Jose Sharks and St. Louis Blues are set to face off yet again in the Western Conference final, a rematch of the 2016 final-four matchup. If you are a Sharks fan who listened to the post-game show on 98.5 KFOX after Game 7, you heard the San Jose broadcasters lauding the Blues as a third different type of beast for the Sharks to face in these playoffs. If you ask this writer though, St. Louis is a terrific matchup for the Sharks, a far better one than either Vegas or Colorado.

Three years ago the Sharks beat the Blues in six games, this time they will beat them in five.

Even with the big name forwards that St. Louis has added since 2016 in Ryan O’Reilly, Brayden Schenn and David Perron, the Blues finished the season with just three 50-point scorers. O’Reilly finished with 77, Vladimir Tarasenko 68 and Schenn with 54. For argument’s sake you can add Perron’s 46 into that list since he only played 57 games. So that’s four 50-point guys.

San Jose meanwhile finished this season with nine 50-point guys. And that’s not even including Erik Karlsson who finished with 45 while injuries limited him to just 53 games. Since we added Perron to the Blues list, it’s only fair we add Karlsson to the Sharks list. Therefore that is 10 Sharks players of the 50-plus-point variety to just four for the Blues. That’s a significant advantage.

With all those scorers, Team Teal finished tied second in the league this season in goals per game with 3.52. St. Louis finished 15th at 2.98. That’s a half a goal difference. Even if we adjust for the Blues’ strong second half, it’s still a stark contrast. From January onward the Blues averaged a slightly better mark at 3.15. San Jose meanwhile averaged an even better 3.63 goals per game. Still a half goal difference.

But wait, wait, wait Andrew, the difference in the Blues season in the second half was all about Jordan Binnington between the pipes! Well sure, the Blues allowed an extremely stingy 2.17 goals against since January. San Jose meanwhile was ugly all season as their goaltending struggled throughout. The Sharks allowed 3.21 goals against per game in the second half. That’s an entire goal more! Do the math, one full goal of defense is better than a half goal more of offense!

Unfortunately for Blues fans, there is quite the mountain of evidence now that Martin Jones can flip the switch come playoff time. While this narrative of “playoff Jones” appeared to be debunked in the middle of the first round against Vegas, all of a sudden in Game 5 the flip switched.

For the playoffs on the whole, Jones is sporting a .910 save percentage, just .005 behind Binnington’s .915. However, since the start of Game 5 against Vegas, Jones has produced an tremendous .928 save percentage.

The Sharks simply haven’t been allowing the same amount of goals against as they were in the regular season and they are still scoring at a really good clip. Over their last 10 playoff games the Sharks are averaging 3.2 goals per game. They are allowing 2.5 against over that span.

Binnington will have to be lights out if the Blues want to beat San Jose. That’s going to be a tough ask though considering Colorado’s Philipp Grubauer was phenomenal between the pipes with a .925 playoff save percentage, and even with that, he still couldn’t stop the Sharks.

Now St. Louis does have some nice young talent that wasn’t in the mix back in 2016. Nineteen-year-old Robert Thomas had the key assist in double overtime to beat Dallas in Game 7 of the previous round. Then there is 22-year-old defenseman Vince Dunn who in his second full season improved upon his solid rookie year campaign. Dunn finished with 24 points and a plus-1 rating in 2017-18 and this year he ended with 35 points and a plus-14 rating.

That’s all well in good, and the Sharks don’t have key figures in Patrick Marleau, Joel Ward nor Paul Martin from that 2016 team. However, they now have young stars in 22-year-old Timo Meier and 23-year-old Kevin Labanc, two of those 50-point guys mentioned earlier. Two of the 10 that the Sharks boast on their roster.

As also mentioned earlier, this is indeed a better matchup for the Sharks than either Colorado or Vegas. While Vegas is much more physical than Colorado, both play an extremely high-tempo speed game. The Knights have always been a thorn in the Sharks side during their first two years in existence. Colorado’s speed, err should I say Nathan Mackinnon’s speed gave the Sharks all they could handle. Yet when push came to shove, the Sharks were able to contain Mackinnon just enough thanks to Marc-Edouard Vlasic, the best shutdown defenseman in the NHL.

St. Louis meanwhile is a bigger, heavier, grind it out team, much like the Sharks. And San Jose loves to play that game. Both Meier, and first-round series hero Tomas Hertl are absolute bulls. They are beasts down behind the goal line. Same can be said for 39-year-old Joe Thornton and last season’s newcomer Evander Kane.

The Blues play the game the Sharks love to play and the Sharks are simply better at it. They have more offensive weapons and have already beaten two really good goaltenders in Grubauer and Marc-Andre Fleury in the playoffs. Plus Martin Jones is in full-on Martin Jones playoff mode.

(For the record, the Sharks won two out of the three games between the two teams this season.)

Once again, Sharks in five.