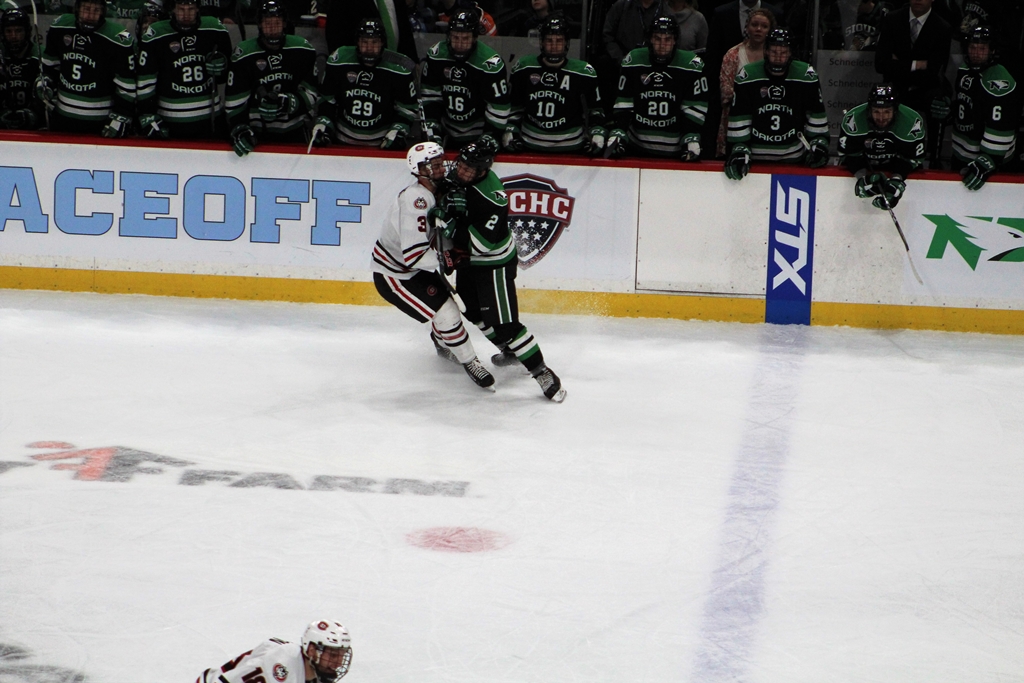 SCSU Pushes UND to the Brink with 3-2 Win

St. Paul, MN – The Beauty of the College hockey is the finality of the conference and NCAA playoffs. There’s very little room for error. Lose and you go home. That makes the games more intense and entertaining. Since the inception of the National Collegiate Hockey Conference, the conference championship has been intense. Every game has been a battle, a war. That makes the action even better.

This season, University of North Dakota hockey fans are in unfamiliar territory, their favorite team has qualified for the NCAA tourney 15 years in a row. Baring a divine intervention, that streak is going to come to an end this weekend. To have any chance, UND has to win tomorrow and hope for help.

“I think there are some games in progress, right now,” head coach Brad Berry said. “But again, we came down here to win two games. That’s not going to happen right now. We have to concentrate on winning and plan on getting some help around the nation. Just like Nick (Jones) said, we have to control what we can control. Tomorrow we have to control winning one game. From there we’re going to need some help from around the league.

“Like I’ve said before, it’s been one of those years where you scratch and claw and you go right to the 11th hour and you trying to get where you want to go. And we’ve done that for a couple of things. We need to do that tomorrow. The focus tomorrow afternoon is to win one game.”

While it sounds cliché, North Dakota has finally run out of house money. The Fighting Hawks have flatlined and the doctor is ready to pronounce them dead.

The clock is ticking – there is no tomorrow. The Hawks had one task,  they needed to beat the Huskies, and advance to the championship game of the Frozen Faceoff. Obviously, that didn’t happen and there’s a good chance their season is over after tomorrow.

Standing in the Hawks way was the St. Cloud State Huskies. During the 2017-18 season, the Huskies owned the Hawks. Including Friday’s 3-2 overtime win, SCSU was 3-0-2 against UND.

Last season, the Hawks went 5-1-0 against the Huskies and ended their season in the first round of the NCHC playoffs. Ironically, this season, the tables were turned. More than likely, the Huskies will end the Hawks season.

The two teams didn’t disappoint the fans. The game was very entertaining. For three periods of hockey, the two teams raced up and down the ice trading scoring chances, many of them of the grade-A variety.

For the first two periods, the Huskies got the better of the opportunities, but senior goalie Cam Johnson stood his ground stopping 31-of-34 shots.

The two teams would end regulation tied. The overtime period didn’t last long, 1:47 into the extra period, Nick Poehling would make up for his brother’s penalty by scoring the game-winning goal. Poehling took an errant pass from Josh Rieger and made no mistake, he snapped a shot past Johnson pushing North Dakota to the brink of elimination.

There was some question if the Huskies would be up for this game after having already secured an NCAA bid and the Penrose Cup. Huskies head coach Bob Motzko knew what he was going to get from the Hawks and his team was ready for the challenge.

“This is the 17th year that I’ve been in the league with North Dakota,” Motzko said. “Their radio guy asked me before, with their backs against the wall are you going to see more intensity. I started laughing. Do you ever think you’re not going to get intensity with North Dakota?

“I don’t know if you can be more intense? That’s a compliment to their program. I think that’s a silly question because they play that way all of the time.  I don’t know if you have a measuring stick of intensity, but that green team plays with it. You’re going to get it either way. Even if they the number one seed or they weren’t seeded at all. That’s a prideful program. So, we never ever talk to our team about… that their backs are against the wall. We’re playing North Dakota. We know exactly how the game is going to go.

“Sometimes we win, sometimes we lose. That’s what a rivalry does. We beat each other up.”