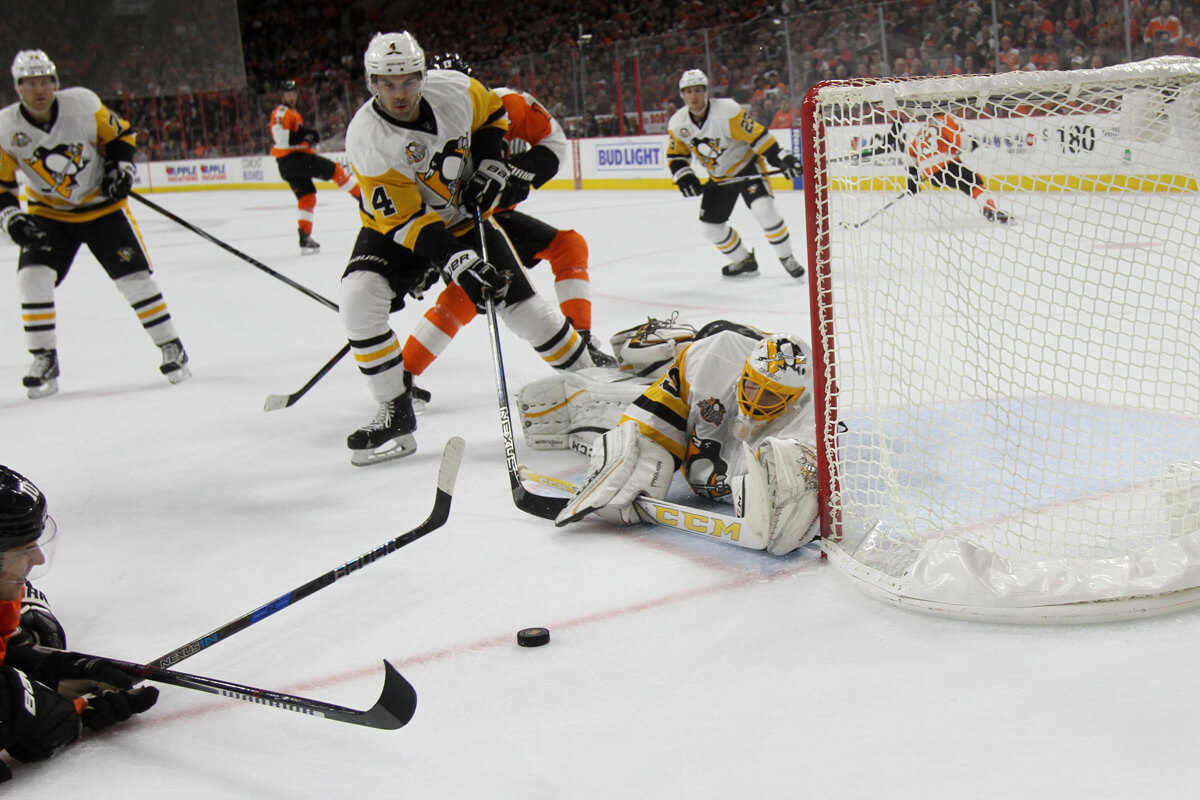 The Penguins’ decimated blueline has created an opportunity, and Justin Schultz is running with it.

He’s likely also pricing himself right out of a Penguins’ jersey next year – but, for now, they’ll take what their resurgent, 26-year-old defenseman is bringing.

“He seems to be getting better with each game he plays,” said head coach Mike Sullivan. “I think his confidence level’s at an all-time high.”

Since Kris Letang went down to a lower-body injury on Dec. 14, Schultz has led the Penguins in ice time with an average of 27:11 per game. That’s nearly two minutes more than Ian Cole, next on the list and Schultz’s frequent defense partner.

When Trevor Daley, second to Letang in ice time, also went on injured reserve just two days later, the Penguins’ D corps took another big blow. And, when steady blueliner Brian Dumoulin took a puck to the face late in Pittsburgh’s post-Christmas win over the New Jersey Devils Tuesday, the club was down to five defensemen, three of whom were in the AHL just a few weeks ago.

As of Wednesday, that number could jump to four, with Dumoulin out for 4-to-6 weeks after undergoing surgery for a broken jaw and Olli Maatta not feeling well enough to make Tuesday’s trip.

That will mean even more responsibility for Schultz. With the Penguins’ system largely built on coming out of their defensive zone with speed, his offensive capabilities have made him a natural substitute for Letang, their most important blueliner. But that’s not where his employers have been most impressed.

“We knew when we got him that he has really good offensive instincts and he could help us in that area of the rink,” Sullivan said. “What we’re really encouraged with is his overall game. He’s using his stick to defend extremely well. He’s using his mobility to get back for pucks and help us get out of our end zone.

“He’s taking pride in making a commitment with his play away for the puck. And I think, because of that, he deserves a lot of credit. He’s a complete defenseman right now for us. He’s playing at both ends of the rink; we’re using him in a lot of situations. He’s a guy we’re relying on a lot right now.”

That’s something not even the Anaheim Ducks, who drafted Schultz 43rd overall in 2008, nor the many teams that competed for his services in 2012 could’ve envisioned.

After a highly disappointing tenure with an equally disappointing Edmonton team, Schultz came to the Penguins at the trade deadline last year and found a fit. After skating with the Stanley Cup, he turned down other offers to return to the Penguins on a one-year, $1.4-million deal – a big downgrade from the $3.9 million he had been making, but a gamble that’s likely to pay off handsomely in the long run.

There’s no hotter defenseman in the NHL than Schultz. Since Dec. 1, he leads all blueliners with 16 points (6G, 10A). His plus-22 has been at or near the top of the league all year and, with a Corsi For of 54.02 percent, the Penguins are simply a more dangerous team with Schultz on the ice.

Schultz’s offense hasn’t come on the most shots – since Dec. 1, 26 defensemen have taken more than his 25. But his 24 percent shooting percentage speaks as much to his rising confidence as good luck.

“I don’t think I expect it to go in; the elite goalies in this league are going to make saves,” Schultz said, after he both started and finished the play that gave the Penguins a 3-2 lead with 5.4 seconds remaining in the second period versus New Jersey, paving the way for their 5-2 win. “But I was lucky enough to find some room.

“Pucks are kind of just going in for me right now. Guys are helping me; I’ve got great teammates here and they make me a better player.”

It’s not easy to replace players like Letang or Daley, and the Penguins’ coaching staff has taken a by-committee approach. But Schultz’s increased role has left little doubt who they’ve entrusted to lead that committee, and it’s paid off with a 10-1-2 December so far.

“I think all six of us that have been playing in the games have been doing a good job of stepping up a little bit and helping the team,” Schultz said.

“We’ve been playing well lately as a team, playing the right way – the way that got us all the way to the Cup Final last year and winning it. We just have to continue that and not relax. Just keep working hard and, hopefully, keep getting the wins.”