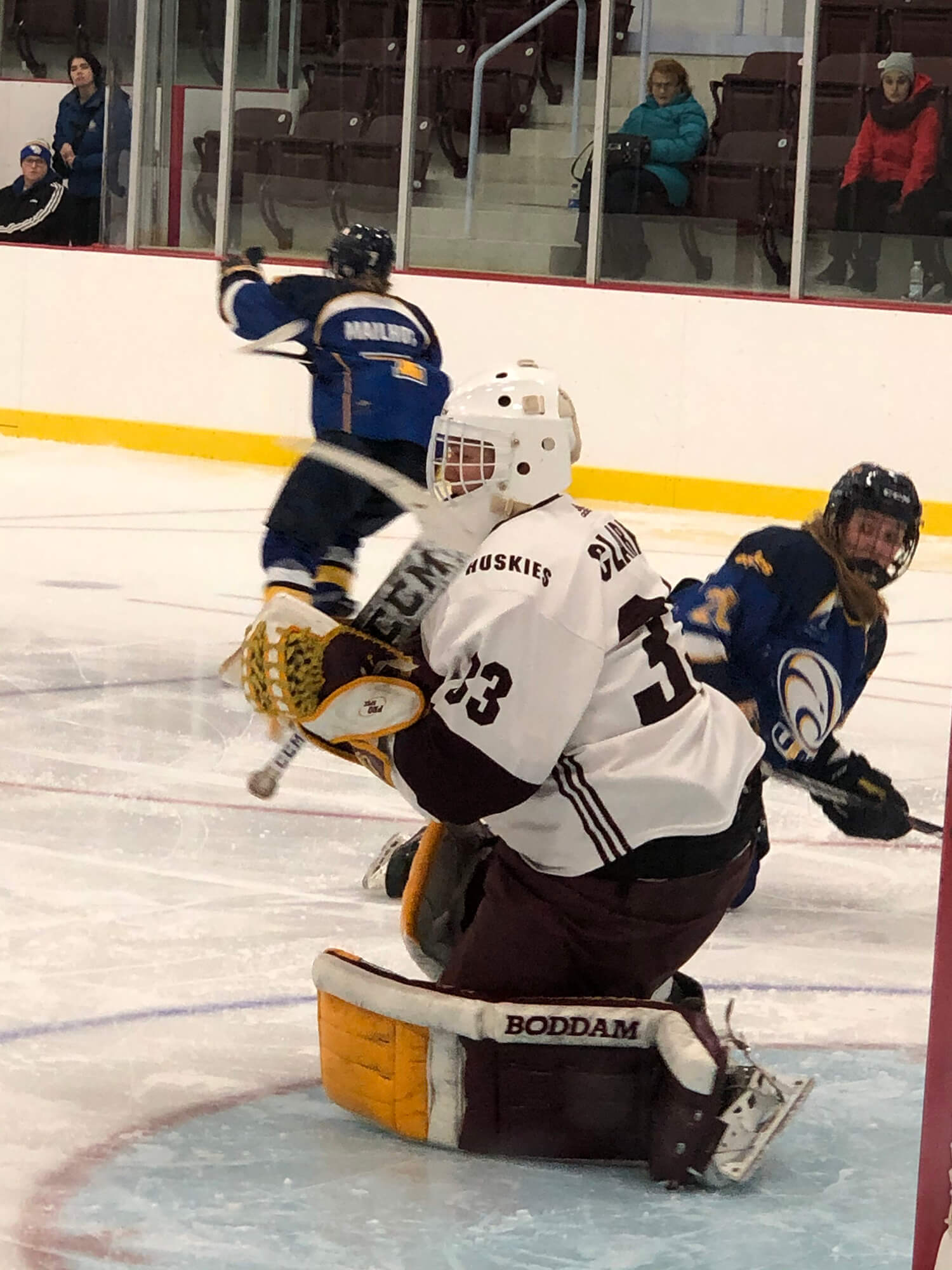 Mark it down: the first official goal scored by a Saint Mary’s University women’s hockey player at the Dauphinee Centre arena came off the stick of Kaitlin Howarth. Taylor Gravelle and Mary McDonald assisted. It happened just past two minutes into the Huskies game against the Moncton Aigles Bleues on Saturday, Oct. 5. The Huskies never looked back, ending the game at a 5-0 shutout. The arena, which has a capacity of approximately 1150, just opened on the site of the former rink located on the Saint Mary’s campus. The first Saint Mary’s goal scored in the facility came off the stick of men’s team captain Stephen Johnson in a 9-3 loss to Moncton on September 28th.

For the women Huskies, goaltender Rebecca Clark recorded the win and blanking of the Universite de Moncton. She faced nine shots. Moncton used their two goalies, who together turned back 29 shots, allowing the aforementioned five goals.

The game came as the first of a double-header on the day, with the men’s team set to take on Dalhousie in a 7pm contest. For the University, it was alumni weekend. The evening prior, their football team had jumped out ahead of Mount Allison, 9-0, before allowing the Mounties to come all the way back and win, 23-12. The Huskies added a late field goal after not scoring since the second quarter.

But back to the women’s hockey team. They opened their season with five exhibition games. The regular-season opener was Wednesday, Oct. 2, against cross-town Dalhousie. The season will stretch to mid-March, with the finals happening March 12-15 in PEI. They will play nearly 30 games before embarking on the playoffs, should they qualify.

The women’s game differs slightly from the men’s, with no hitting (there is considerable incidental body contact) and the requirement to wear full-face protection. The latter is also true in US university (NCAA) hockey. It probably should be true of Canadian Junior and University men’s hockey as well. The game on this afternoon was quick in its pace, with little cycling of the  puck but lots of excellent passing, especially  as Saint Mary’s put rushes together.

The skill level of the two teams, Saint Mary’s and Moncton, was not as divergent as the score indicated. The Huskies play an opportunistic game, and several of their goals came on turnovers made by Moncton players.

Saint Mary’s came out strong, scoring early, then watched as Moncton found their legs through the middle of the first period. The New Brunswick team recorded just a couple of shots, but tested Clark at least once. Saint Mary’s responded with another goal in the first period, one in the second, and two in the third. By the end, the Huskies were in full control, with  Moncton looking like their legs, so strong in the early going, had deserted them to a degree. Still, the play never became entirely one-sided. In short: this was pleasing hockey to watch right to the end.

The player of the game was Saint Mary’s #9 Kaitlin Howarth, who had that first goal and recorded two shots. I most noticed #21, Shae Demale. Demale has a deceptive wrist shot, super-quick release, and good placement. On one rush, for instance, she came down the right wing and shot to the long side. The Moncton keeper got a glove out and deflected it, but the shot was hard enough and quick enough that she didn’t get the glove on it properly. Not a surprise, since that’s what hockey players should do, right? Well, I just finished watching the NHL rookie tournament in California, and let me tell you, the number of times that NHL draftees came down the middle and shot right into the goalie’s chest shocked me.

Demale knows how to place a shot. She had four shots on the day, with no points. The team leader in shots was Ellen Laurence, with seven. She scored the final Saint Mary’s goal early in the third period.

Just one more note on Demale: she’s an academic all-Canadian, as is Howarth. Seven of the Huskies players currently hold that honor. Demale is a second-year science major from Red Deer, Alberta.

The Dauphinee Centre is a must-do for Halifax-based hockey fans. No bad sightlines and very small protective nets (so almost every seat has a  clear view of the ice surface) make the show seem right up close.

Normally, I cover the NHL as a member of the PHWA. This next couple of weeks, I’ll be in Halifax working as a research fellow at the Centre for the Study of Sport and Health at Saint Mary’s University.