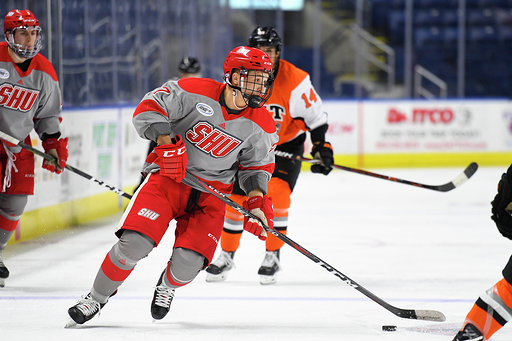 Bridgeport, CT — Among Atlantic Hockey schools, Sacred Heart does not command much long-term success. The Pioneers have only reached to Conference Title games in 2004 and 2010 and lost both. They’re also only six years removed from a disastrous two-win season. This year, Sacred Heart ended the regular season with eight wins in eleven games and earned home ice at Webster Bank Arena for the Atlantic Quarterfinals against the Rochester Institute of Technology. The Pioneers responded with an offensive explosion to open their bid for the first Conference Title in program history.

The opening period was even. Each team fired the puck 15 times. Sacred Heart opened the scoring when Jordan Kaplan corralled a rebound off the end boards that Ruslan Rakhmatov blasted. The momentum kept up when Vito Bavaro took a perfect centering feed from Nick Boyagian and redirected the puck through Tiger starting goalie Logan Drackett. RIT answered with an Alden Dupuis shot in the slot off a faceoff. The teams traded blows for the remainder of the frame. Alex Bates took his shot and extended the SHU lead to 3-1 before Abbott Girduckis cut the lead back to 3-2 with 1:02 to play in the frame. SHU maintained their lead into the intermission.

The Pioneers entirely turned the game upside down in the second. They only got seven shots on net for the frame, but four of them got into the RIT net. Jordan Kaplan started the scoring just before the middle-point of the frame with a fortunate rebound to the left doorstep. Austin Magera chased Logan Drackett from the net by tipping in a Ruslan Rakhmatov shot from above the right circle. Matt Tugnut welcomed Ian Andriano by picking his pocket and depositing the puck in the open net. Ryan Steele ended the explosion with a wraparound in the dying seconds of the frame. RIT only got four shots on net and trailed 7-2 on the scoreboard.

SHU did not let up in the third when Christian Short took the net. Marc Johnstone opened the frame with a transition play only 19 seconds in. Later in the frame, Matt Tugnutt scored his second of the night on a shorthanded breakaway. Alden Dupuis scored his second of the game and Nick Bruce got another goal in garbage time to end the scoring at 9-4 in Sacred Heart’s favor.

RIT drops to 15-16-4 in the worst defensive performance since allowing nine goals to the US National Development team back in January 2006. All three goalies saw action and none looked convincing. Logan Drackett got 31:48 minutes and allowed five goals on 18 shots. Ian Andriano finished the last 8:12 of the second and allowed two goals on four shots. Christian Short played the final 20 and allowed two goals on nine shots.

The last time allowing eight or more goals was to Providence in December of 2017. The worst defensive performance in a regulation

Sacred Heart improves to 16-15-4 with the program’s best offensive performance since January 19th, 2002 when the Pioneers beat Bentley 9-1. Eleven different players earned points for the team. Jordan Kaplan doubled his career-high in points, with two goals and two assists for four points. Ruslan Ruskhmatov recorded a career-high in points with three assists.

“Before the game, we made a commitment to play hard for each other, hold each other accountable, and make sure we all had a common goal”, explained Kaplan, the sophomore from Bridgewater, NJ. Even in the elation of victory,  “They’re a gritty team. We just have to come out and act like today didn’t even happen.”

The teams play Game 2 of their best-of-three playoff series on Thursday night. Puck drops at 7 pm at Webster Bank Arena. A win propels Sacred Heart to the AHA Semi-Finals in Buffalo, NY, for the first time since 2010. an RIT win forces a decisive Game 3 in Bridgeport.