Bridgeport, CT- Amidst the best season in program history, Sacred Heart University has more good news. On Saturday afternoon, the Catholic school in Fairfield announced the construction of a new $60 million, 4,000 capacity ice hockey rink to be built on the school’s West Campus.

Sacred Heart hosted their men’s hockey games at the Webster Bank Arena, 8.8 miles away from campus, since the 2017-2018 season. Before that, the Pioneers called the 1,000 person Milford Ice Pavillion home, 12 miles from campus.

The Pioneer’s women’s team, inaugural champions of the New England Women’s Hockey Alliance in 2018, has played home games at the Sports Center of Connecticut in Shelton, 9.8 miles from campus, since 2014.

“This arena will be the Division I intercollegiate skating crown jewel and a standout facility in the Northeast,” claimed Jim Barquinero, senior Vice President of enrollment, student affairs, and athletics.

ALG of North Dakota is designing the building in collaboration with the S/L/A/M Collaborative of Glastonbury.

SHU’s West Campus is the former General Electric campus that was vacated when GE relocated to Boston.

The University revealed the following renderings of the future rink. 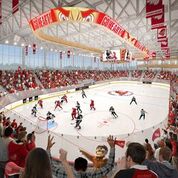 Rendering of the inside of Sacred Heart’s new hockey building. 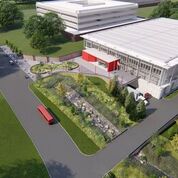 Rendering of the outside of Sacred Heart’s new hockey building.

Sacred Heart is the third Atlantic Hockey program to build a new on-campus facility in the last decade. RIT opened the Gene Polisseni Center in 2014 and Bentley opened the Bentley Arena in 2018.

Ground breaks on the new arena in the summer of 2020 and is slated for completion in 2022.