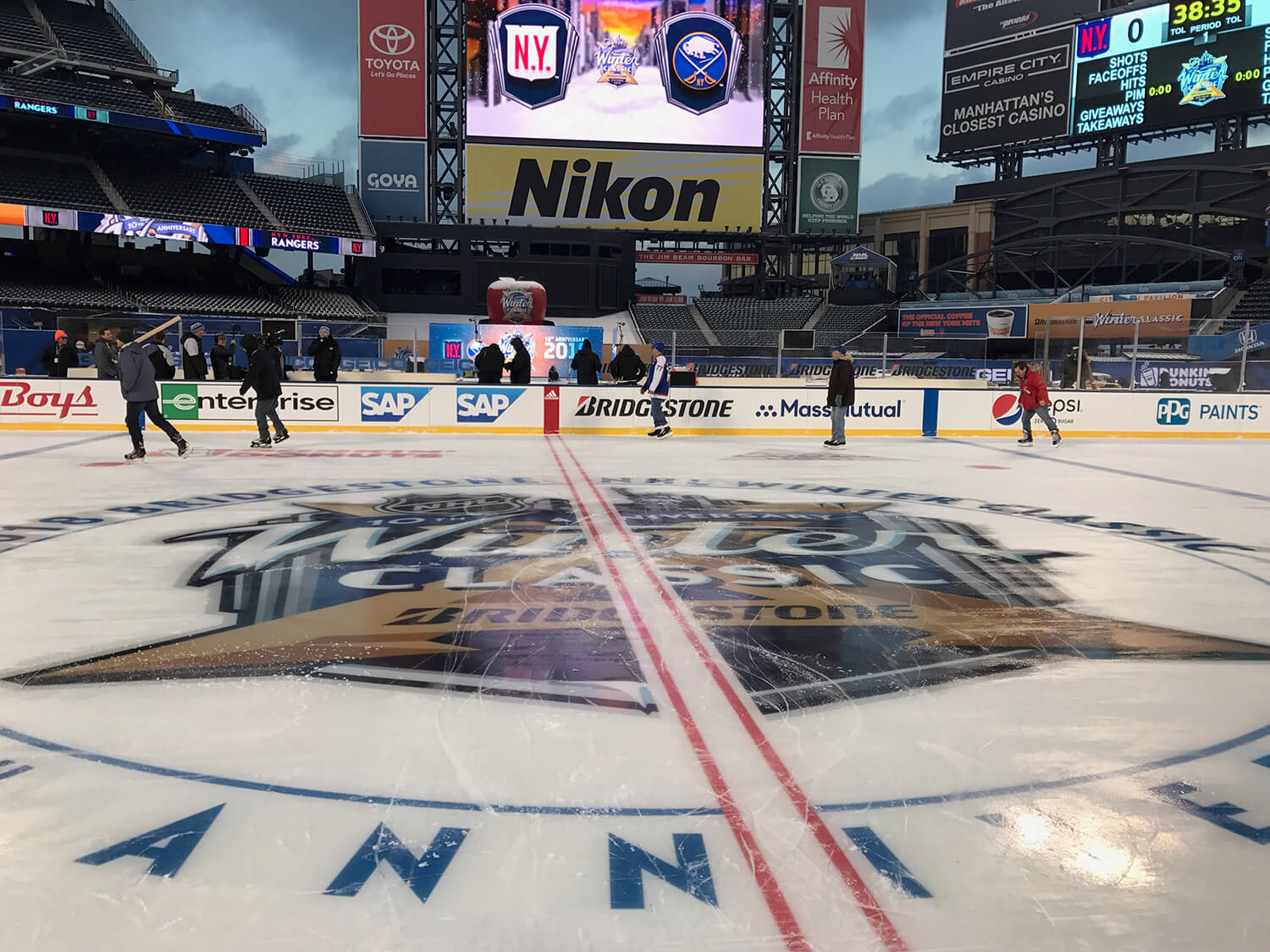 NEWARK, N.J.–After 10 years, the NHL’s marquee event will be in New York City.

The Buffalo Sabres will host the New York Rangers in the 2018 Winter Classic on Monday at 1 pm at Citi Field. The usual home of the Mets will be transformed into a hockey rink for the festivities. Though it’s less than 30 minutes from Madison Square Garden, home of the Rangers, the game will be considered a Sabres home game. Stipulations from New York’s agreement with MSG prohibits the Blueshirts from hosting any contest away from the world’s most famous arena.

For the Sabres, who enter the Classic 2-3-2 in their last seven and are coming off an overtime victory over the Devils on Friday, the spectacle allows for something special to come from a season that seems destined to be mostly forgettable.

In winning on Friday, Buffalo avoided the distinction as the only team in the East with single-digit wins. Still, their 10-20-8 record is undeniably bad. It’s particularly difficult to swallow given the hype surrounding the team prior to the start of the season. The offseason including some steps forward in hiring Jason Botterill, formerly of the two-time cup champion-Penguins as general manager and Hall of Fame player, Phil Housely as the club’s new head coach. Jason Pominville, one of the most popular players in the last 10 years, returned to the team in the offseason in a trade. But the biggest move was the signing of forward Jack Eichel to a 10-year, $80 million contract extension.

The first three months though haven’t gone according to plan for Buffalo and the start of 2018 might be welcomed for more reasons than just the Winter Classic.

“This is going to be a great thing for Buffalo and the organization,” Housely said following the team’s OT victory in Newark. “We get to represent the community and the fans of Buffalo so we’re looking forward to it, we are going to enjoy it and It’s great to have a win before you go into it.”

This will be the second appearance for both the Sabres and Rangers in the event. Buffalo hosted the first-ever NHL Winter Classic against the Pittsburgh Penguins on Jan. 1, 2008, a 2-1 shootout loss at Ralph Wilson Stadium in front of 71,217 fans.  New York defeated the Philadelphia Flyers 3-2 at Citizens Bank Park in the 2012 Bridgestone NHL Winter Classic on Jan. 2, 2012.

The Sabres players have every intention of making the most of this experience and didn’t hide back their excitement when talking about the event.

“That’s going to be a lot of fun having our families out there on the rink, taking pictures,” said Jordan Nolan. “Just the whole experience, it’s the total package for me. I’m very excited to be apart of it all.”

Eichel, who is soon to be the highest-paid player on the Sabres roster, is coming off a strong month. He’s recorded 16 points in 13 games and on Friday he tallied a goal and five shots on goal. He’s just 21 and knows there’s a lot of time for this in his career, but he’s relishing the opportunity. He’ll have several friends and family members in town for it.

“Just being able to share the whole experience with my family and friends will be cool,” he said. “That’s one of the best parts about it probably. The Sabres have done such a great job of giving us so many opportunities to bring so many people here and really make them a part of the event.”

Housely, who never played outdoors in his NHL career, has liked the team has played of late and is hoping the team can carry some of their play onto the big stage.

“I just like the way we’ve been playing these last two games against two really good teams,” he said. “I’m just really proud of our guys the way they battled. When we keep pucks moving north and get on the forecheck, we’re a tough team to play against.”

The NHL probably would prefer the Sabres to be higher in the standings than they are ahead of the featured event, but they do have the privilege of utilizing one of the country’s top, young talents. Eichel has been featured in almost every ad leading up to the Winter Classic. He understands the importance of the event but isn’t letting the buzz surrounding get to his head.

“It’s obviously a big stage, right?” Eichel said. “You want to put your best foot forward and show the world what you can do. The NHL does a really good job of leading up to it, building the game up and getting a lot of attention towards it so I’m excited. You can always say you are apart of it. It’s a great opportunity for us to play on national TV. But at the end of the day, it’s just another NHL game and we are playing the New York Rangers. We played them a few times. It’s a big game obviously but nothing really changes, you go on the ice and you’re just playing outdoors instead of inside.”