When the National Hockey League decided to not stop their season to allow their athletes to partake in the 2018 Olympics in Korea, there was great disappointment, division, and opportunity. While fans were unhappy to not see the world’s best players skating for their countries, it gave chances for different faces to participate in the Olympics. For it’s part, USA Hockey decided to ice a mix of former NHL players, minor leaguers, and college players. The mix of youth and experience has forged an intriguing unit that will serve as a swan song for players like Brian Gionta and a career bump for college stars. Among the young guys, Harvard’s Ryan Donato is both a dazzling attraction and the most prepared.

“I found out a week before the announcement that I was on the team. I knew it was in the mix, but it was such a great feeling to know that I had made the team.”

It’s not Donato’s first time wearing the red, white, and blue. He played in the 2016 World Juniors in Helsinki, Finland, where he helped the team to a Bronze medal. He played with Olympic teammate Will Borgen and current NHL players, like Auston Matthews, Anders Bjork, Charlie McAvoy, Brock Boesser, and Matthew Tkachuk. This tour of duty will see him alongside college rival Jordan Greenway, of Boston University, and several former college greats in Chris Borque and Matt Gilroy. 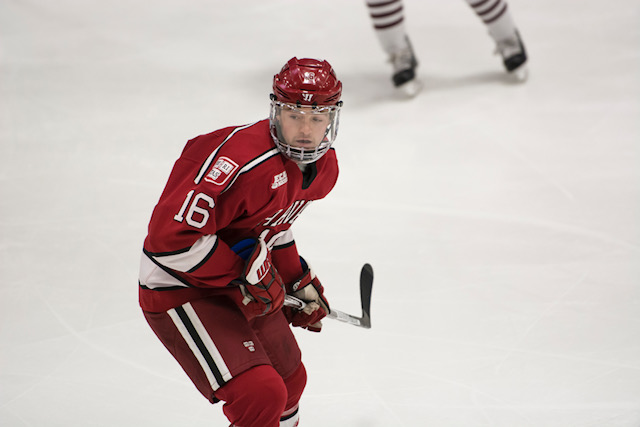 “It’s great that Jordan’s not gonna be beating me up on the ice. He’s a terror infront of and behind the net, and it’ll be nice having him on my team. It’ll be the first time I’m on a team with a big age difference. Brian (Gionta)’s 38 and I’m 17 years younger. It’ll be an adjustment skating with someone that much older, but I look at it as a chance to learn. There’s plenty of tricks I can learn from the older players and incorporate it into my game. Everyone who’s on the team deserves it.”

Donato’s talents are a natural fit on the team. He is a smooth skater, a skilled faceoff player, and is a gifted passer and goal scorer. While Greenway and Borgen bring physicality and blue collar play, Donato gives skating and skill to the team. Anyone following college hockey knows about the Scituate, MA native.

The 21 year old skated to notable success at the Dexter Academy and in the USHL with the South Shore Kings and the Omaha Lancers. When deciding on college, he followed his father, Ted Donato, and chose the greatest academic institution in America. As a sociology major in Winthrop House, young Donato has enjoyed his time in school. But on the ice, he has been a super star.

In his first season, Donato, a natural center, skated on the wing while Alexander Kerfoot and Jimmy Vesey played center and led the team to the NCAA Tournament. Last season, Donato excelled on the wing again. Vesey had graduated, but with Kerfoot and other seniors on the team, Harvard put together a magical season. The team won the Beanpot, the ECAC regular season and post season crowns, and made the Frozen Four for the first time since 1994. For the season, Donato had 21 goals and 19 assists for 40 points, tied for fourth on the team.

After the season, Kerfoot graduated and Donato was moved back to his natural position of center. The move has been spectacular. In 19 games, Donato has 20 goals and 9 assists for 29 points. He has the highest points per game rate in the NCAA and would be a candidate for the Hobey Baker Award, if not for his call to represent the United States. College has prepared him to compete on the Olympic stage. But his connection to his father and coach is why he’s more prepared for the Olympics than others.

In 1992, Ted Donato skated for Team USA at the Winter Olympics in Albertville, France. He helped the Americans to a 4th place finish and narrowly missed a medal after a hard loss to the Unified Team of former Soviet States in the Semi-Finals. He still looks at it positively. “The Olympic experience is one of my dad’s favorite hockey experiences. He’s told me about it all the time. He planted the dream of playing the Olympics in my head and now it’s come true.”

Still, before flying to Korea, his focus is on Harvard getting back into national contention.

“My goal is to build as much momentum as possible for us so when I leave, we’re in a good position to win. I want to go on another deep playoff run when I get back from the Olympics.”

Team USA flies to Korea on February 8th, and the Olympics close on  the 25th. Donato will miss Harvard’s second game of the Beanpot tournament and the end of the regular season, but he will be able to return for the ECAC playoffs. Harvard currently sits at fourth place in the standings at 9-6-4 overall and 8-3-3 in conference.

For all the hype surrounding him, Donato is staying locked into the moment. He was drafted by the Boston Bruins in the 3rd round of the 2014 NHL Draft. When asked about whether 2018 will be his last year at Harvard, Donato simply said: “I haven’t thought about it. When the season’s done, I’ll think about it and see where I am at the time.”

So while his long term future isn’t settled, Donato has the preparation, skills, and mindset to help Team USA to a medal in Korea.