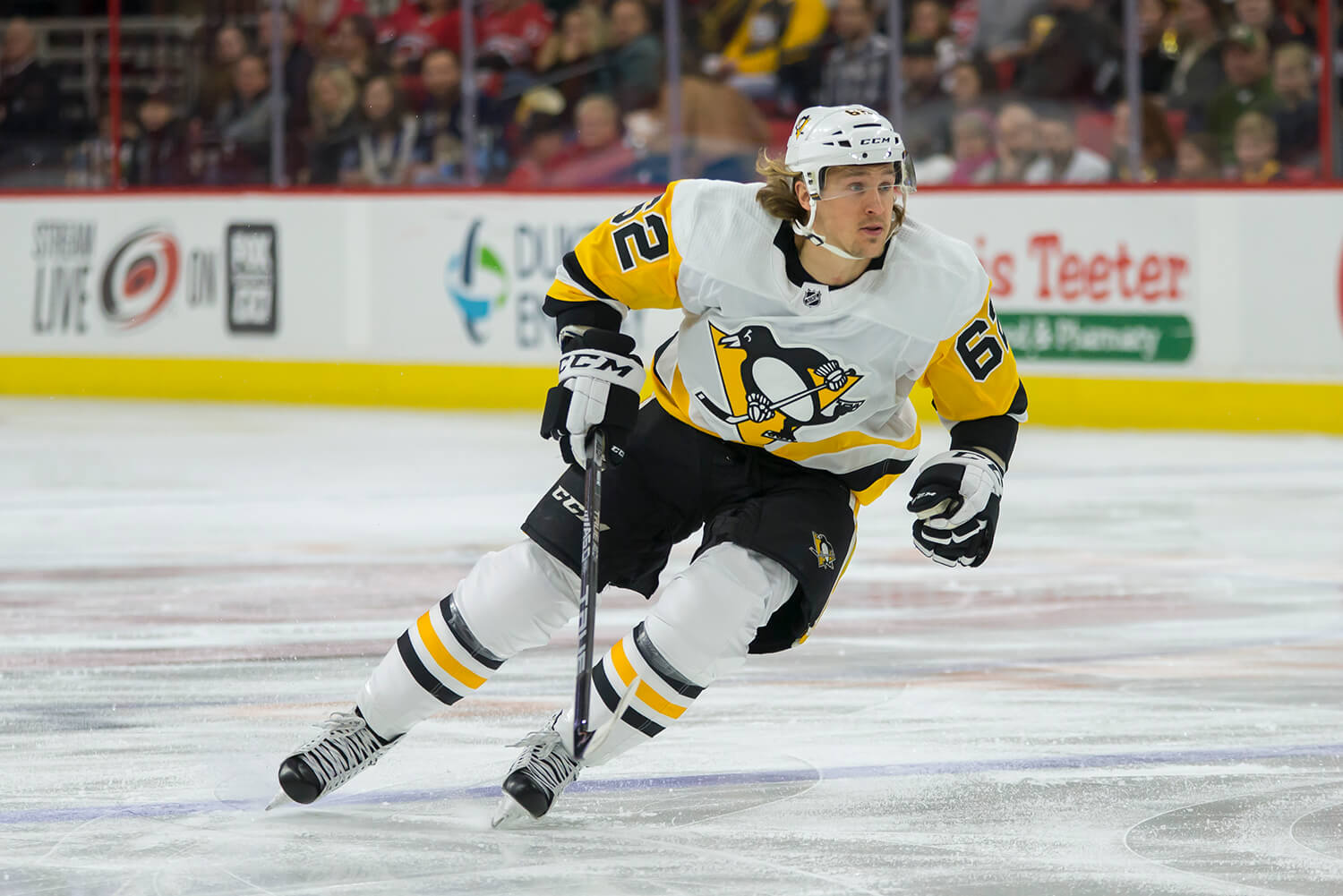 CARL HAGELIN (62) enters the attacking zone during a game against the Carolina Hurricanes. The Hurricanes beat the Penguins 2-1 in Regulation.

Penguins GM Jim Rutherford is nothing if not transparent. So, when he went public with his disappointment in his team’s subpar start on the GMJR Show last week – and threatened changes if things didn’t improve – the Penguins could officially consider themselves put on notice.

“We’re not playing with any energy or determination,” Rutherford said of his club, which had lost four straight at the time. “These other teams are coming and outworking us, and they deserve to beat us. In some of these games, they probably deserve to beat us worse than the score indicates.”

Rutherford called out the players beyond Sidney Crosby, Evgeni Malkin, Phil Kessel and Kris Letang for failing to provide depth scoring or fulfill their roles. “It’s almost like the guys come to the games and say ‘Let’s just let the top guys do it. Let Sid and Geno and Phil and Letang carry us.’”

He criticized “inconsistent goaltending” from Matt Murray and Casey DeSmith; players who had just received bigger contracts, like Bryan Rust and Brian Dumoulin, for “settling in;” and pending UFAs, like Riley Sheahan and Carl Hagelin, for “changing their game” while working toward their next contracts.

No one was immune. And Rutherford was clear that, if the spiral continued, he would take it as a sign that it was time to shake up the team.

A strong performance in Washington last Wednesday still ended in a last-minute, 2-1 loss, but gave the Penguins something to build on. They busted out of the five-game losing streak Saturday with a dominating, 4-0 win over the Arizona Coyotes at home – but Tuesday, with the opportunity to keep building on that momentum in New Jersey, lapsed twice too often and ended up on the wrong end of a 4-2 decision.

Wednesday morning, armed with the organization’s confidence in the form of a brand-new, three-year contract extension, the 69-year-old GM delivered on his promise to start making changes.

Hagelin, the 30-year-old Swedish winger who had been an integral part of the Penguins’ back-to-back Stanley Cups, was traded to the L.A. Kings Wednesday morning in exchange for 26-year-old winger Tanner Pearson.

“We felt that we needed to make some changes,” Rutherford said. “This could be the start of more changes, or we’ll see how this goes here for a little bit. But, the way things have gone here in the first part of the season, it’s obvious that we have to change something up.”

Rutherford said he felt bad about dealing the popular, likeable Hagelin. “But, at the same time, we’re not tracking toward winning a Stanley Cup right now and changes are necessary.”

Pearson, a Kings first-round draft pick at No. 30 in 2012, has averaged around 40 points a season for the past three years, but put up only one assist in the first 17 games this year. He has two years remaining on his contract at $3.75 million per year, an identical cap hit to Hagelin’s but with additional term.

“He’s off to a slow start this year,” Rutherford said. “Maybe lost his confidence a bit in the early going. But he’s had a good career, he’s able to play with their top guys, and I believe a change will be good for him and he’ll be a good fit for us. He’s a little younger than Carl, he’s locked into a contract for a couple more years that we like, and he’s a good all-around player.”

And if the deal affects the chemistry in the room? Well, that was probably part of the message Rutherford was trying to send.

“I’m sure it’ll affect the chemistry; he’s a very popular guy in the room,” the GM said. “But I’m not sure how strong the chemistry is right now, based on what I’m seeing.”

“Obviously he’s sending a big message to the group, like we have to be better,” said forward Patric Hornqvist, who loses a close friend in Hagelin. “It’s been 16 games now, and we might be playing five good games, a few average, and probably seven or eight really bad ones. It’s just part of this business. It’s a tough business to be in but, at the same time, that’s why we play; we want to win. We all understand this but, right now, it’s a tough decision.”

“I don’t think we’re playing the way we want right now, I don’t think we’re happy about results, and I think these things happen in those circumstances,” said defenseman Kris Letang. “It sucks to see a guy like Haggy. He’s the same kind of guy like Flower [Marc-Andre Fleury] was; he brings so much joy to the dressing room. He’s always happy, he always comes in with a good attitude, always giving 100 percent out there, working hard. It’s fun to have a guy in your dressing room like that.”

As for the new addition to their dressing room, the Penguins have a positive impression of Pearson.

“He’s a good player,” Hornqvist said. “He can bring energy; he can score goals. Obviously we needed a little shakeup, and he will be good for us.”

For the 7-6-3 Penguins, who have lost six of their past seven and sit at No. 7 in the eight-team Metro Division, the road back to respectability doesn’t get any easier Thursday as they host the 12-5-1, Atlantic Division-leading Tampa Bay Lightning. Crosby is also day-to-day with an upper-body injury.

Rutherford, as always, will be watching from his box, assessing the on-ice product against the high expectations he has for his hockey club.

“I’m usually very patient, but my patience is running out,” he said Wednesday.

But don’t take that to mean that the Hagelin trade was a reactive move.

“It’s more about what’s happened from the start of the season,” he said. “We entered the season with a very good team, a team that should contend for the Cup. I believe we can still do that, but we’ve got some work to do.

“We’ve got some inner workings of the team that need to be worked out; I believe we have the players to do it. Obviously we’re better if we have [injured forward Derick] Brassard and [defenseman Justin] Schultz in the lineup; it makes a big difference. So it’s been a little bit of everything, but it certainly hasn’t gone the way we would expect with the players we have.”