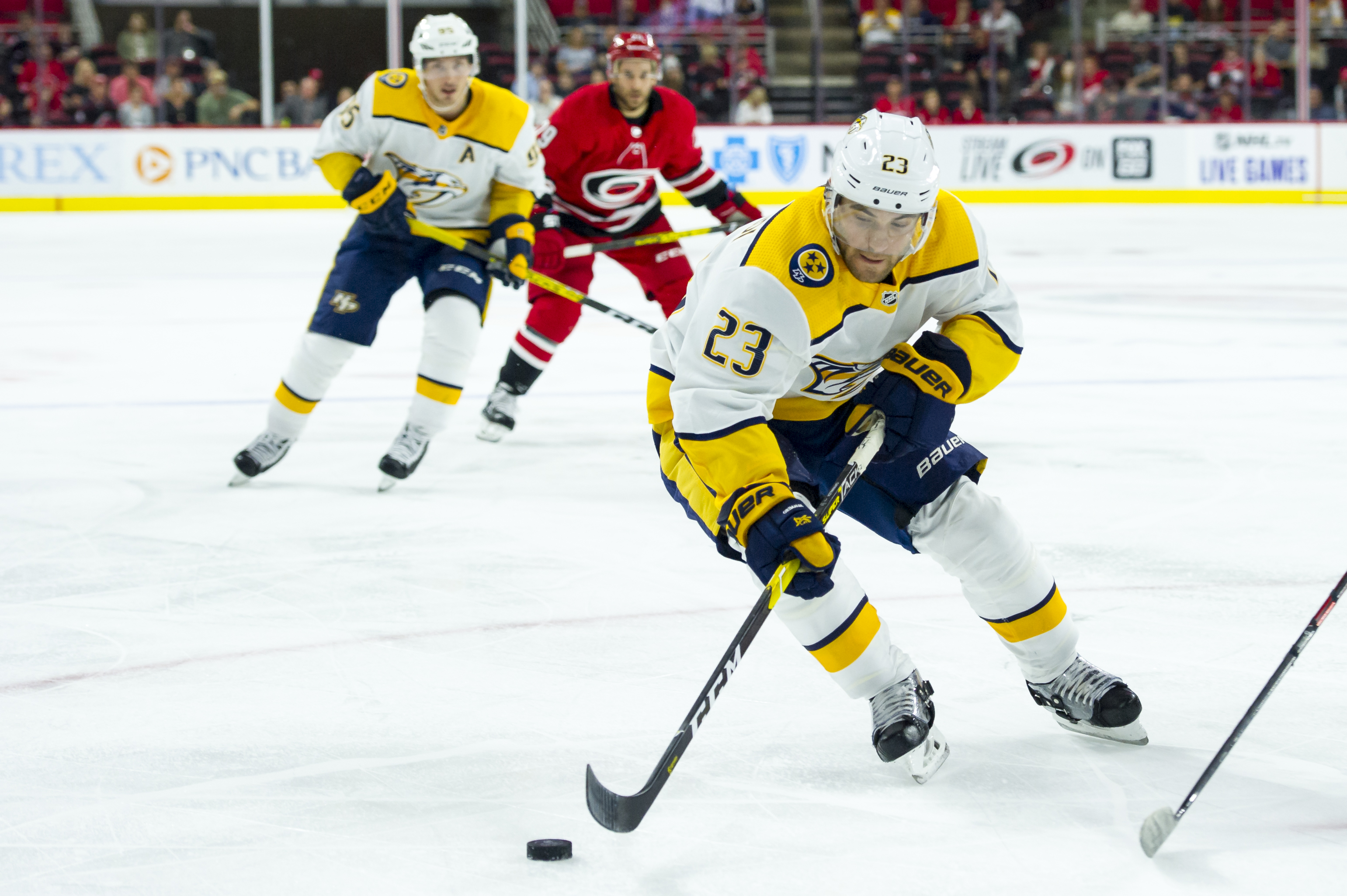 Rocco Grimaldi: The Heart of the Predators

Professional athletes in American sports leagues are measured by their physical prowess, speed and explosive strength in proportion to the general society.  From a young age, many would-be athletes are sized up and their ability to play a sport is determined solely by their physical stature.

If this is the case, then why is Rocco Grimaldi even playing in the NHL? According to the latest statistics, the average height of an NHL player currently is 6’1″.  Rocco Grimaldi is only 5’6″ and 180 lbs. which makes him currently the second smallest player in the NHL (Columbus center Nathan Gerbe is only 5’4” and is officially the shortest player currently in the NHL.)  Furthermore, adding insult to injury to hockey purists, Grimaldi was born and started playing hockey until he was eight years old in Anaheim, CA.  The first words of indignation that many hockey fans from colder climes will no doubt say is California?  Isn’t California the land of sunshine, beaches, surfers and certainly not hockey players?

As a former resident of southern California who spent most of his life in that sunny and warm region, I can assure readers from the north and the east that there is hockey in the Golden State.  With two NHL franchises and multiple AHL teams just in the southern California region, the sports influence is felt and hockey is popular out west as well.  Rocco Grimaldi was born in 1997 and at an early age was exposed to both ice and roller hockey as sports in the Anaheim area around Orange County.  As Grimaldi excelled in both styles of hockey, his family moved in 2005 to Auburn Hills, MI in order to allow Grimaldi greater exposure to youth hockey programs with an eventual eye on moving up to the collegiate and possibly professional ranks.

Grimaldi was able to attend the University of North Dakota on a hockey scholarship and played three years with UND.  On May 7, 2014, Grimaldi was further able to experience his dream of becoming a professional hockey player by signing a three year entry-level contract (ELC) with the Florida Panthers.  After moving around from the Panthers to the Avalanche organization and time in the minors with the San Antonio Rampage, Grimaldi came to the Nashville Predators on July 1, 2018.  Rather than see Grimaldi’s lack of stature as a liablity, teams from the AHL’s Rampage to the Nashville Predators now see his height as a weapon:

“He’s fast. And because he’s small, it’s easy to lose sight of him when he squats low, as he did on a wraparound goal Friday. And since Grimaldi can’t muscle opponents, he has to be more creative with the puck.  His height, meanwhile, poses challenges for defenders who have to bend down to check him, lest he slip away untouched.” – Roy Bragg, San Antonio Express News, 1/29/17

During the 2019-20 season which is now on indefinite hold, Grimaldi’s statistics don’t necessarily jump off of the page.  Grimaldi is currently ninth on the Predators roster in terms of scoring with 10 goals and 21 assists in 66 games this season so far.  What the statistics doesn’t explain is how Grimaldi is famous for his gritty style of play and setting up scoring chances for other teammates.    When Grimaldi was originally signed by the Predators, he signed a two year, $1 million dollar per season deal.  Predators GM David Poile made sure that Grimaldi remains in Nashville for the conceivable future as he received a two year contract extension just prior to the NHL trade deadline last February worth $2 million dollars annually, doubling his contract salary.

Although Rocco Grimaldi may be short of stature, his talent and deterimed style of play allows him to be the  heart of the Predators organization.  As the old saying goes: “it’s not the size of the dog in the fight but the size of the fight in the dog.” Grimaldi’s toughness is epitomized when he had to go up against Zdeno Chara of the Boston Bruins, who at 6’9″ is the tallest player in the NHL, in a game back in November, 2018: