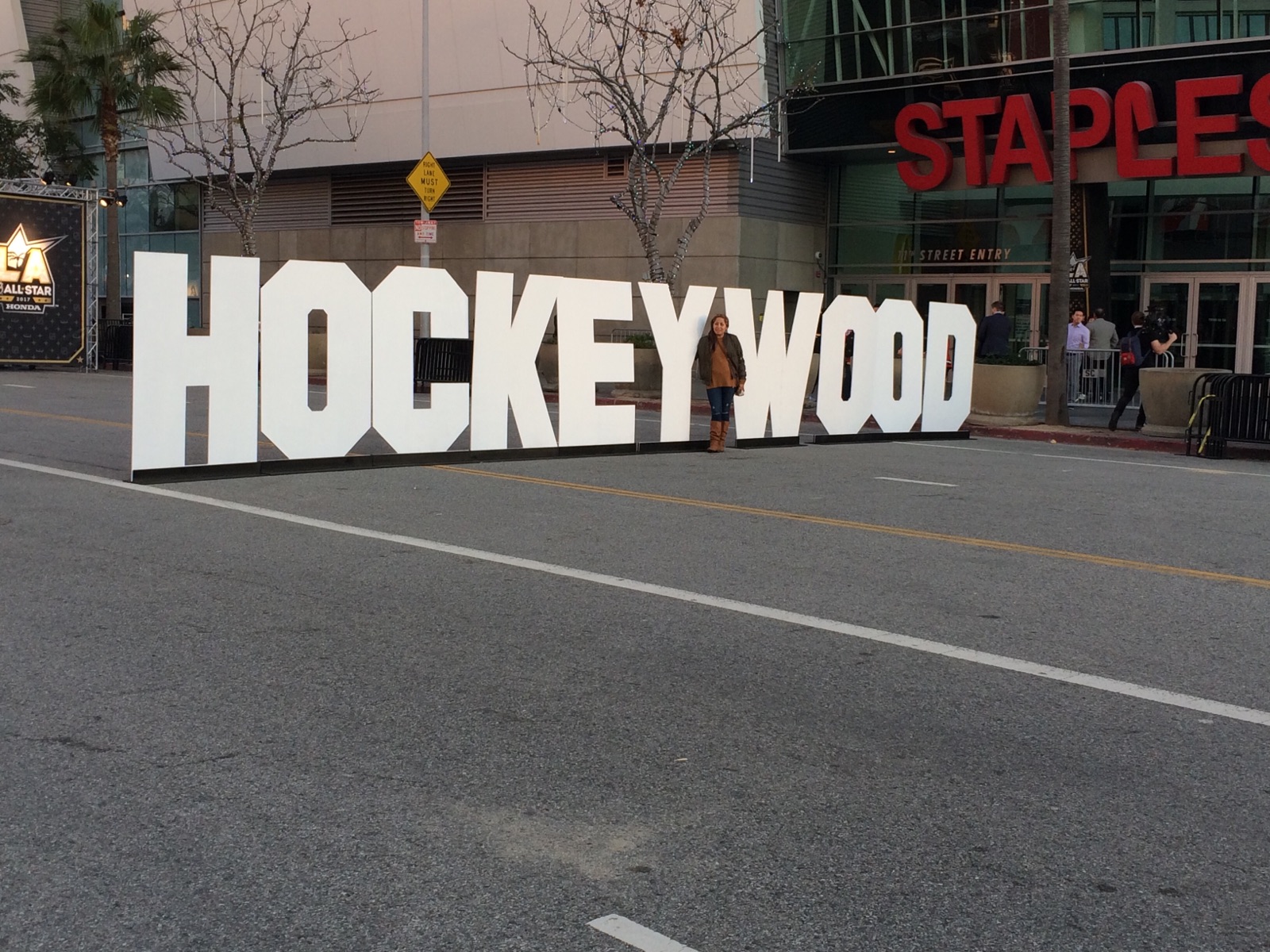 “Kesler’s in the house.” Booooo!

That was the reaction of the crowd at Staples Center on Saturday afternoon, understandably many of whom were Kings partisans. But when Kesler went in on Carey Price, deked and put one through the Canadiens goalie’s legs, the crowd went wild.

How can that be explained? Because the first Kesler was Ryan, the Ducks’ player, who got the same playfully negative reaction that Cam Fowler did, and the representatives for the Sharks, Burns, Pavelski, and Jones.

The second Kesler, the one who took the puck from center and beat one of the best goalies in the world, was Ryker, Ryan’s son, dressed mini-identically to dad in a #17 sweater.

And you know what? Sure, Price let him score. But it wasn’t like he flopped and left the whole net open. He left the kid a spot under the pad, and the boy found it. I’ve played a bunch of hockey, and a good two-thirds of the rec players you’re gonna see wouldn’t likely put that one in. Good on ya, boy. Watching it on tape after the end of the afternoon, it’s not even like it looks like a set-up. This kid actually has some skills.

After the game, as Kesler the dad was being interviewed, the real hero showed up. The Q and A wasn’t what you’d call flowing, but hey, the kid’s sitting there in front of dad with a whole bunch of adults, some of us undoubtedly as scary as Brent Burns, and the lights are on. The cameras aren’t whirring, because they’re digital, but they’re going. The IPhones are on “record” mode. And he answered the questions.

How cool was it? “Really cool.”

Did you think you’d score? “Yeah.”

Who taught you that goal celebration? “My dad.”

“He watched enough youtube clips that he knew the weakness” of Price between the legs, Ryan said. “He was confident. I was nervous. I asked him if he was nervous, and he said, ‘No, I’ve got this, I’ve got this.’”

Fully in dad mode, Kesler said, “To be out there with Ovechkin and Crosby, those are his favorite players.”

And the afternoon’s star, Ryker, said that his dad ranked #3 on his favorite player list, but he changed his story later. “Two,” he said, without specifying who was number one.

Sticking with the family theme, Duncan Keith had his little boy with him. He was happy to ask his son which was his favorite team with a few of us standing watching. “Sharks,” the kid said, and when asked who his favorite player was, the answer was quick: “Brent Burns.”

Now make no mistake: Brent Burns is an amazing hockey player, a nice guy from what my few encounters with him have suggested, and a man willing to answer questions without cliché and with some humor to boot. But if I were three or four, I think I’d see Burns as a rather scary figure. The beard, the hair, the (lack of) teeth. But Keith’s son was resolute, even when the question was repeated.

“Are the Blackhawks your favorite team?” Keith asked.

“No the Sharks,” the kid repeated. His dad said he thought it might have been the logo.

Some of these players are barely more than boys themselves, being realistic, and two baby faces included Patrik Laine and Connor McDavid. I got a chance to query each about what the competition was like.

Laine, who was remarkably consistent with his two hardest shot tries, at 101.5 and 101.7 and was just nosed out of the win, said he would like to think that balancing accuracy and hard shooting would be the best way forward. “I had too much pressure in the accuracy competition, so that wasn’t good.” But the Winnipeg team, “Had the same kind of event . . . earlier in the season, and I think my shot was about 101.2, so it was a happy surprise that I shot harder than that.” Weber won that at 102.8mph.

McDavid commented on his fastest lap win. “You can’t really practice that, though I got to do this once in the Edmonton skills competition. But that was the only time I’ve really done it.”

I asked him about his strategy, which seemed to have him kind of stopping in the middle of his turns and then charging out of the corners. “To be honest, that turn is a lot sharper than it looks. You’re going in with a lot of speed, and those pucks, or whatever they have blocking the middle there come up pretty quick. You can’t hit that corner too fast or you find yourself swinging into the other lane. So I needed to slow down a little bit and make sure I nailed the turn.”

He said he wished they had a running start like last year’s competitors did, and it was also suggested that he had a disadvantage because he had just won the short-course (between the nets) fastest skate competition. (The full lap was for the winner of the short course only.)

Shifting gears a little bit but staying on the happy stories theme, you might have read before the All-Star game that many thought Mike Smith unworthy of his spot. To be blunt, the word was he’s the best of a bad lot since someone had to represent Arizona. Well, he shut everyone up with one shot, during the “Four Line Challenge,” taking a shot from behind the goal line at one end of the ice and scoring into a tiny five-hole space in the net at the other end.

McDavid would say to a TV reporter that he couldn’t have done it had he had 100 chances. Probably not true, but to be one-of-one is like getting a hole in one, and it was nice for Smith to have something to be notorious for and to cover up the slight taint that had accompanied his participation. Call it the John Scott moment of the year.

Crosby repeated the comment. “The way he plays the puck it doesn’t surprise me,” he started out, “But then, to do it in one shot is incredible.”

As Smith himself said after the shot, it didn’t matter, since his Pacific team was already up on the other three Conferences with 3 points to 1 for each of the Metropolitan and Central and zero for the Atlantic. But hey—it was a spectacular and heart-warming moment.

As has been said here before, you East Coasters really don’t have enough knowledge about what’s happening out West. The fact that anybody could question Drew Doughty as Norris winner is enough to prove that. But another one who’s often overlooked is Cam Fowler, and so it was good to catch up with him after the competition to hear what he had to say.

He’s well-spoken, and he was glad to be a part of things. He said, “It was great to see the best players in the world do their thing. I had a great time. It was a lot of fun.” He went on, “I was told to try and enjoy everything that goes along with All-Star weekend. I’m a pretty happy-go-lucky guy in general, but being here and getting to experience this with my family, it was hard not to smile. I was really having a good time out there.”

Fowler also confirmed that Ryker Kesler is a grade-A kid. “He’s a funny kid. You could tell he was a little nervous about going, he had a little nervous energy, but I think it’s awesome for Ryan to have that father-son moment with him. What little kid gets the chance to get in front of 20,000 people and shoot on one of the best goalies in the world? I was happy for him.”

He was affable about the boos that greeted him when he came out for intros. “I expected boos, but they were a little bit louder than maybe I expected, but it made it better that it was everybody. The Sharks guys got them, the Hawks guys. I knew it was coming. These fans are passionate, but no hard feelings.”

He did add an interesting tidbit. He said that, “I sat next to Drew [Doughty]. . . . I wanted to spend some time with the Pacific D men. I have a lot of admiration for those guys, and what Burns is doing this year is, in the modern day, unlike anything we’ve seen with his offensive production. You’ve got a guy who’s always talked about in terms of the Norris trophy and one of the leading minutes guys too in Drew. I look up to these guys, and to be able to be here now and representing the Pacific is pretty cool, but those are two guys I wanted to talk to and hang out with a little bit.

Something I don’t think I worked in yesterday was this: Gretzky is resolute in his pronouncement that Sidney Crosby is the best player in the game today, and that he’s going to hold that position for a long time.

The NHL was more than hospitable to IH, giving me a great spot in the auxiliary press box that puts me close to the action. My mom taught me to say thanks for what people do for me. Thanks, Mr. Bettman and the people who set these things up.