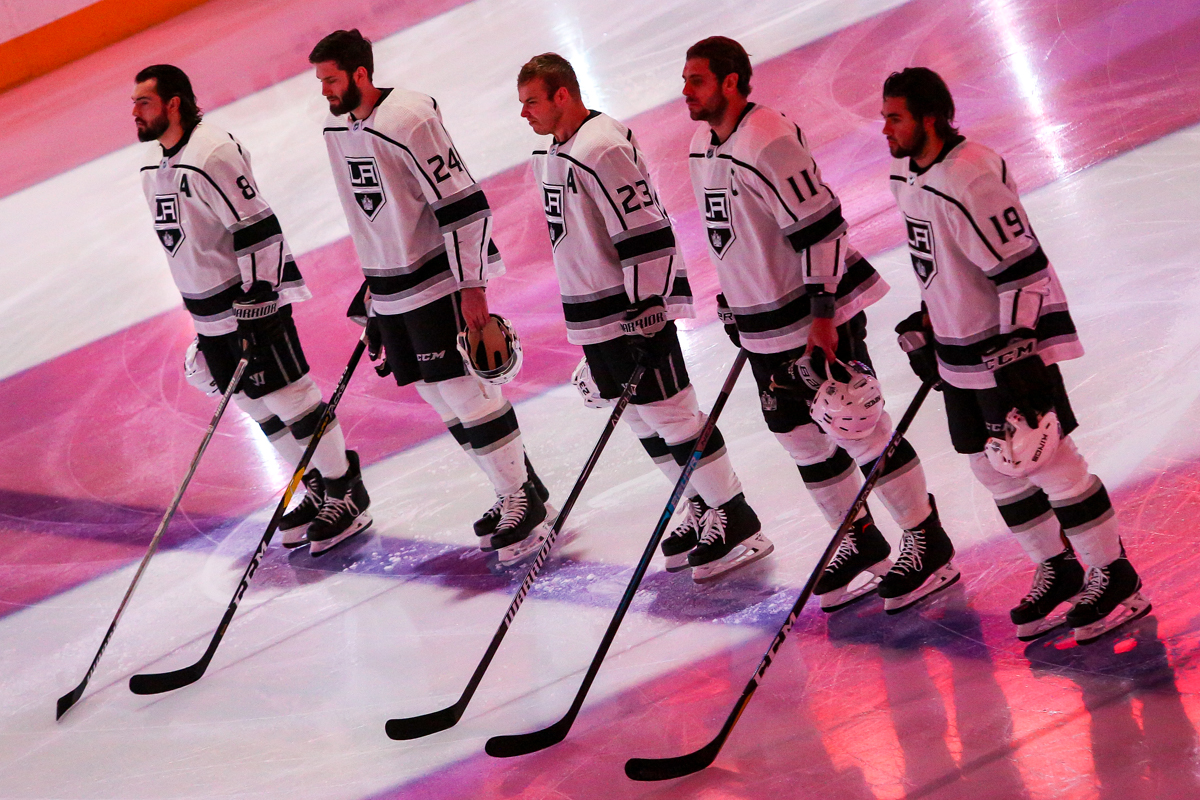 A tale you may have forgotten from the prior decade: That time the L.A. Kings and New Jersey Devils found themselves in the Stanley Cup Final.

It was the 2011-12 season. Steven Stamkos scored a league-leading 60 goals, but his Lightning managed just 84 points, tied for third in the now-defunct Southeast division with the Winnipeg Jets (yes, really). Elsewhere, the Coyotes and Panthers won their divisions. Highlighted by a 39-year-old Ray Whitney and journeyman, Tomas Fleischmann, playoff hockey was abundant in the Sunbelt. Henrik Lundqvist would finally win a Vezina in the same season that he’d share the league lead in save percentage (.930) with Mike Smith (again, yes really). Michael Ryder netted 35 goals that season–28 at even-strength, only four others did so more. For all that, perhaps nothing was as strange as the 2012 Final.

The Devils entered the season with new head coach, Pete DeBoer and returned to a tandem of Johan Hedberg, 38, and Martin Brodeur, 39, in net. Travis Zajac, the unquestionable top center, was sidelines for the first two and a half months and the team struggled to find a stable puck-mover on the blue line until the arrival of Marek Zidlicky days before the trade deadline. Even with a healthy Zach Parise and Ilya Kovalchuk, New Jersey managed a fourth-place finish in the division, though good enough for sixth in the conference. They’d survive a seven-game first round against the aforementioned Panthers, needing double-OT heroics from a rookie Adam Henrique to send them on to eventually play their division rivals in Philadelphia and New York, respectively. The Flyers went down in quick order–needing just five games for N.J. And while the Rangers were the East’s top-seed, they couldn’t solve Brodeur, who turned 40 just prior to the series, and were ousted in a sixth game across the Hudson.

The Kings added gritty veteran center, Mike Richards via trade with Philadelphia. And when Jeff Carter decided his 16-game tour with Columbus was too much, he too found his way to L.A. In between the Flyer reunion, the team let go of head coach, Terry Murray and replaced him with Darryl Sutter. The Kings finished the regular season as an eighth seed, but were unphased by that in the postseason. They took down reigning Western Conference champs, Vancouver in five and dissembled the 109-point Blues in a sweep. They’d nearly do the same to the ‘Yotes in the West Final, needing five to bring them to their first Cup Final since the Gretzky Era.

In the final confrontation, the Kings found enough offense out of Anze Kopitar, Drew Doughty and captain, Dustin Brown, to match the stellar play in net by Conn Smythe-winning goaltender, Jonathan Quick to sport hardware in Los Angeles for the first time.

Since this from the front-half of the last decade, it’s also been L.A. that has prevailed. They’d follow up the 2012 campaign with a return to the Conference Final before losing to the Blackhawks. But by 2013-14, they’d hoist another Lord Stanley against a New York Area club–the Rangers. They just barely missed the postseason in 2015 and were ousted in 2016 by the Sharks. A down year in 2017 claimed the jobs of Sutter and Cup architect, G.M. Dean Lombardi. More recently, a sweep to Vegas, their first victim in a run like never before, to the Final; Last season brought just 71 points–the clubs worst since 2008, when they earned the second overall pick, taking Doughty. It was 2012-foe, New Jersey who jumped up in last season’s draft lottery, picking first and dropping the Kings to fifth.

The latter battle seems to be the most likely to see a rematch. Since their run to the Final, the Devils have qualified for the postseason once–2017-18. Along the way they’ve had: Cory Schneider in his prime but without run-support; Jaromir Jagr and his best season since returning to North America; an MVP in Taylor Hall and a pair of first overall picks, Nico Hischier and Jack Hughes. They’ll likely be in the running for a third top pick this April.

The remnants of the 2012 Final are still scattered throughout the two respective teams. Trevor Lewis, Brown, Carter, Doughty, Kopitar and Quick still call the rink where they won their two cups home. Though that same core represents six of the seven oldest players on the Kings roster. Kyle Clifford, who had far more impact in the 2014 run, was just 20 when the Kings won it all for the first time. Now he’s 29 and as of days ago, a member of the Toronto Maple Leafs. An honest veteran head coach, Todd McLellan admitted the bond a player has in winning with teammates isn’t lost and the change has in part sucked some energy out of the dressing room.

Zajac and current captain, Andy Greene remain the only on-ice links to New Jersey’s 2012 run as the Hall-of-Famed, Brodeur works in an unidentified capacity in the club’s Hockey Ops–it remains to be seen how much that role could grow. Ilya Kovalchuk, who might have been a Conn Smythe favorite if the Devils managed to win game 6 and a phantom game 7, signed with Los Angeles in the 2018 off-season, but had his contract terminated after struggling–9 goals in 32 games between parts of two seasons.

Oh how time flies. Maybe some day we can talk about Alex Turcotte and Hughes, friends from the US National Development Program, facing each other in another Kings-Devils Cup Final.