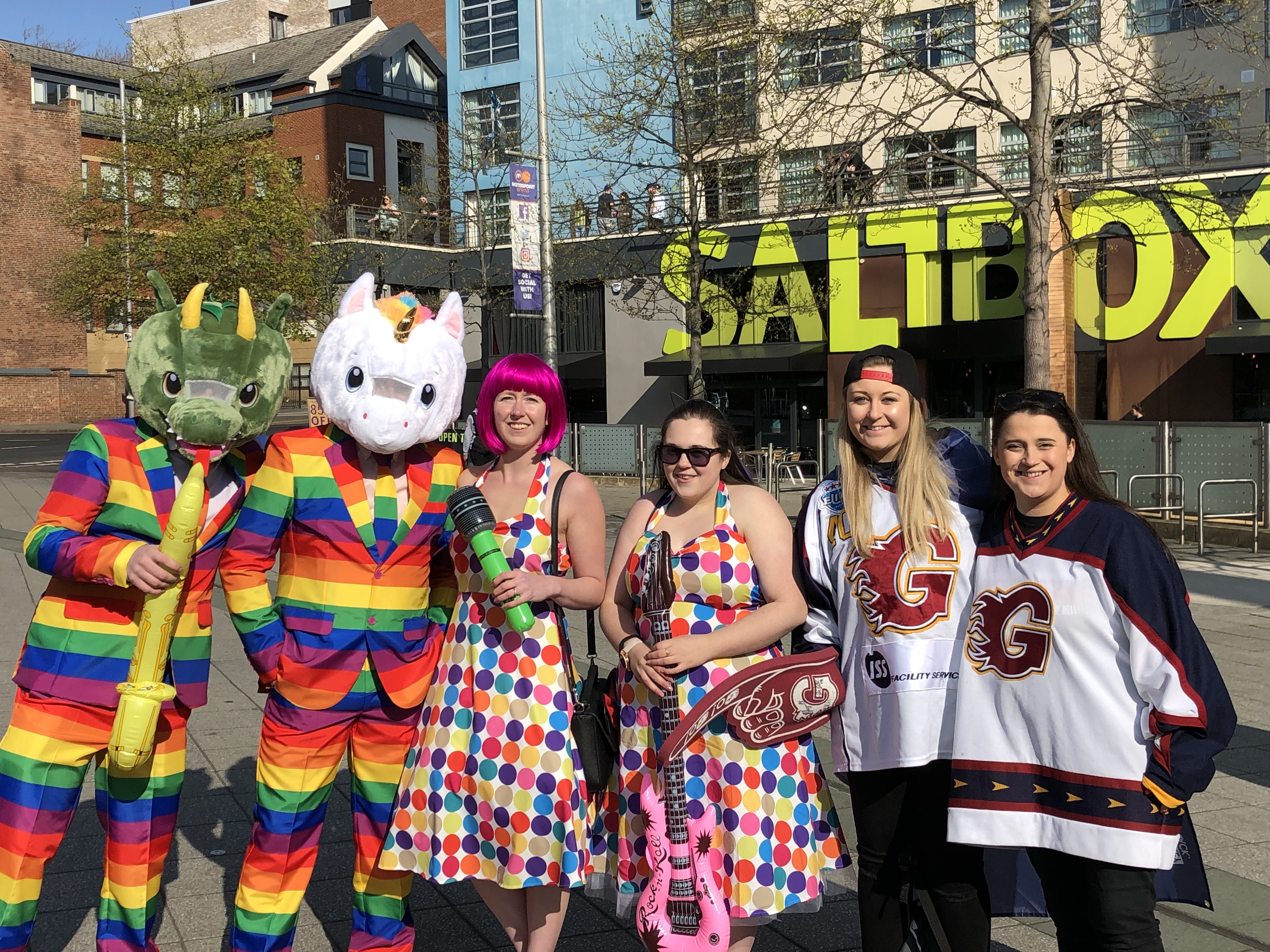 Reason to Be Here

The first folks I spied when I arrived at the Motorpoint Arena in Nottingham were exactly the sort I wanted to find: passionate fans all decked out in costume, and looking unlike anything I’ve found in an NHL arena

Six people, six stories. As you look at the photo framing this piece, you have Rob Salmon, Matt Wilks, Rachel Wilks, Hanna Sanchez, Alex Kalisz, and Emma White. The two Guildford fans, obviously, are into hockey. Their sweaters show that, as well as the fact that they were up at 4am to work Friday, then after their bread was won, they got on the road for seven hours to be in Nottingham. Why not make the full effort?

And they’re not just here for entertainment. They’re here to see their team, which they are passionate about, and knowledgeable about. Witness this: Alex is originally from Nottingham, but she moved to Surrey, and they didn’t have a team in the same league initially. “Guildford Flames came up to the Elite League last season,” she explained, “so we started going to their games. I got behind them a bit more than the Panthers. I’m regarded as a bit of a traitor,” she adds with a laugh.” She pays about 16.50 pounds for a game ticket at home. This weekend? “I think it was 80 quid, 90 quid,” she says. Love doesn’t count costs. But that’s four games, with each team playing twice.

As I was later to learn, the fans of all four teams, plus those of others, were in the arena, dutifully sitting in blocks, making things exciting by cheering.

Alex knows her team. She told me that the imports (non-British players) numbered Canadians, mostly, then two Swedish players and a couple of Americans. She said that most of the teams have NHLers, such as Chris Stewart of the Nottingham Panthers. She named some others, too, including Jim Vandermeer.

These fans watch NHL games, they said, though most of them start at 3am. Devotion. I didn’t catch which NHL teams they like the most. Why does that matter when they’re here for the Flames and the Panthers, though?

Alex’s drive to the weekend’s games was about 300 miles. She’ll see two by Guildford, as mentioned above, though whether one is a final for the win was TBD when we spoke. Saturday’s games are semi-finals. The two losing teams still play Sunday—in a consolation game.

The other four are Nottingham supporters who are also anxious to represent the LGBTQ community at the weekend. They explained their deal: “We’re Panthers fans, but we wanted to support the LGBT community in England.” They live about 45 miles outside of Nottingham. They knew, even early in the day, that their support from what is called “Block Seven” (a section of seats) was going to be crucial. The Belfast Giants were figured to take the Guildford Flames in game one. Game two—Nottingham versus Cardiff, was anyone’s to win.

Explaining the arena architecture, one said, “They have a block for each team, with some open blocks,” one of the guys told me. He also said that the arena experience is more organic. “It’s probably safe to say that we work with each other to make more noise. Where we normally sit, we try to get the whole crowd going around the arena.” There’s no script. “We just go with the flow. Having the whole arena full in every team because you’ve got allocated blocks, everyone’s going to be competing with each other to see who can be the loudest.”

As I would see during the game, the cheers were many. “We are number one, yeah, we are number one” was common. “Guildford, Guilford clap/clap/clap” was another. “Gi-ants, Gi-ants” echoed back.

One new one to me, “Get into them. Get into them.” I had to have this interpreted to me by BBC reporter Phil, sitting next to me in the end-zone press box. It means, he said, to play a hard game, lean into the other side a little bit. Other than some spirited checking and a bit of a scrum at the end of the game, there was little violence. And even then, the arm-swinging, gloves on, to end the contest didn’t signify much.

The game was ended in what I can only assume is traditional fashion. The players shake hands with the other team. Then they shake hands with the referees and linesmen (!). They then kneel in their ends (the losing team—Guildford. Not sure if that’s universal) and player of the game awards, one per team, are given. Both goalies got these. Then the losing team parades around the ice, first saluting the opposite fans, then their own. The winning team then does the same, first with the other side’s fans, then their own. On this afternoon, the Guildford fans’ hopes notwithstanding, the winner was the opponent, Belfast.

Hopefully, Alex still had a great day, and maybe she would see her team win the consolation game on Sunday.