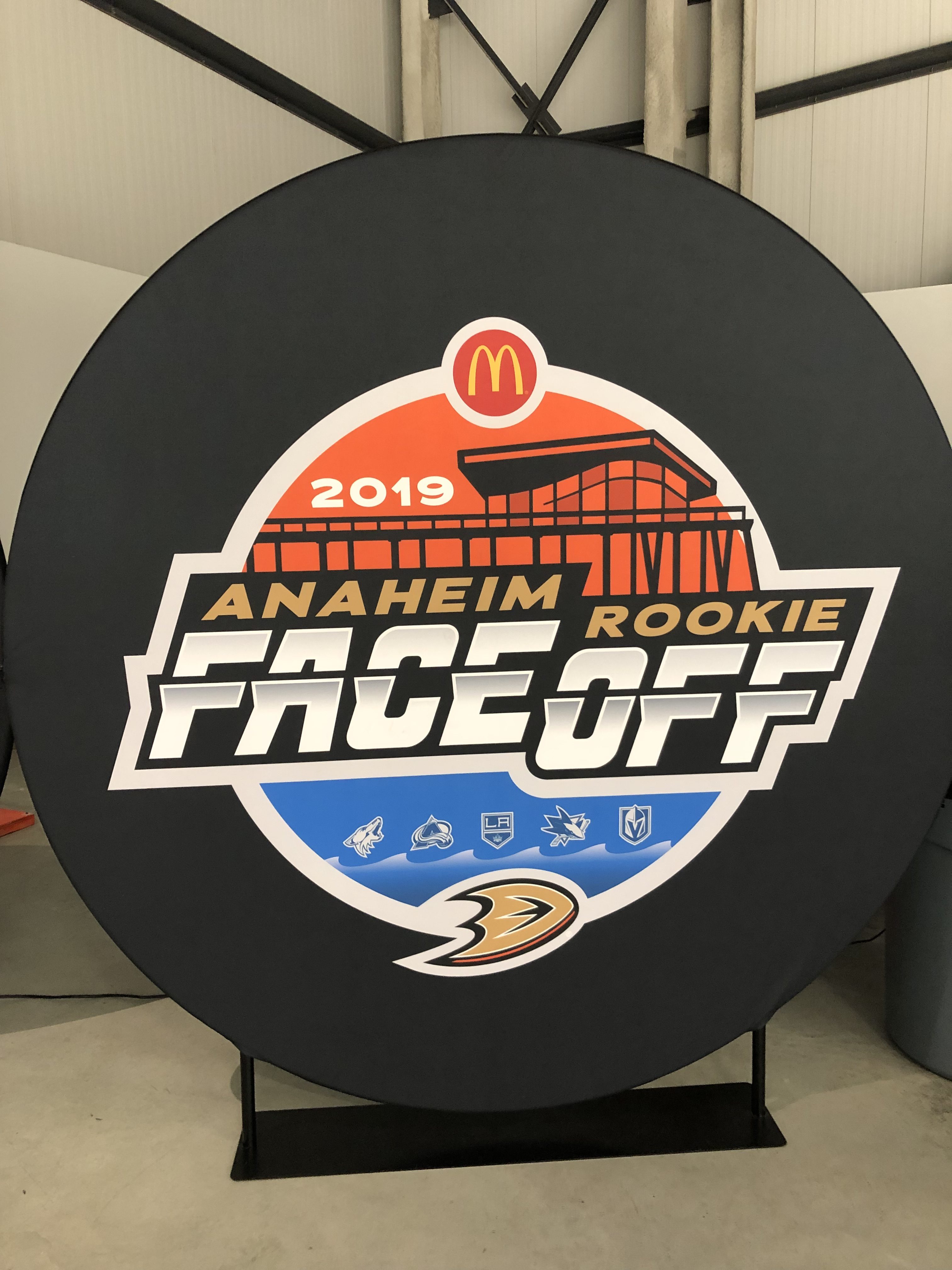 Ultimately, it doesn’t matter who wins these NHL rookie tournaments. Heck, it doesn’t even matter who wins the individual games. The Ducks, for instance, went 2-0-1 in the three games of the nine-game set they played while hosting the Sharks, Kings, Avalanche, Golden Knights, and Coyotes in Anaheim from Saturday until Tuesday late in the day.

An instance that shows that it doesn’t matter who wins: there was no pre-scouting. Instead, the Ducks tried to focus on their group, not worry about the other teams. And the benefit, as the Ducks tournament coach, Kevin Dineen, pointed out, was more about the future than the present. And the future starts Friday. That’s when the NHL Ducks open their NHL camp, and the fact that they had a good handful of players with NHL experience at the rookie camp mattered, because each of them goes into the NHL camp more ready than he would otherwise be.

Dineen said after Tuesday’s wrap-up game, “I think they’re ready to roll. I think you even have a little leg up when you’re playing the rookie tournament because you’re used to a lot of summer skates, a lot of drills, but I don’t think you can in any way replicate going out there and playing a real game like it was. Every game was really competitive, and I think that’s a great way to walk into camp.”

Dineen wouldn’t name any one person who stood out, but he said that the group of prospects is strong. “There’s a skillset that goes beyond just pointing out one guy. There’s some offensive skill in there, but I thought our goaltenders had a really good showing this week, and some of the D stood out as well.”

His overall impressions were summed up this way: “I think the future is bright. I think you get a bunch of guys, and I’ve seen this in the past, the scouting here is, they’re putting good players in the system, and that depth is exciting. Some of these guys showed very well this week. They now get a chance to recharge before they hit the ice on Friday, but I thought it was a really solid showing by our group as a whole.”

You can’t put a ton of stock in any one moment in these games, of course, but here are some that stuck out as important, randomized from various of the six teams:

For the Coyotes, Jan Jenik can pick his spots well, shooting to the opening almost every time. The velocity of the shot could be improved, but that’s true of a lot of these guys. Too bad it’s too late in the summer to get the weighted pucks out and work on this in the driveway.

Jenik is from Nymburk, Czech Republic, but he’s no shrinking violet. He and Josh Anderson got in a real punch-up in the game versus Colorado  on Tuesday. Bam-bam-bam went one. The other then took his turn.  It wasn’t the only scrap. David Levin of the Coyotes and Josh Dickinson got into it later in the third period. The game was quite testy in its latter half.

For Colorado, Nick Henry, late of the WHL (Regina and Lethbridge last year—94 combined points), knows where to place a puck. He rushed it shorthanded and held it a long time before shooting off the goalie’s shoulder so that a teammate could grab the rebound. Too often, these players lob it right into goalie’s gut. The advantage of the shoulder is that the puck bounces off the hard, protruding pad there, and it’s difficult for the keeper to control it.

Also on the Arizona side, Kelly Klima showed good hustle. On one sequence, he was hauled down splitting the Avs’ D, still managed to get the puck back to a teammate, then pulled off a hard back-check on a guy who was rushing the puck towards the Arizona net.

In game two of  Tuesday, the Sharks opened up a five-goal lead on the Kings before the LA team pulled back to three goals different. The game ended 7-3 for San Jose. The best line for LA was what was listed as their fourth line (go figure), which was Brad Morrison on the left, Aidan Dudas centering, and Joseph Garreffa on the right side. Dudas had 62 OHL points last year for Owen Sound, Garreffa 87 with Kitchener.

In fact, I tallied up the points from last year on each of the six teams as they iced their lineups Tuesday. Every team had at least five guys with at least 40 OHL or USHL points. Most had more than that, and there were a number of eighty- or ninety-point players sprinkled through the tournament.

That’s no guarantee of anything, of course, and it’s easy to name players who were that productive in Junior and never made the NHL. That any do is a product of keeping the flame lit.

Sam Steele of the Ducks (he played 22 NHL games last year and scored 6-5-11 points), put his finger on it: “In Junior after a while, it gets harder to pick those points [that need work] out,” he said, “because you’re playing against younger players as you get older. Once you hit the pro level, you really see what you need to work on. I think I did a pretty good job working on those things this summer.” He named power and “being able to create space” as his targets. He said part of that comes from the gym, but also, “On the ice, knowing times and reading situations.” He said, “Spending a pretty good of time in the NHL [last year], I felt like I got more comfortable as I went on.” He’s ready for the fall, he indicated.

Back to the Kings: Blake Lizotte looks to be the master passer of the group. He had three assists coming into Tuesday, and added at least one more during the Sharks game.

San Jose, which won all three of their games to win the tournament, has Danil Yurtaykin of Belovo, Russia, who played in the KHL last year and is 22. He snapped off a beautiful pass to Artem Ivanyuzhenkov, another Russian, who played in the USHL last season. Ivanyuzhenkov is 21, and big for a forward at 6’3” and 235 pounds, but he’s smart and speedy. Anyone worry about who might replace a certain large, two-million-dollar center when he (Joe Thornton) retires? Ivanyuzhenkov is currently playing on the left wing.

The Ducks, as I’ve mentioned, played an NHL-heavy lineup. Their power play, particularly, was all-NHL at one point—Lundestrom, Comtois, Terry, Steele, and Mahura each notched games in the big league last year. They all looked strong, but Steele and Terry have to be the standouts.

Terry scored a couple of times Tuesday. Once was on a loose puck that drifted toward the Vegas end. He swooped down on it and put it in with a deke and a soft backhand that went under the goalie. He tried the same move in period two to no avail, but got his second one on a shot where he was fading across the slot left to right and put it back into the open side. Clever.

Terry commented after the game on how he felt coming into this year. “When I came in [last year], I had people telling me, ‘You can play in the NHL,’ or, ‘You can be a good player at the NHL level.’ And going into camp last year, I thought that maybe I could be, but I didn’t know what to expect, and I was unfamiliar with the systems, and I didn’t know the guys that well. I had a coach that, that’s the way he was—you wouldn’t hear much from him. It took me a while to feel it out, but now I’m coming into camp with a lot of confidence, and it’s not like I could be an NHL player, but I definitely know I can be, and I’m excited for the opportunity to earn a spot.” He played 32 NHL games last season, netting 4-9-13 points.

He added, “You can’t appreciate how fast and how good the players are at that level until you experience, it, and it was unfortunate how the season went last year for Anaheim, but it gave a lot of us young guys a chance to test it out, and realize that we’re ready, and that we can play. I think there’s a lot of us that have that confidence coming into this year.” A handful could be on the opening night roster.

Steele got the last goal (bar an open-netter) for the Ducks with a play where he held the puck going  around the net and shot into the open side. He was asked whether he’d seen Kakko’s play from the east coast rookie camp on Monday. “Yeah, somewhat I did,” he said. He didn’t elaborate.

“You play some pretty intense hockey,” he said, “It’s good to be a part of two wins.” He said that he feels like the rookie camp got him ready for pro camp later this week.

To return to that closing game, Vegas forward Paul Cotter, a Michigander who played for the London Knights last year, gave up a puck on a deke where he tried to put it past the defense by surrendering it and trying to get it back. Creative, but it didn’t work. Do you fault that? The Golden Knights lost all three of their games, and they were roundly outscored doing it.

Dineen put some perspective on all of this, commenting that “A lot of our team were very generous with the puck this week, so we’d like to see them a little more mentality of putting pucks towards the net and shooting the puck, to create some offense. . . .  I think the best things we can keep working on with our group as a whole is our shot mentality.”

In other words, this tournament in itself doesn’t much matter. But getting guys ready for pro camp, especially on a team where spots are truly up for grabs, is helpful. That the host Ducks showed well is just a bonus.

Give Troy Terry the last word: “You can see the level of commitment to hockey that this shows for the [Anaheim] fans. It was an awesome weekend. Tuesday at three o’clock, and all of us are doing our best to make sure we’re ready to play, but you know, when we come out, and we see fans here, we didn’t know what to expect on Tuesday at three, and we saw fans here cheering us on. It gives all of us a big boost.”

Please read my books. Growing Up  Hockey  is the classic. The others aren’t bad, either.