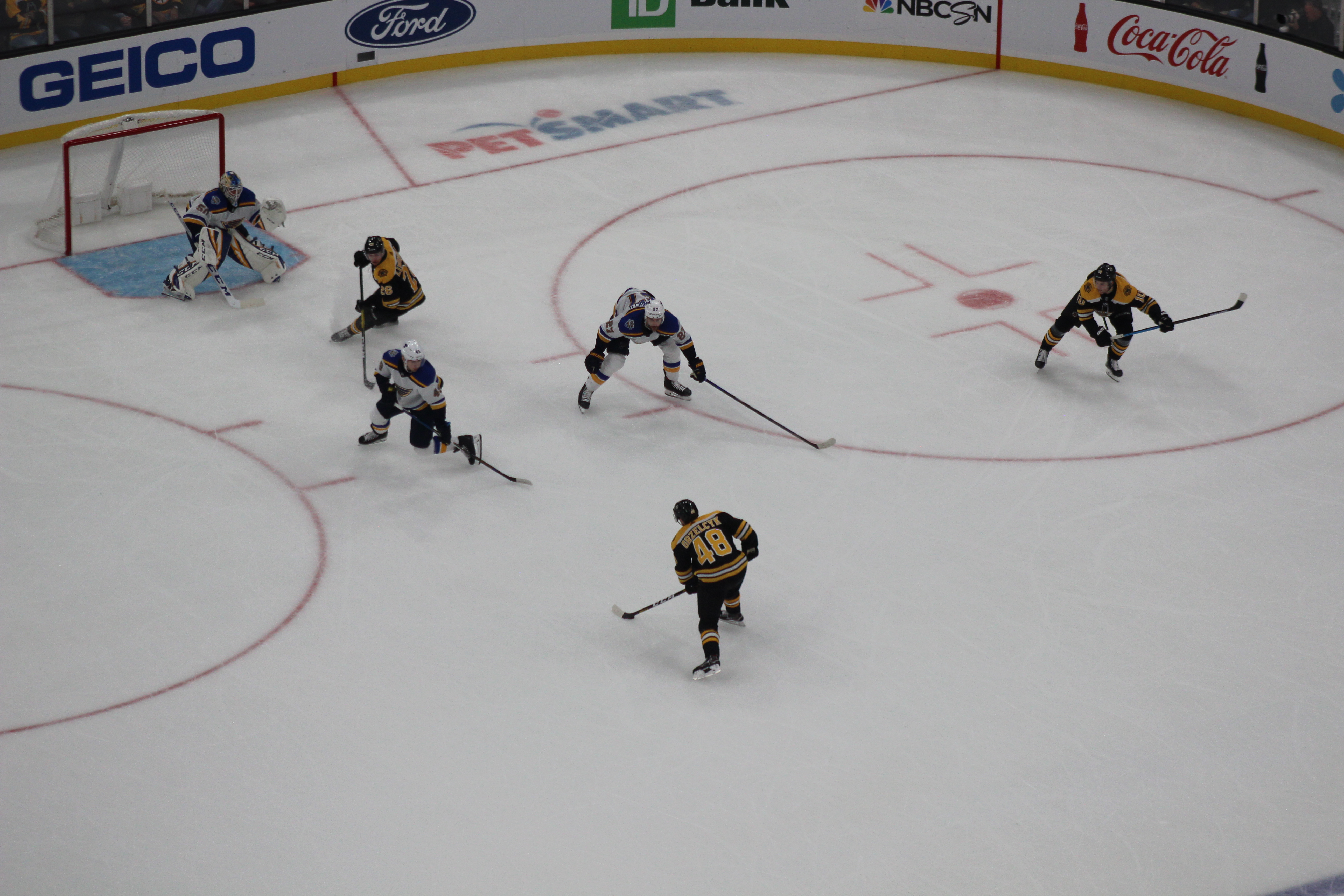 Boston, MA — The last time St. Louis visited Boston the Stanley Cup was on hand for the victor. Tonight the only thing waiting for either team was a flight to tomorrow’s game destination. Despite the lack of trophies on hand, the two teams have each been playing exceptional hockey throughout October. The Blues entered the game riding a two-game winning streak while carrying a 5-2-3 record. The Bruins meanwhile won their last game and possess a record of 6-1-2.

Play was physical from the opening puck drop. Zdeno Chara quickly re-introduced himself to Oskar Sundqvist when he buried the Swede at the St. Louis blue line. A scrum ensued and the game’s first penalties were called. Roughing for Chara and the Blues Brayden Schenn at: 38. Neither team gained control during the ensuing four on four.

The physical play continued to flow up and down the ice while almost six minutes ticked off the board without a whistle. At 6:13 Torey Krug and David Perron were assessed penalties. Krug for Holding The Stick and Perron for Roughing. Sundqvist had the best chance of the four on four play when he raced in alone on Tuukka Rask, but the Bruins goalie blockered the shot away.

Perron was again penalized, this time for Holding at 14:08 putting the NHL’s best power play on the man advantage. To this point, the Bruins hadn’t mustered much offense, but it only took: 51 seconds for the hottest player on the Bruins to put them ahead 1-0. Standing just above the right face-off dot David Pastrnak one-timed a Krug pass through the legs of Blues goalie Jordan Binnington, who received the loudest chorus of boos from the Boston faithful during introductions.

Sean Kuraly was whistled for Cross-Checking at 15:49 giving the St. Louis power play their first opportunity. The Blues only managed an Alex Pietrangelo shot from the point that was directly at Rask.

Sundqvist put the Bruins back on the power play at 18:12 when he was called for Tripping. Bruins forward Jake DeBrusk tipped a shot just wide of the goal before the first period ended. The Bruins outshot the Blues 10-9 during the opening 20 minutes.

The second period was decidedly slower. A quick breakout for Boston was the difference in the middle frame. Connor Clifton took a hit from two Blues, Sammy Blais and McKenzie MacEachern, as he chipped the puck from the Bruins zone red line where Anders Bjork caught the pass, dished to defenseman Matt Grzelcyk, who then fed it back to Bjork for a one-time bomb that beat Binnington high, glove-side for the 2-0 lead at 9:31.

Shortly after, Torey Krug was sent off for Hooking at 9:42. St. Louis had their best pressure of the game thus far but Rask was a wall in the Boston goal as he stopped repeated chances by Ryan O’Reilly, who was camped out in front of the Boston goal during the power play. Sundqvist’s second penalty, this time for Boarding at 12:06 almost resulted in Patrice Bergeron adding to the lead if not for a solid save by Binnington. The penalty killers for Boston, Bergeron, Marchand, Chara, and Brandon Carlo were on the ice for the entire short-handed situation.

After the penalty had expired Sundqvist and Ivan Barbashev had a two on one chance against Chara, that was broken up by a hustling Charlie Coyle on the backcheck. Grzelcyk was called for Interference at 19:17. The period ended with the Bruins maintaining their lead in the shots on goal department, 19-16 overall, 10-7 for the period.

The third opened with the St. Louis power play carried over but the Blues were unable to mount much of an attack. At 4:02 St. Louis defenseman Colton Parayko was sent to the penalty box for Hooking. The most action on this power play was when Blues captain Jay Bouwmeester cross-checked Pastrnak into the goal post face first. There was no call on the play. At 8:22 Krug was whistled for his third penalty of the night on a Holding call. St. Louis’ Perron had a nice give and go opportunity with Tyler Bozek, but Rask gloved Perron’s wrist shot.

With the Blues buzzing, Chris Wagner blocked a Pietrangelo blast, then had to limp off as the Bruins cleared the zone. When the Blues re-entered, Perron had a wide-open net to shoot at as Rask was caught on the other side of the crease, but Charlie McAvoy was able to get the shaft of his stick on Perron’s shot.

At 19:12 with Binnington on the bench for the extra attacker, Boston’s Carlo chipped the puck out of the defensive zone all the way down into the Blues empty net sealing the win for the home team, 3-0. St. Louis outshot Boston 10-5 for the period and 26-24 for the game.

“I think we defended in a way that they (St. Louis) didn’t have a whole lot,” Tuukka Rask said. “A couple of times, they hit a seem but we’d block it or they’d miss the net. Blocked shots were great. When you take the other team’s time and space away, don’t give them options, that helps everybody.”

Rask got a bit surly when asked when this game went from being a revenge game to just another game. “Unless they brought the Cup here for this game, I don’t think it has anything to do with it. Different year, different teams. But it was two good teams so it was a great Saturday night game.”

St. Louis travels to Detroit to play the Red Wings tomorrow at 5:00 pm, while the Bruins head to New York City to take on the Rangers at 7:00 pm.