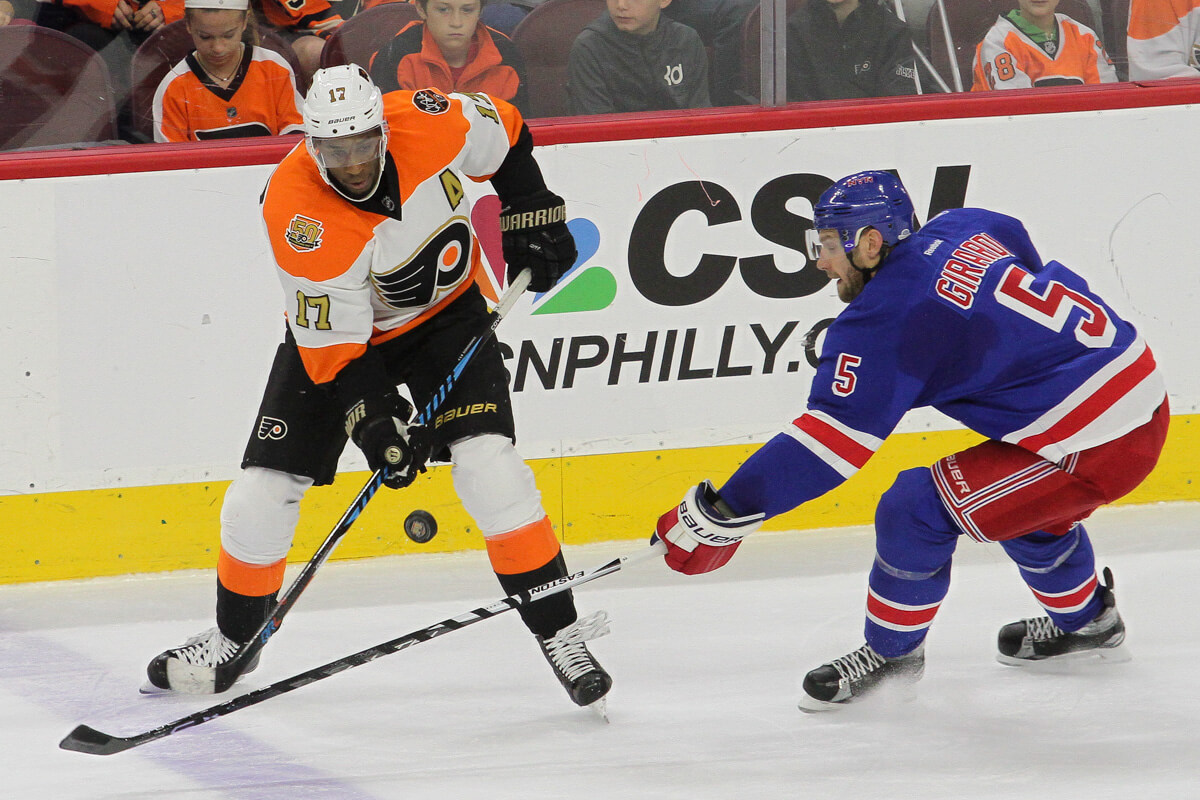 Rangers Go into Break on a loss; Blanked by Flyers 2-0

NEW YORK – Wednesday’s game at Madison Square Garden between the New York Rangers and Philadelphia Flyers was a game of dominance for the Rangers and yet they were shutout by Steve Mason 2-0. It was also a game decided by special teams; an area that usually is good for the Rangers as well. In the last fourteen chances the Rangers have not scored a goal on the power play and went 0-for-3 against the Flyers and it was the difference maker. Wayne Simmonds of the Flyers scored on the first power play chance the Flyers got and it was the eventual game winner.

In the prime time game of the week, the Rangers shot out of the gate and dominated the opening twenty minutes by firing away 16 shots on goal. Mason stood tall making some spectacular saves and bailed his team out on a disastrous road period. The second period was much of the same, the Rangers found chance but Mason was a brick wall. Not bad for a guy who came into play with a 15-15-6 record and a save percentage of .899. The Flyers did have their chances as well and once again Henrik Lundqvist was sharp. His last four games have proven the critics wrong and stood on his head as he’s done for all 12 years here.

The Blueshirts may have gotten a little too fancy with one too many passes but each of their chances were of high quality, they just couldn’t solve Mason. During this stretch of games leading up to the All-Star break, the Rangers have found themselves in close games, something we haven’t seen in quite sometime due to the fact the Blueshirts are one of the top teams in scoring goals.

The three game winning streak was snapped and the Rangers will go into the All-Star break with a record of 31-17-1 (63 points) sitting in the first wild card spot in the Eastern Conference. The Rangers are better at the break this year then last year (27-17-5). This is their second 5 day break this month and only Ryan McDonagh is going to the All-Star game so the team will rest some more and get healthy.

As for Lundqvist, who continues to improve his game after a brief stretch of miserable games stopped 24 of 26 shots he faced in the contest. He has allowed two goals or fewer in each of his last four appearances, posting a 3-1-0 record, along with a 1.50 GAA, a .945 SV% (104 saves on 110 shots), and 1 SO over the span. For Lundqvist, he will also have to wait just a bit longer as he vies for 400 career wins (4 away).

The King was asked about what he expects to see from his team after the break and he went on to say, “A lot of the things we’ve been doing lately.  I think defending better, we’re doing that.  We’re focusing on a lot of different things in our game to help the team to have success.  You look at our record; I don’t think we should change too much.  It’s going to come down to determination every night, wanting to win every game and pay the price, because as you go down the stretch more and more teams are going to have that desperation and you’re going to have to match it.  The difference between the teams is not very big, so it’s just the mindset.  We definitely have the skill and we have the structure to be a really strong team, and then it comes down to that desperation, and we have that.  So we will go and enjoy the break and go for the push here.”

It is certainly one of those games in which you felt you did a lot of good but execution just wasn’t there and head coach Alain Vigneault touched on that after the game by saying,“It’s all about our execution.  You’ve got to handle the puck, and we didn’t handle the puck.”

“I thought the guys competed real hard tonight, they came ready to play”, Vigneault went on to say.  “I felt we set the tone early, and had some broken opportunities.  We played the right way, and there’s no doubt that tonight our power play struggled a little bit.  We had a lot of opportunities.  Our five on five play was good.  We had an opportunity to clear the puck on their goal on the power play.  Grabs [Michael Grabner] had it right on his stick, and I think they got a bounce off Grabs again.  It’s the type of game where you feel you deserve more, but there’s some games like this.”

In regards to where he felt his team was through the first 50 games on the season the coach touted the youth and speed, “We’re a team that definitely added some youth, and added some speed.  And the further [into] the league we’re in, talent has no age.  We’ve got some talent on this team, and we’re trying to put it together.  We’re trying to improve on a daily basis, and that’s what we’re going to continue to try and do.  It’s a tough league, it’s a league where you’ve got to battle every night.”

At one point the power-play was a successful tool for the Rangers but has struggled as of late. When asked about what’s been going wrong Derek Stepan went on to say, “The last few games you could argue a number of things in why it wasn’t working. Tonight, I thought we worked extremely hard and we got the same results. Power plays, it’s important to have swagger and you have to go out and work hard. Sometimes you have to get a bounce.”

So here we are, the last full break for the New York Rangers before they open the second half right back at home against the Columbus BlueJackets. A time to rest and recharge and get ready for the grueling push to the playoffs.