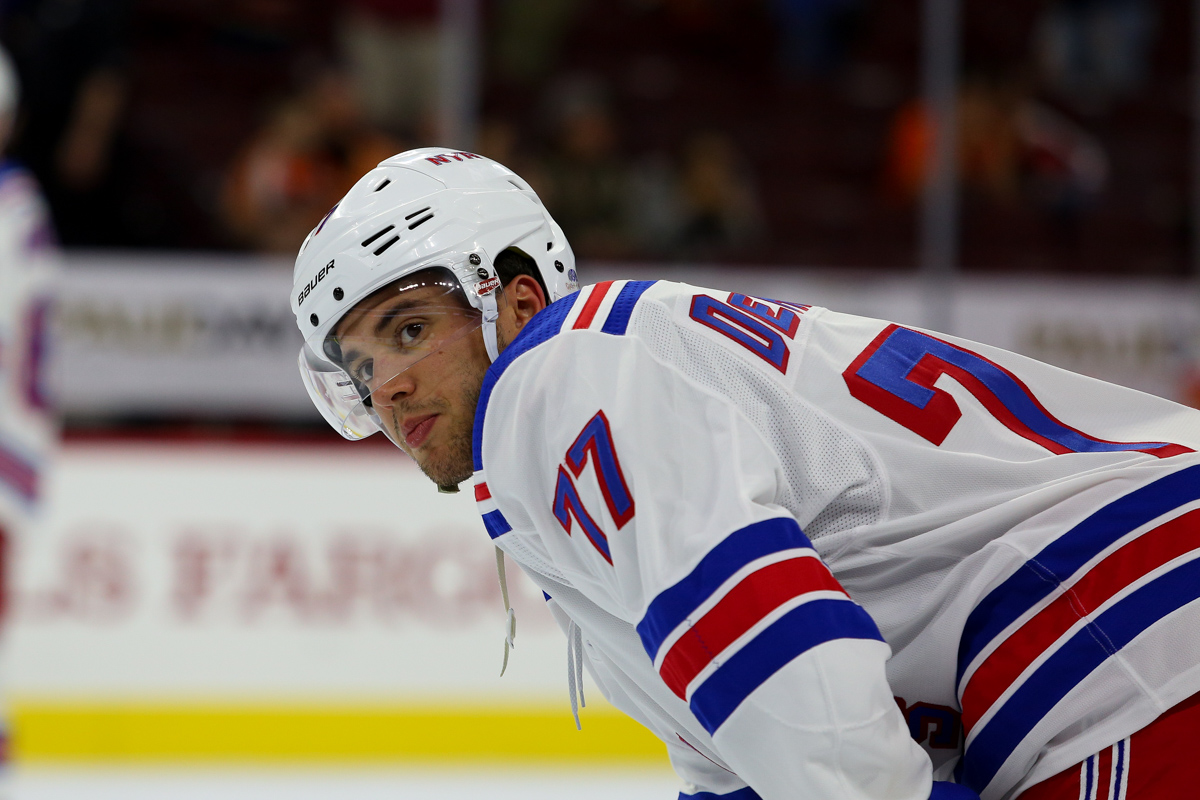 New York – How long? How long can general manager Jeff Gorton let this continue. Fans are growing impatient and players are getting frustrated. Another lackluster effort from the New York Rangers as they suffer defeat; this time from the San Jose Sharks 4-1. The record now stands at 2-6-2 (6 points) on the season. Just when you thought the Rangers might have been turning a corner on a big win against the defending Western Conference champion Nashville Predators on Saturday, it all came crumbling down once more. Patience is running out and a change needs to happen. It sounds like a broken record at this point, but its time for Alain Vigneault to go. There is no sugar coating it anymore.

It was a flat effort from the start and nothing was generated. Some brief moments of flash, but nothing after that. What is there possibly to write about how bad this Rangers team is? There are only so many of the same questions you can ask and the answers you get from the players is the same. As much as a player tries their best not to go completely rogue, you have to wonder who will slip up and just go off. Another inexcusable effort came from the power play that went 0-for-6. Sure, we can say Sharks goalie Martin Jones was that good and he was, but not one Ranger was able to put a puck in the net on six power play opportunities.

Mika Zibanejad was the lone Rangers goal tonight and even that wasn’t as energetic for him. You saw after the goal was scored it was barely a celebration. It is showing through player body language that it’s not a good room right now. No one will come out to ask Vigneault if he has lost the room, but there is a sense there. Aside from a possible coaching change, maybe the Rangers need to make a move. But what can be made? With a limited cap, the Rangers would have to move a contract. They certainly tried doing so when trading the contract of Derek Stepan away and boy do they miss him more than ever.

Henrik Lundqvist can only do so much, but in this game as well he was bad. Thankfully after a slight collision with Joonas Donskoi, Lundqvist was okay. He had seemed to flex his knee and stay on the ice for a few seconds after the Sharks player scored. Lundqvist did say after the game he twisted his leg a little bit but that was the least of his concerns right now. “It was a game where too many bad things happened”, the King said. “It starts with the deflection there on our own guy, that set the tone for this game. Bad read on the second goal, in the third we battled really hard but they scored that late one to take the momentum away from us. They play smart but in the end that mistake I made on the second goal is something that I have to do a lot better. I got caught ahead of the play analyzing what is going to happen after he puts it in front.”

When asked about this start, head coach Alain Vigneault went on to say, “We’re 10 games in here and we’re 2-6-2. Everyone in that room has got to be better than they are right now”. He believes the team he has is good and Vigneault stated in post game press conference that it isn’t the personnel, “The personnel is good, they’re just not finishing chances and are allowing early goals. “We’ve just got to play the right way. Unfortunately, right now in the ten games we’ve gotten behind, and we’ve gotten behind early. Right now, our inability to find the back of the net is hurting us, but there is definitely skill and talent in that room. We had plenty of good opportunities tonight”.

Rick Nash when asked on the level of the team’s frustrations he went on to say, “It’s high. It’s been going on way longer than we wanted it to. It’s tough right now. You could say all the clichés you want. We have to stick together and keep it simple. At the end of the day we have to give ourselves a chance to win the games.” When asked on what needs to change he continued by saying, “It’s the same thing that we keep saying, just keeping it simple, getting in shot lanes, helping (Henrik Lundqvist) out. We shoot ourselves in the foot and put ourselves in a hole, and it’s been going on for 10 games.”

How much more torture does the fan base have to go? Having so many expectations, this isn’t the way many fans thought this would be the start ten games into the season. Now they expect something to change. The Rangers were booed off the ice and that can be just the tipping point. It’s been a bit of time since the last time we’ve heard the Garden faithful call for a coach during a game and the feeling is that isn’t too far off from happening. The Rangers will have a golden opportunity Thursday when the 0-7-1 Arizona Coyotes come to town.

Mika Zibanejad tallied a goal, led all skaters with six shots on goal, tied for the game-high with four hits, and won eight of 14 faceoffs (57.1%). He has registered a goal/point in five of 10 games this season, and he leads the Rangers in goals in 2017-18 (six).

Marc Staal skated in his 699th career game as a Ranger in tonight’s contest, passing Mark Messier and Steve Vickers for sole possession of 12th place on the franchise’s all-time games played list. In addition, Staal passed Vickers for the second-most career games a Rangers’ first round pick has played with the Blueshirts in franchise history (Note: The NHL Amateur/Entry Draft began in 1963). The only Rangers’ first round draft pick who has played in more career games with the Blueshirts than Staal has is Brian Leetch (1,129).