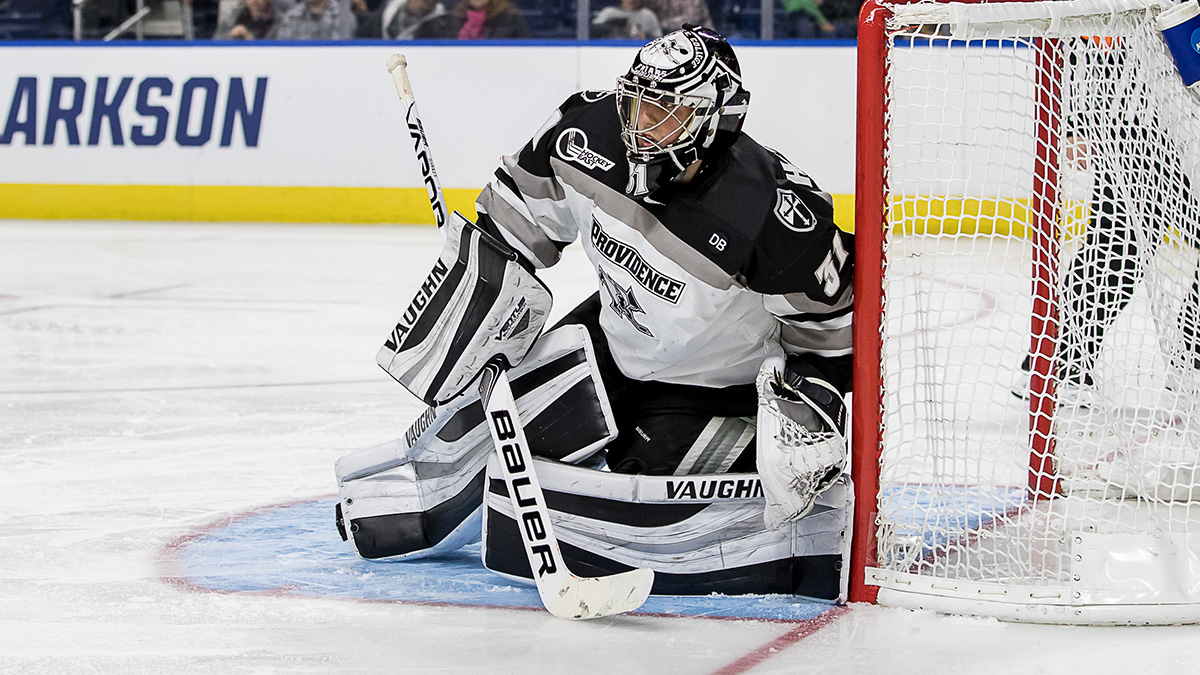 Providence, RI- Defense barely existed on Saturday night between Providence College and Boston University. One night after the Friars and Terriers traded punches, they moved down I-95 to the Ocean State and traded shots, goals, curious sequences, and concerning goaltending in one of the more entertaining games of the college hockey season so far this season.

The opening frame saw four goals scored in a 3:31 long span. Michael Callahan buried a power-play goal after Trevor Zegras took a roughing penalty. Twenty-six seconds later, David Farrance began his most spectacular night as a Terrier. The defenseman from Victor, NY, started by ripping a shot from the point. Shortly after, Tyce Thompson’s tripping minor opened the gate for Farrence’s second goal of the night. Not to be outdone, Providence flashed depth scoring to match BU’s production. Jamie Englebert cleaned a puck off the end boards for his first collegiate goal to end the first period’s scoring bonanza.

“He’s been playing well in practice,” Friar Head Coach Nate Leaman said of Englebert. “He’s got good hands. As happy as I am with the goal, with getting to the net and showing those good hands, he made three or four wall plays that were really good.”

The pace only quickened in the second period. First, BU nearly scored on a power play when Patrick Harper wired a shot from the circle. PC challenged for offsides and the officials called the Terriers off on the entry about 12 seconds before the shot. Replay review benefited the Friars mere minutes later when Max Crozier tapped a loose puck through Tucker. It appeared the official’s whistle had sounded before the puck squeaked under the former Yale goaltender and the Terriers challenged the good goal call to no avail. BU took another penalty when Farrance sat for cross-checking. On the power play, Parker Ford joined the scoring fun, capping a mad scramble in front of the Terrier net. BU wasted little time tying the game. First, Trevor Zegras potted one on a crazy rush at the Friar net. Then, after a Matt Koopman slash, David Farrance scored his hat trick goal to knot the game even at 4-4 with 7:32 left in the second. His efforts did not keep the game tied for long, though.

After Tucker surrendered the fourth PC goal, Head Coach Albie O’Connell yanked him for sophomore Vinnie Purpura. The sophomore did not inspire confidence. Tyce Thompson ended the second-period scoring with another scramble sequence to give PC a 5-4 lead at the second intermission. Early in the third, Max Crozier had his second weak shot sneak through a Terrier goalie to extend the PC lead to 6-4. O’Connell had seen enough and Purpura was pulled for Tucker. The sophomore from Lemont, IL, stopped two of ten shots.

BU rallied late. After surviving a few dangerous Jack Dugan attacks, freshman Ethan Phillips, of Dartmouth, Nova Scotia, cleaned up a goal in the crease for his first collegiate goal and BU was within one. With the goalie pulled, Providence showed their conditioning by returning to prime defensive form. They stymied the Terriers and earned a wild 6-5 victory.

BU drops to 2-3-4(1-2-3 HEA). Albie O’Connell was not happy. “Tough loss. Goofy second period. You score five goals on the road, you should win. I think we have some guys who have to learn to make tougher plays. We’ve got some young guys in the lineup. But their ears gotta open. They’ve gotta start to listen. There’s some plays being made out there that are insane.”

David Farrence recorded the first BU hat trick since Bobo Carpenter against Arizona State on January 26th, 2018, and the first BU defenseman to score a hatty since Dante Fabbro against Merrimack on January 18th, 2018. Farrance leads all defensemen in goals scored (8) and points (14) after his six-point and four-goal weekend.

BU looks to rebound next weekend against the UMass Minutemen in a home-and-home. Puck drops at Agganis on Friday night at 7:30 pm ET, and at Mullins Center on Saturday night at 8 pm ET.

Providence improves to 5-3-2(3-2-1 HEA). “Not how you draw them up, but found a way to win the game,” commented PC Head Coach Nate Leaman. “Happy with the guys being resilient. I liked the way we played five-on-six, which was a good sign because we had a lot of young guys out there.”

Jack Dugan piled up four more assists, extending his national lead in assists (19) and points (24) to six and eight over second place respectively. The sophomore from Rochester, NY, and Vegas draft pick is the early favorite for Hobey Baker consideration. Speaking on his star, Leaman noted that “…had him out there in the final minute and he looked good in that situation too. Believe it or not, what I was happiest about was that he shot the puck in the third period. He didn’t pass up his shots in the third.”

The Friars play another home-and-home next weekend. This time against Northeastern. Puck drops at Schneider Arena at 7:15 pm ET on Friday night and at Matthews Arena at 8 pm ET on Saturday night.