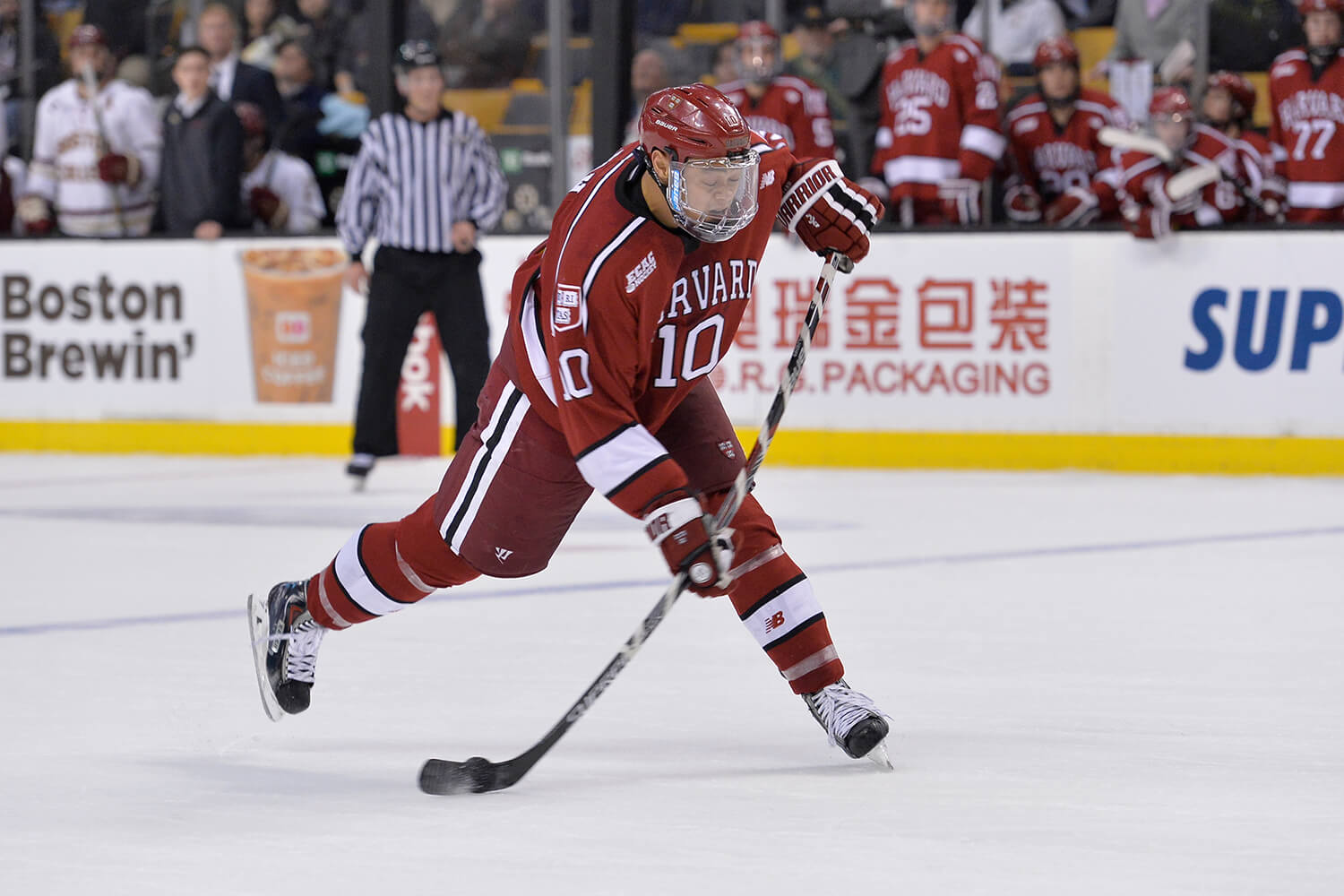 The capital of Rhode Island has served as a regular home for the NCAA regional tournament in recent years, and tournament hockey returns to the Dunkin Donuts Center once again this weekend. The weekend brings in a strong collection of teams, players, storylines, and championship dreams. Let’s take a look at the teams in the regionals and see how they stack up against each other.

This is both the marquis game of the weekend and among the most controversial seedings in the tournament. Harvard has been a dominant team all season, winning the Beanpot in convincing fashion and topping long time rival Cornell for the ECAC crown, earning the third seed in the NCAA Tournament, and they have to play Providence in what is essentially a home game for the Friars.

Many around the Harvard program were disappointed by the draw, but the Crimson players and coaches are more focused on the team in front of them.

Harvard has reason to feel ok about the matchup. They come into Providence with the nation’s top offense, averaging 4.21 goals a game. Three of their players have 40 or more points this season and another three have 30 or more points.

Seniors Alexander Kerfoot, Tyler Moy, and Sean Malone are the big scorers for the Crimson. Malone might be the most important contributor, as he finally has health on his side after a hard 2016 season.

Young players like Ryan Donato, Adam Fox, and Beanpot MVP Nathan Krusko are also important players. They’ve led Harvard to the top offense and fourth best power play in the nation. Their defense is no slouch either, with the seventh best goals against average in the NCAA.

Senior Merrick Madsen has played up to his billing as a senior goalie and a Flyers draft choice by posting a top 20 save percentage, goals against average, and the top winning percentage in the country. He’s helped out in front by veterans Wiley Sherman and Jacob Olson, and impact freshmen John Marino and Adam Fox on the defensive end of the ice. They’ve blocked shots and played the blue line as well as anyone. They helped Harvard win their first Beanpot since 1993 and claim their tenth ECAC crown.

Unlike their opponent, Providence was not an end to end competitor. The Friars struggled in the first two months of the year, barely staying at .500. When the calendar flipped to 2017, the men in black got hot, going 14-5-1 in the new year.

The Irish finished in the top five for shots per game, though only 22nd in goals per game. They landed in the top ten for faceoffs and penalty kill. They just ran into trouble in South Bend, IN against the Irish, otherwise, they’d have been at the Boston Garden for the Hockey East Tournament and earned a higher seed.

The Irish made it in and they’ll have a game just down the road from their campus. Brian Pinho and Eric Foley led the way in scoring for PC and lend veteran experience from the Friar’s 2015 National Championship team. They remain after ten players left after last season. That turnover did allow freshmen, Josh Wilkins and Jacob Bryson, the chance to shine, and they gave head coach Nate Leaman confidence in his team’s fortitude.

Defensemen Anthony Florentino and Josh Monk provide more veteran presence and physicality in front of sophomore Hayden Hawkey. The young goalie has performed well in his first season starting between the pipes, getting three shutouts and ranking in the top 20 for goals against average and total saves.

Harvard has more talent this season. Their offense is potent and can score on anyone. Merrick Madsen is among the best goalies in the nation. And in much the same way they desperately wanted the Beanpot, they desperately want the National Championship. Providence has the experience of being there in 2015, the desire to do it again, and the benefit of being just down the road from their campus.

Both teams will play a hard and physical game. Harvard will have to adjust to the NHL sized rink after playing on the Olympic sheet in Lake Placid for the ECAC Tournament. Providence is rested. This might be the hardest game to call of the opening round matchups.

Ultimately, I would pick Harvard based on skill and desire alone. Those can carry the day, and I think Harvard will have more of both. Madsen is also a better goalie than Hawkey and Hawkey have to face a more daunting task in the Crimson offense than Madsen will have to face in the Friar attack.

Neither of these teams has won a Frozen Four. In fact, between the two teams, they have only one NCAA Tournament victory. That came in 2009 when Air Force pulled a major upset over the Michigan Wolverines, winning 2-0 before barely losing to Vermont in the Bridgeport Regional Final.

Western Michigan has made five previous appearances in the NCAA tournament and has lost every single game they’ve played in the tournament. These are not historic powers, but they have played well this season. Air Force won the Atlantic Conference and Western Michigan played spirited games against both Minnesota Duluth and Denver in the NCHC tournament. The Broncos came up short both times, but they played hard against two of the top seeds in the Tournament this year.

These teams faced off earlier this season in Kalamazoo for a two-game set. The teams drew even 5-5 after the first game and Western Michigan won 4-1 in the second game. Since then, the teams have taken markedly different paths to the Tournament.

Air Force rode their defense and goaltending. The Falcons allowed the fourth fewest goals in the country and have the top penalty kill in the country, with an 89.9% success rate on the opposing man advantage. Junior defensemen Phil Boje and Dylan Abood embody what Air Force is about, a hard-nosed defensive effort. They led the way in blocked shots and set the tone for the team.

In addition, Shane Starrett is one of five goalies in the country to have a goals against average that’s under 2.00 and has the tenth highest save percentage of any goalie in the country. He has played particularly well against imposing opponents, winning against 5th ranked Boston College in November.

Their offense can keep up with their opponents too. Jordan Himley and Kyle Haak both topped the 30 point plateau and led the team to the highest point total in Atlantic Hockey. Ultimately, hard hitting defense is this team’s calling card.

The Broncos got into the tournament on their in-conference play and their offense. They finished second in the NCHC in points behind top seeded Denver, and have two 30 point scorers on their squad. Sophomores Matteson Iacopelli and Griffen Molino led the Broncos to some huge wins this season. They topped the top ranked team in the nation twice, beating Minnesota Duluth in November and Denver in January.

They’ve battled injury throughout the season, with freshman goalie Ben Blacker missing the start of the year with Mononucleosis and senior Sheldon Dries missing the last weekend. Both players will be on the ice and felt good after practice, with head coach Andy Murray in good spirits regarding his team. Blacker’s performance in particular has lifted his team and has the Broncos in a good mood after traveling to New England.

While the teams have faced off this season, don’t expect similar results to the November weekend set. Both teams are more tuned to their desired style, with Air Force comfortable to a stone wall on defense and play opportunistic offense and Denver willing to work over their opponent’s goalie infront with constant shots.

Ultimately, I think Air Force will pull the upset. The Falcons’ defense is to be respected and can carry the day against the Broncos. Western Michigan will play hard, but I think Starrett will be the player of the game for Air Force.

In the hypothetical matchup between Air Force and Harvard, the Crimson would be heavily favored and rightly so. They have the offense that Air Force can only envy. The Falcons would hang tight with Harvard most of the way, but that would be a game where Goliath would beat David. Harvard will win out and move on to their first Frozen Four since 1994.