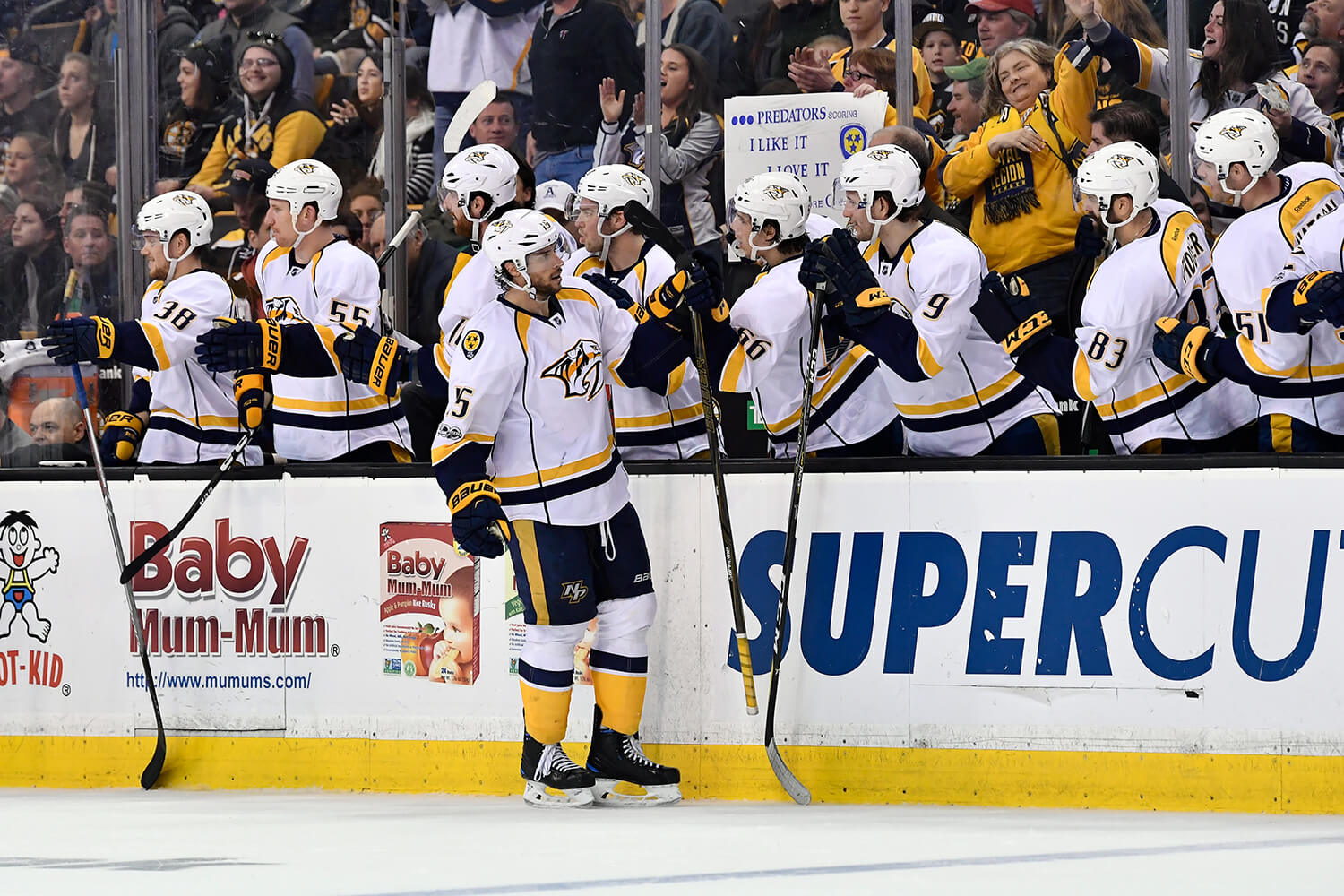 A week ago the Stanley Cup Final looked bleak, particularly for the Nashville Predators. They had succumbed to the reigning-champions with a crushing game 1 defeat and a lopsided Penguin decision in game 2. Even without Kris Letang, Pittsburgh’s star power was taking its toll on the Pred’s by-committee approach.

But like a good Nashville hangover, the hockey world was flipped on its head Tuesday morning. The series was going back to Pittsburgh–no parade just yet, no Stanley Cup to be awarded on Thursday night. That, thanks to a pair of Predator victories in games 3 and 4 where “instruments of crime” littered the Bridgestone Arena ice as the team outscored its opposition 9-2. Pekka Rinne, pulled in game 2, rebounded in the two most important games of his life, stopping 50 of 52 shots to even the series at two games apiece.

Momentum, all of a sudden is with Nashville. But momentum in any series, let alone the cup final, can’t be trusted. And with Pittsburgh returning to the PPG Paints Arena, where they are 9-3 this postseason, the balance of power could be restored before the weekend. But even with just a week to go in the 2016-17 season, there’s lots of hockey left to be played.

If it’s felt as though everyone outside the Steel City has had collective gold and blue pom-pom’s waving in the air, you’re not wrong. Yes, Pittsburgh has Sidney Crosby and Evgeni Malkin. They also have last year’s playoff darling, Phil Kessel. But something about Smashville has reinvigorated fans across the NHL.

Perhaps it was the star power off the ice, led by Carrie Underwood, Keith Urban and Nicole Kidman that has gotten the hockey world excited about the finals again after a lackluster opening. Maybe it was the on-ice heroics of Frederick Gaudreau, owner of three goals in four finals games–also his first three goals in pro hockey. Or, it might be the always-charismatic P.K. Subban.

Subban, who made a Messier-like guarantee for game 3 and brought the Pen’s captain some Listerine ahead of game 4, has been a fan favorite stretching beyond team loyalties. The defenseman, who was controversially dealt by the Canadiens to Nashville last summer, is as endearing as as anyone in sports. From his outfits and interactions with fans and media media to his off-ice persona, seldom in the league’s star athletes, it’s hard not to root for the one they call P.K.

The city itself deserves particular recognition. From its great show of support down Broadway to its array of events and concerts, its the kind of hype for a cup final that any team deserves. For this 1998-expansion team, it could also be a longtime coming. But the sea of jerseys and fandom doesn’t just end in the Music City.

It could also be something about the underdog. Something the Predators most definitely are. A 16th-seed, they’ve started every series on the road. En route to this point they swept the top-seeded Blackhawks, dispatched of division-foe St. Louis in six games and knocked off the high-skilled Ducks in six to advance to their first cup final. It’s part of a Cinderella run reminiscent of the then-Mighty Ducks in ’03. Just two games away from the franchise’s first Stanley Cup, they’ll hope to write a better end to that script, which ended with a defeat in game 7 to the Devils.

The Penguins though aren’t about to lie down. Even if they haven’t looked nearly as sharp this series, they have no shortage of game-changers that can turn games on a dime. On paper, they are the better team. That hardly matters though when both clubs are within two W’s and six periods from ultimate hockey glory. But the narrative sure is exciting.

The numbers help tell the story: Monday’s game 4 in Nashville drew a 4.14 overnight TV rating, according to SportsBusiness Daily’s Austin Karp. That figure is the highest for a cup final game in four years. And locally, the series is already far surpassing last year’s final–up 75 percent, according to a Buffalo News report. Game 4 was the most watched Predators game on national TV in the network’s history. So, what about the doomsday of another sunbelt team reaching the pinnacle of the hockey supremacy?

Maybe hockey is reaching new audiences greater this season than they have since the lockout-shortened 2013 campaign? Could it be a build off the postseason? More likely though is captured excitement of current fans. The one’s that have traditionally turned off the tube when their team is eliminated. Now, these fans are sticking around.

There just might be something to hat-wearing catfish, Honky Tonk and country music. It’s a city that is crazy for hockey and has blended its culture into sports. And as the league looks to expand in less than a month, there is something to be said about that. For all those who wondered just how it could work. That alone is something that one should celebrate in the here and now.