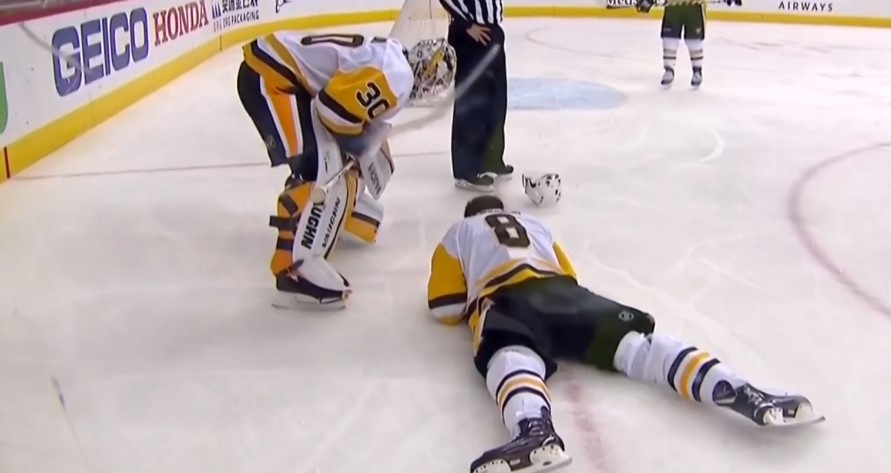 The Penguins had plenty of reasons to feel like nothing went their way in Sunday’s Game 2 at Washington. To name a few:

All of those bad breaks might have mattered just a little less, though, if the Penguins hadn’t once again put themselves behind the eight ball by showing up late.

Much like in Game 1, Washington took advantage of an early opportunity just 1:26 in when captain Alex Ovechkin collected an errant pass from Hornqvist and rifled it past Murray. Later in the period, Jakub Vrana scored shortly after Brett Connolly tied up the goalie’s pad, which led to the Penguins’ failed coach’s challenge.

You make the call. Was this goalie interference by Brett Connolly?

“I was pretty disappointed,” Murray said. “As a goalie you just want to be able to do your job. When something like that happens and you can’t do it, you just want to see the rule be upheld.”

The Capitals drove possession in the first, outshooting the Penguins, 20-10, and outchancing them, 11-7. Then Connolly padded the lead to 3-0 on a breakaway two minutes into the second.

“Our first period was probably one of our worst in this playoff,” Hornqvist said.

“We need to have a better start. We need more pushback right from the drop of the puck,” said head coach Mike Sullivan. “Listen, we knew they were going to come out hard; we’re up 1-0 after the first game. We didn’t match the urgency.”

“What I really liked was the response we had. We were a whole lot better in the second and third.”

The Penguins dominated the second period, outshooting the Capitals 16-6 and outchancing them 12-7. Pittsburgh got on the board with a seeing-eye shot through traffic from defenseman Kris Letang, cutting Washington’s lead to 3-1. A second chance from Letang shortly after that went through Capitals goaltender Braden Holtby, but trickled just off to the side of the net.

They lost Dumoulin in that period to the hit from Wilson, followed by a second hit from Ovechkin, leaving them with five defensemen for the balance of the game.

Brian Dumoulin takes a hit to the head from Tom Wilson and then gets rocked by Alex Ovechkin pic.twitter.com/TYbJCrvHx5

“I didn’t have a chance to see it,” Letang said. “I was following the puck and I just saw him laying there. I didn’t want to watch it [after], either. We all know who [Wiilson] is and what he does on the ice, so I don’t really have a comment. We expect that.”

“It’s tough; he’s one of our best defensemen,” Sullivan said. “When you lose a guy that early in the game, you have to find ways to make up the contribution he makes. He’s an important player for us, so it presents a big challenge for the rest of the defensemen.”

Then came Hornqvist’s disallowed goal in the third.

you're the ref…goal or no goal, what's your call? pic.twitter.com/FEvTK0YBK2

“My view was that it’s 100 percent a goal,” Sullivan said. “When you blow it up, you can see the white. It’s behind the post. We respectfully disagree with the league and their ruling, but that’s not anything we can control.”

“I understand what they’re saying; they don’t have a clear view of the puck over the line,” captain Sidney Crosby said. “But I think you can clearly see if the puck’s on its edge behind the post, it’s not possible for it to touch the line. I don’t know the angles they have, but the one I saw looked pretty clear that it had to be a goal.”

“I thought it was in from my angle,” Hornqvist said. “That’s hockey. What can you do right now?”

By the end of the contest, the Penguins had negated the Capitals’ early advantage, edging them in shots (33-32) and scoring chances (25-24). Unlike Thursday’s Game 1, though, there would be no quick spurt of goals to help them make up the difference on the scoreboard. Nicklas Backstrom’s empty-nettter with seven seconds remaining iced the 4-1 final score.

“They’re in their building, they came with a push and I don’t think physically we matched their compete,” Letang said. “You saw in the second and third period, we had our way against them. We had tons of chances to tie it; we didn’t. We have to learn the game’s 60 minutes.”

That’s something the Penguins have repeatedly struggled with this season. They’ll need to work it out before returning home to PPG Paints Arena for Tuesday’s Game 3 – a game in which they could conceivably be missing Malkin, speedy winger and penalty killer Carl Hagelin (upper-body injury) and now their most reliable defender in Dumoulin.

“We know it’s going to be a long series; it’s two good teams going after it,” Hornqvist said. “Learn from this and make sure we have a better start.”