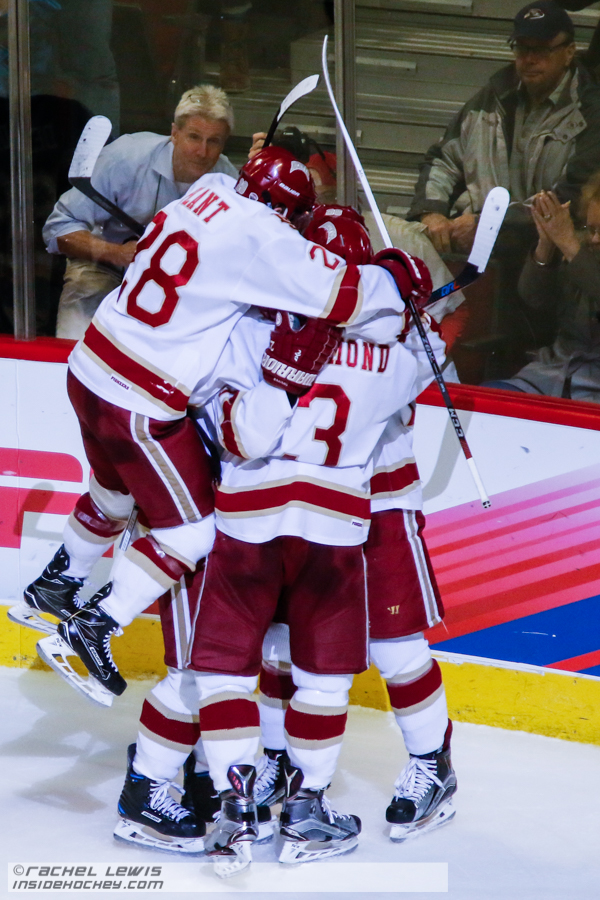 October rarely brings postseason-caliber hockey. Teams are getting used to the new players and trying to knock out the early season cobwebs. Occasionally, there is a show of college hockey in postseason form before Halloween. That happened on Friday night when the defending National Champion and top-ranked Denver Pioneers traveled to Boston to battle the 6th ranked Boston University Terriers. The game featured top goalies, dominant offensive talent, stars, depth players, and a frantic finish.

Denver roared out of the gate in the first period, outshooting the Terriers 12-6 and claiming a 2-0 lead in the first five minutes. Jake Durflinger put home a rebound off BU goalie Jake Oettinger’s pads only 2:51 into the game. On that same sequence, Ryan Cloonan was called for a hooking penalty.

Only 1:03 later, Colin Staub scored a power-play goal to put Denver up 2-0. Agganis Arena was quiet. BU needed a spark to get into the game. They found it on their third line. Just after the halfway point of the first, Drew Melanson whipped a pass across the goalie crease to Freshman Ty Amonte for a bad angled bullet. The 19-year-old scored his first collegiate goal and the 22-year-old graduate transfer recorded his first BU assist. 1:38 later, Bobo Carpenter continued his dominant junior season. He scored a power-play goal after Jake Durflinger was called for interference. Carpenter put home his sixth goal of the year on a drop pass from Jordan Greenway and the Terriers tied the game.

Denver did not let up. With 2:58 left in the period, Ty Amonte was called for slashing. 1:26 into the power play, Colin Staub returned the lead to Denver with a turn-around shot off a rebound. The goal was Staub’s second of the game and of the season. Denver took that 3-2 lead into the intermission.

The second period was scoreless but thrilling. BU outshot the Pioneers 11-8. They made reigning Mike Richter Award winner Tanner Jaillet sweat. But the senior held his ground. Denver also got their share of chances, particularly on a power play following a Chase Phelps holding call. The Pioneers had Oettinger sprawled on the ice, spread eagle, and just could not get a goal. Oettinger played some of the best games of his career, stifling a powerful attack to keep his team alive. The crowd rose to their feet to applaud the effort of their goalie.

The Terriers kept up the attack in the third, outshooting the Pioneers 12-6. Dante Fabbro beat Jaillet after the period’s halfway mark on a wicked wrister from the high slot. The teams looked like they’d play overtime. Troy Terry had other ideas. With 16 seconds left in regulation, the junior ripped a shot by Oettinger from the left circle. An icing call against BU ended any chance of a miracle ending. Denver walked off the Agganis ice with a 4-3 victory in a classic game.

Both coaches were complimentary of each other after the game. Denver head coach Jim Montgomery thought BU was better most of the way.

“Every line caused problems for us. We double shifted our top lines. Our fourth line, which is all freshmen, did not perform that well tonight. We’ll work on that. But we’re happy to get a win against that caliber of opponent.”

Denver runs their record to 3-0-2. They’ve gone 4-1 against BU in the last five meetings since 2016. The nation’s top team continues their east coast trip on Saturday night with a game against the 19th ranked Boston College Eagles at Conte Forum. Puck drops at 7 pm.

Terrier head coach David Quinn was disappointed with the loss but took some encouragement.

“I’m proud of my team. I’m proud of how we fought and came back. That could’ve gotten ugly at 2-0 only five minutes in. It didn’t. We have resilience. We just need to learn how to close out games like that.”

BU drops their record to 3-3-1. They’ll look to up their Hockey East record with a trip to Schneider Arena in Providence, RI, to play the 11th ranked Providence College Friars. Puck drops at 7 pm.