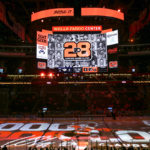 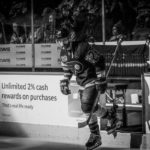 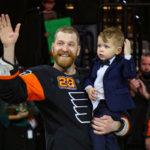 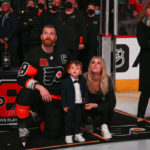 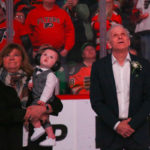 Nicole Giroux holding her grandson, Palmer, standing next to her husband, Raymond, watching a video tribute honoring their son, Claude. 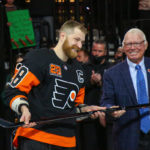 Bob Clarke gives Claude Giroux a silver stick commemorating his achievement of playing 1000 NHL games. Both Bob and Claude are the only two Flyers to play 1000 games with the organization

The Philadelphia Flyers honored Claude Giroux with a pre-game ceremony for his accomplishment for playing 1000 NHL games. He was awarded with a silver stick commemorating his achievement along with a pair of miniature silver sticks for his two sons. Also, a tribute video was displayed on the arena video screens for him and all of the fans to see. Attending this event was his wife, Ryanne, two sons, Gavin and Palmer, and his parents, Nicole and Raymond Giroux. During the presentation of gifts was former Flyer Captain Bob Clarke and teammates Scott Laughton and Sean Couturier.