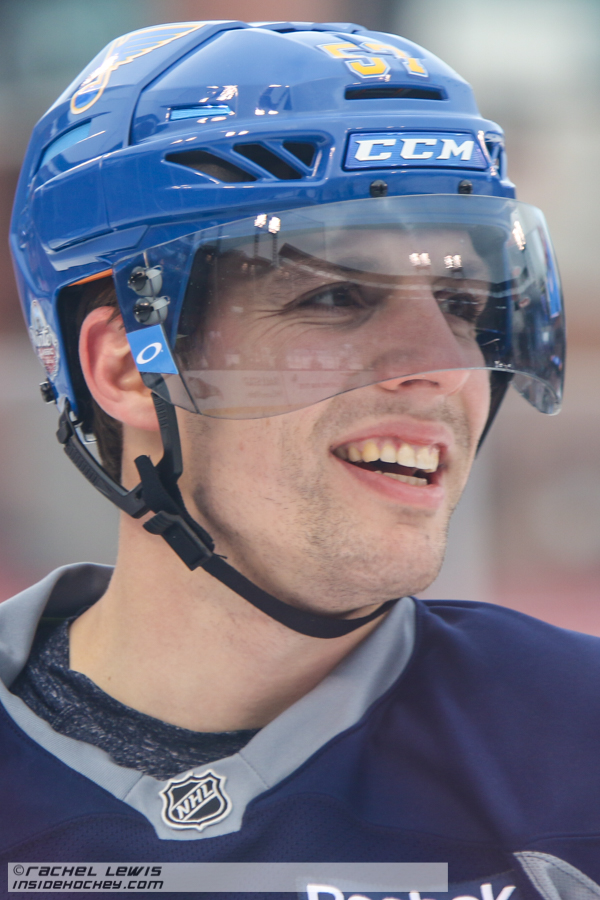 The LA Kings hosted the St. Louis Blues on Friday night, and they were promptly disadvantaged by a David Perron power play goal, scored at 2:08 of period one. This after having had a six-game winning streak dashed by a three-game losing streak (with one OT point) that put the LA squad sixth in the West with 22 points.

Would they be fragile enough to collapse after getting down to start the game? No chance. The score didn’t show it, but the Kings controlled much of the play to finish the first period and on into the second. And they were rewarded later on in P2 when Jeff Carter got his fifth goal of the year, streaking diagonally across the top of the crease and shifting to his backhand before putting it in, all the while he was being crashed upon from behind and found himself flying over the goalie’s legs as the goal went in. So it was 1-1.

Elsewhere in the LA lineup, notably, Rasmus Kupari debuted. The Finn had had nine points in eight games to lead the team’s San Diego affiliate before his call-up. He was a first-round pick (20thoverall) in 2018. Last year, he played 27 games for the Reign with 6-2-8 points.

Kupari was on a line with Kempe and Trevor Moore. On the night, the trio had five shots and five hits. In the past, 20 players have scored in their Kings’ debut. It wasn’t to be for Kupari on this night. His shining moment was a dash down the left boards and move towards the front of the net, accompanied by a pass to himself and quick direct of the puck to the net. The netminder had his leg down, and the puck hit the pad.

Kupari won the ensuing faceoff and had another chance after the puck drop. He’s speedy and confident. That time it was a shot from the point that hit him in the back, dropped down, and that he had a chance to sweep towards the net. The puck went wide. He also blocked a crucial shot late in the game.

He said after, “I just tried to keep it simple and use my speed.” He noted that the difference from AHL to NHL is, “Of course, like, the game is a little faster, and I think it’s more organized over here. Guys are smarter and more skilled. This could be a good thing for my game as well.”

The additional scoring came in the third period, starting early. The Kings had a bit of PP time left over to start the period, and they scored, in the person of Dustin Brown, at 37 seconds. It marked his 12th goal of the year. He has now played more than 1200 NHL games and has 311 goals. This goal doubles Doughty’s six, and Doughty is the next closest player on the team in goals.

Brown, when not on the power play, was with Iafallo and Kopitar on the LA first line. He is top-ten in goal scoring in the entire NHL right now.

Brown, who had eight shots, said after, “That’s a little surprising. A lot of it was shooting at the goalie’s on purpose, knowing I couldn’t score from there.” The shots were for the purpose of the rebound.

Adrian Kempe provided one of the third period’s thrilling moments, picking up a puck passed up by Iafallo as Kempe came out of the sin bin and going in alone on the right side. He deked but was stopped by the goalie’s foot, shot out at the last minute.

The Kings continued to control the play as period three wore on, and they held their 2-1 lead. And then they blew it. The Blues had the extra man late with the goalie pulled, and yet they didn’t score in a typical zone set-up. They were rushing, and David Perron nailed a shot to the short side up high. The Kings had been caught up ice, hungry for the empty net. Both Kopitar and Brown were way behind the play. Not smart. And their coach was testy  about it after. When asked if they chased the empty net too much, he said, “One-hundred percent. I couldn’t have said it better myself.”

They paid during OT when they were on a delayed penalty for, it was presumed, too many men. It never got called. The Blues had the extra player due to the goalie pull, and the puck came to Mike Hoffman on a one-timer from Krug. O’Reilly started the play.

Meanwhile, the team from down the road, Anaheim, was in Colorado, blowing another lead. They were up 2-0 but saw the Avs come back to tie 2-2. They went to OT and lost. Coach Eakins ignored the blown lead and said it was “A very good effort.” Later, he added, “Our guys played hard. I am impressed with our guys’ mindset right now …. They’re not going and trying to hold onto a game right now, they’re trying to win it.” Huh?

Shouldn’t holding the lead come before that, because if you do that, guess what? You’re going to win. But if trying to win makes you lose, well, that just doesn’t make sense.

Anaheim and the Avs will play in Colorado once more, while the Kings host St Louis again. Next week, LA and Anaheim get after each other on two nights, Monday and Wednesday in Anaheim.

Brian Kennedy is a PHWA member and credentialed NHL media member. While life is stifled by Covid, he is reporting from his SoCal home using NHL- and team-provided materials.